The global pickup in growth has pulled up Asia strongly; we should nonetheless be aware of potential pitfalls if rates keep rising and the US dollar rallies.
Taimur Baig, Radhika Rao, Ma Tieying, Suvro Sarkar16 Apr 2018

Photo credit: AFP Photo
The global pickup in growth has pulled up Asia strongly. China, having decelerated in recent years, is presently characterised by flat momentum, with strong trade offsetting liquidity tightening and pollution curbs. Asia’s open, trade-oriented economies continue to report robust exports, while even those not substantially reliant on trade are enjoying positive spillovers. One exception is India, which has run into a series of difficulties lately, with fiscal slippage, widening trade deficit, and bank governance problems dominating headlines. We do not see any quick-fixes to these problems, unfortunately.
The persistence of a broadly weak dollar and stable rates can largely neutralise the significant drag stemming from equity markets, in our view. So far in this cycle, the US dollar’s weakness has been a source of support for Emerging Markets (EM).
Typically, a US rate-hike cycle is accompanied by flows heading back to US-dollar assets, causing funding problems and foreign exchange (FX) pressures on EM, but this time has been different, with sentiment on EM remaining positive, with no funding problems so far.
We should nonetheless be aware of potential pitfalls if rates keep rising and the US dollar rallies. This scenario could cause stress in several economies and markets, as per our analysis. We approach this issue from the perspective of external funding needs in Asia.
Analysing the potential for funding problems runs into some difficulties as most Asian countries only report short-term debt data on original maturity basis. What one preferably wants to know is how much external foreign debt is falling due in a year, which would entail adding both short-term debt and long-term debt on a residual maturity basis. We have residual maturity debt data from national authorities of India, Indonesia, and the Philippines. Among the rest of Asian economies, we would ideally have the same for China and Malaysia in particular, both of which have shown potential for capital outflow and funding stress in recent years.
One way to get around this problem is to track the limited, original maturity debt data over time to discern potential lumpiness of payments due, which may mimic the larger set of residual debt. With this caveat in mind, we have estimated the 2018 external financing needs of seven key Asian economies. To do this, we add the current account balance with the debt due figures for the year. If a country is projected to run a current account surplus, it enters the aggregation as a negative entry, reducing the gross external funding needs. A useful way to compare financing needs across countries is to scale them in relation to central bank FX reserves. This underscores the buffer in place to deal with any potential tightening of external funding.
Figure 5 summarises our analysis. For the seven selected countries, we look at reserves to gross external financing in 2013 (actual) and 2018 (projected). The findings are instructive. First, the estimates show that economies with ample current account surpluses and reserves, such as South Korea and Taiwan, can handle their large funding needs readily. Indeed, the funding cover of these two economies have improved, from an already comfortable position, over the last half a decade.

Second, China has considerable reserves and still runs a current account surplus, yet its funding needs are also formidable, and the cover has worsened since 2013. The decline in the reserves to external financing ratio during this period reflects the 2014/2015 phase when the People’s Bank of China (PBOC) incurred a reserves loss of about USD1t. Since then, the FX reserves position has recovered somewhat, but the current account surplus has gone down from 3% of GDP to below 1.5% of GDP. Coupled with the fact that in recent years Chinese companies have borrowed heavily in external markets, it would follow that the next episode of dollar funding crunch could be problematic for some of them, which in turn would raise pressure on the PBOC to intervene in the markets (which in turn will come with added complications and distortions).

Third, two economies that were hurt by the last dollar rally episode, India and Indonesia, will not be out of the woods this time either. While both countries’ central banks have diligently improved their reserves base in recent years, the funding cover has improved only marginally, especially in comparison with the large surplus economies in the neighbourhood.

Fourth, if oil prices remain high, then Malaysia, despite its large external funding needs, could perhaps ride out a potential dollar crunch. But commodity markets could readily correct with EM economies, affecting Malaysia as well. We therefore think that India, Indonesia, and Malaysia’s fixed income and exchange rate markets will face the brunt of adjustment if dollar funding conditions were to tighten during this year. 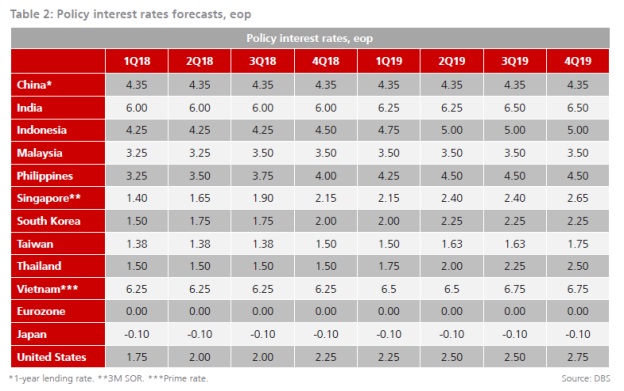 Click here to see all our articles on CIO's 2Q18 outlook.