SGD Rates: What does a more aggressive Fed mean?

The Fed is serious about hiking. What does it mean for SGD rates?
Eugene Leow10 Jan 2022

Market participants are finally convinced that the Fed intends to / and will be able to withdraw exceedingly loose monetary policy. There were two rounds of adjustments 2021 but those are still insufficient to reflect Fed tightening. Another wave of adjustment kicked off at the start of this year. We have also revised our outlook, seeing three Fed hikes in 2022 and another three in 2023. This would take the Fed funds rate upper bound to 175bps, back to the pre-pandemic level. What does this mean for SGD rates?

In absolute terms, this means that short-term SGD rates will rise earlier and end higher over our forecast horizon out to 2023. Under normal conditions, a meaningful rise in SORA, SIBOR and SOR tends to take place only when the Fed starts to hike rates in earnest, an event we think would take place in March. The passthrough, however, is less clear cut and can be viewed through several lenses. 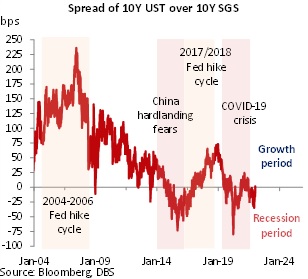 First, economic conditions matter. Rate hikes under recovery conditions imply less passthrough unto SGD rates. This can be seen in the 2004/06 as well as the 2017/2018 hike cycles. Through periods of economic expansions (which tends to coincide with USD weakness), the Monetary Authority of Singapore (MAS) tends to maintain a appreciatory SGDNEER stance to curb inflationary pressures. Keeping interest rates parity dynamics in mind, SGD rates tend to be lower than USD rates through these periods. Singapore (and the world’s) economic recovery from the pandemic crisis is uncomplete. Last year, we bet on SGD rates outperformance relative to USD rates (from a receive perspective). This played out from stretched levels, but never quite got to levels which we thought would be more reflective of better economic conditions. With the pandemic entering the third, there is a decent chance that tourism could finally stage a more meaningful recovery, allowing the MAS to tighten again, perhaps as early as April. All else equal, this should put downward pressures on SGD rates relative to USD rates. Put another way, SGD rates are unlikely to rise by the same magnitude as USD rates in the coming hike cycle.

If the Fed persists in hiking through tough economic conditions (such as in 2015/2016), SGD rates tend to display higher beta, rising much more than their USD counterparts. However, we do not see this happening this round.

Second, the state of where SGD rates are relative to USD rates are when the hike cycle begins matters. SGD rates, due to the nature of the MAS’s use of SGDNEER for monetary policy, can be viewed as USD rates with a premium or discount. So effectively, the drivers are USD rates, FX dynamics and relative liquidity dynamics which are captured in the radar chart below. Current SGD rates (especially those out to the 5Y tenor) look elevated compared to USD rates Most of this is due to perceived tighter SGD liquidity compared to USD liquidity. FX stresses have actually eased compared to three months ago. The upshot is SGD rates are already at a premium, which offers some buffer in against Fed hikes.

We are doubling down on our view of SGD rates outperformance versus USD rates. This is something that we have highlighted (see here). Back then, we thought that SGD rates look too high compared to USD rates and that the risks are skewed towards earlier and more tightening from the Fed. This is currently playing out.
With Fed hikes brought forward, it should be even easier (and earlier) for USD rates to climb above SGD rates. It could well happen after 1-2 Fed hikes. While this trade has played out, we think pay SOFR versus receive SORA in the longer tenors (5Y to 10Y) still look compelling. For example, the SGD premium in the 10Y tenor could go from a premium of 15bps to a discount if the global economy holds up as we expect.

For Singapore, there are two issues to watch. If the Omicron wave picks up in the coming weeks, there could be opportunities to express this idea at better levels, especially if this wave places some FX stress. Secondly, Singapore’s 4Q GDP proved to be strong (see here). This has increased the odds of MAS tightening again in April. All else equal, this should also lead to SGD rates outperformance vis-à-vis USD rates over the medium term.