The Fed is serious about hiking. How fast and how high can it go?
Eugene Leow10 Jan 2022

It has now been well-telegraphed that the Federal Reserve intends to hike rates this year. This incremental increase in hawkishness culminated in accelerated taper being announced in December, setting the stage for earlier rate hikes if needed. Moreover, the updated dotplot also indicates three hikes in 2022, followed by another three in 2023. This would allow the Fed to return to pre-pandemic levels of interest rates some time in mid-2023. There are implicit limits on how fast, how long and how high the Fed can go. While these tend to impact the shorter tenors more (3Y or less), there are still ramifications longer term rates as market participants ponder where the terminal rate would be. 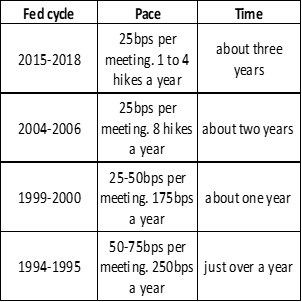 Market participants have become conditioned to a Fed that tends to be slower when it comes to hiking rates. Note that this is apparent in the Fed’s actions in the post-Global Financial Crisis environment, even before flexible average inflation target (FAIT) framework was introduced in 2020. To put things into context, in the recent hike cycle, the Fed hiked at a maximum pace of once per quarter in 2018 (total of 100bps per year). When events were dicey in 2015/2016 due to China hardlanding worries, the Fed only managed one hike per year. Contrast this to the 2004-2006 cycle where the Fed hiked once per meeting (eight times or 200bps per year). If we go further back to the 90s, there have even been instances of 50-75bps hike in a meeting. Gyrations in the Fed funds rate were even larger during the stagflation years in the 1970s and 1980s when inflation was still a serious priority for the Fed. The upshot is that 25bps/quarter should be viewed as the default pace if growth/inflation stays firm. This seems to be the implicit pace limit unless communicated otherwise. That said, the probability that the Fed goes faster than this pace should no longer be easily dismissed. 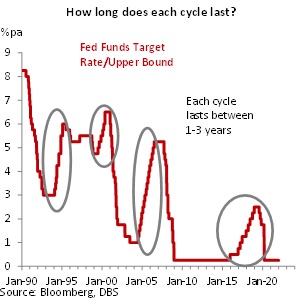 Consideration 2 – the window to hike

The Fed is also constrained by time. Economic expansions have a finite span, which also means that the Fed has a window to hike rates. In the post-GFC expansion, the recovery was somewhat weak and intersperse with multiple shocks (Eurozone crisis, China hardlanding worries, Trade war). While the expansion was long, the rate hike period was just about three years (end-2015 to 2018). This would be shortened to about two years if we ignore 2015/16 where the Fed only hiked once per year. In the preceding cycle, the Fed tightening over two years from mid-2004 to mid-2006. In the 1990s, the two hike cycles lasted about a year. The point is that each Fed hike cycle lasts about 1-3 years within an economic expansion phase. If the priority is to support growth, allow inflation overshoot, the Fed may well have less time to bring rates up before the next economic shock hits. This probably explains why the market is convinced that the Fed will be able to hike in 2022 and 2023 but less so thereafter. It can be argued that the Fed was too cautious in the post-GFC environment and missed the window to bring higher, allowing a better cushion to be put in place for the next downturn.

The Fed is also constrained by the neutral rate which has been falling over the past few decades. While the dotplot has the neutral nominal rate at 2.5% (translating into a real rate of zero assuming inflation of 2.5%), market participants are understandably sceptical. Since the peak in the early 1980s, USD interest rates have been broadly trending lower as growth/inflation slows. In the recent hike cycle, the Fed funds rate barely got to 2.5% in 2018 before the Fed was forced to reverse.

The neutral rate is notoriously difficult to pinpoint. The Federal Reserve Bank of Richmond publishes the Lubok-Matthes Natural Rate of Interest. This is the “hypothetical interest rate that is consistent with economic and price stability.” The latest median reading (albeit slightly dated) puts the natural real rate at close to zero. If we assume average inflation in the US to be 2%, then the nominal neutral rate should be close to 2%, given current economic settings.

We can also tease out how the market sees real rates by using the spread of the 5Y5Y USD OIS versus the 5Y5Y inflation swap. By this measure, the medium-term real rate has been hovering around zero since 2012. It is only in the post pandemic environment that 5Y5Y real rates fell and stayed deeply negative. Current readings are at -0.83% (5Y5Y rates at 1.78% and 5Y5Y breakeven at 2.48%), still very accommodative by any measure. In short, the market sees real (and nominal) rates being depressed for years (well beyond the pandemic), explaining the current low market estimate of the Fed’s terminal rate. We are not entirely convinced that this pricing is correct, but more of that later.

These considerations have implications on where the upper and lower bounds of where short-term rates should be. Assuming no major growth/inflation shock, we would reasonably expect the Fed to be able to hike 2-4 times a year. This would place the upper limit of hikes at eight by end-2024, if the Fed chooses to hike in March (as QE ends) and follows through every quarter. This would put the Fed funds rate upper bound at 2.25%, close to the 2.5% long-term neutral found in the dotplot. Note that this is a benign scenario where growth and inflation hold up. Short of that, it would be reasonable to assume some downside risks to this. We do think that short-tenor rates (2Y and below) may have adequately factored in Fed risks and could provide some protection against duration risks and/or negative economic shocks.

Further out, we think there are significant uncertainties. While the market has been conditioned to downside economic / rates risks and are reflecting this in the low terminal rate readings, we are not convinced. Risks to upside in rates should also be considered. The structural issues driving inflation (greater investment due to decarbonisation and deglobalisation) are unlikely to fade. In which case, inflation would be higher (compared to the post-GFC landscape) over the coming decade, which could well mean that the Fed’s terminal rate can be higher. If the Fed extends hikes beyond 2023, this could put pressure on 3Y-5Y UST. 10Y yields at 1.76% still looks a tad low and we do see scope for yields to potentially head towards the upper part of its 2-2.50% range by the end of the year. From a strategy perspective, we do think that the total returns outlook for 5Y-10Y UST look better, especially as yields are now meaningfully higher than where they were a year ago and should provide a bigger cushion. It could well be a two-way market in 2022 with opportunities to go long (when yields are meaningfully higher) and short for the longer tenors, compared to 2021, where we generally felt that USTs were simply too expensive. If 10Y yields drive towards close to 2.0%, we suspect that there would be interest by asset managers to start accumulating.