Inflation has continued to surprise on the upside, with December print at 4%yoy, the highest reading since Feb13. Core inflation has also risen to 2.1%, highest since 2014. Transport inflation was the key driver, registering 13.7% on the back of a combination of higher COE premiums and fuel prices. Beyond that, higher housing and utilities prices exacerbated the domestic price pressure. 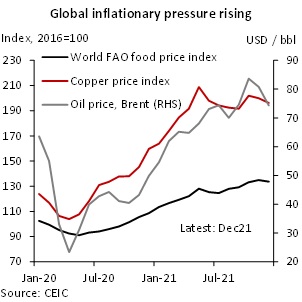 Externally, energy and commodity prices (e.g., metal), as well as some agricultural product prices are rising, leading to costlier wholesale prices and higher production and construction costs. Asset inflation is also building up. Property prices in Singapore have remained resilient for most part of the pandemic period. The confluence of domestic and external inflationary pressure has significantly altered the trajectory of inflation. With the economy firmly on the recovery path and growth momentum likely to be sustained in the coming quarter, inflation is expected to remain elevated throughout 2022. 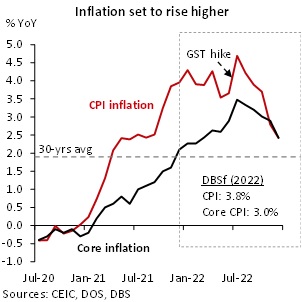 We now expect headline inflation to average 3.8% in 2022, up from our previous forecast of 2.8%, higher than the new official forecast range of 2.5%-3.5%. The price barometer will likely hover around the 4% level in the coming months before tapering off towards the end of the year due to high base effect.

Core inflation is also projected to be higher at 3.0%, up from 0.9% in 2021. And to add to the concern, there is risk that the upcoming GST hike may take effect as early as July this year. Expect another spike in inflation should the GST be introduced. Considering the above, there is urgency for policymakers to anchor inflation expectation and to buffer imported inflation.

In line with the one percentage increase in the 2022 official inflation forecasts, the Monetary Authority of Singapore “slightly” increased the slope of the SGD NEER policy band an inter-meeting on 25 January. The policy band was last returned to a gradual and modest appreciation path at the scheduled meeting in October 2021.

According to our model, the SGD NEER was above the policy band last Friday and Monday. Today’s announcement affirmed the annual appreciation pace from October was likely to be steeper at 1% instead of our original 0.5% estimate, at the floor of the previous 1-2% forecast range for core inflation. Hence, we estimate the band to rise at a slightly increased pace of 2% a year starting today. 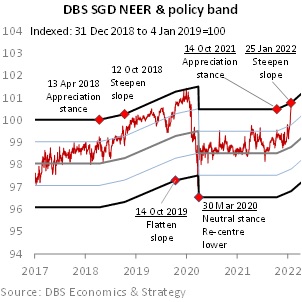 Another tightening at the scheduled policy meeting in April is possible if core inflation exceeds expectation again. As per the policy statement today, the central bank expects core inflation to pick up from 2.1% YoY in December towards 3% (the upper bound of its new forecast range) by mid-year before moderating. The prospect for an upward re-centring of the policy band cannot be dismissed; this would reverse the downward re-centring in March 2020 to cushion Singapore during the Covid outbreak.

As for USD/SGD, its downside is limited by the new policy band at current levels. In fact, the floor of the band of has been rising with a globally stronger USD ahead of tomorrow’s FOMC meeting. Given today’s surprise by MAS, one cannot help but be alert to similar surprises by the Fed too.

Nonetheless, the tighter SGD NEER policy should increase the SGD’s resilience to the USD’s uptrend as witnessed in 2018-2019. Hence, we now forecast USD/SGD to peak at 1.37 instead 1.39 in 3Q22.

SGD Rates: How to navigate twin tightening by the MAS and the Fed

We maintain that SGD rates outperformance (from a receive perspective) versus USD rates remains the best way to navigate twin tightening by the MAS and the Fed. There has already been a sizable move over the past few months, but we suspect that more is to come (with SGD rates driving into a deeper discount relative to USD rates) over the coming quarters. That said, sentiment plays a key role in determining whether SGD rates do well. The equities space is already jittery on the back of Fed hike expectations and geopolitical risks surrounding Ukraine are elevated. These could lead to bouts of USD strength offering opportunities to establish these trades at more favourable levels. We are also mindful of the upcoming FOMC meeting where there is risk that the Fed may turn incrementally hawkish again.