Assessing the impact from Russian sanctions

We assess the impact on credit stemming from sanctions on Russia.
Chang Wei Liang03 Mar 2022

We update our assessment of the credit market impact stemming from the conflict between Russia and the West beyond our first reactions (see Macro Strategy Credit: Stresses amid Ukraine and China risks, 25 Feb 2022). We had initially expected the global growth outlook to dim due to sanctions-induced supply chain shocks and soaring material prices, with European credit facing the largest downside risks. Our subsequent analysis of the geopolitical developments and the rollout of sanctions has given us no reason to change our view.

On the military front, stiff resistance by the Ukrainians implies that the war could be prolonged and marked by fierce fighting, which can only cause global opposition to Russian aggression to strengthen. Even historically neutral nations such as Switzerland had introduced sanctions this week, and risks of increased political appetite to tighten sanctions further cannot be underestimated.

Meanwhile, we have also seen that the stream of sanctions on Russia has been incrementally tuned up in severity, as consensus forms over the response to Russian aggression. Early relief at carve-outs for the energy sector was overturned by fears of a deeper crisis after the US and Europe announced bans on several Russian banks from the SWIFT payments network. Sanctions on the Russian central bank had also denied it the ability to defend the RUB in international markets, resulting in RUB losses of over 25%, an emergency CBR rate hike to 20%, the closure of the stock market, run on ATMs, and controls on capital outflows. A deep recession in Russia looms on the top of SWIFT payment disruptions, and risks of spillovers via the trade and banking channels are elevated.

Given bans on many Russian banks from accessing the SWIFT payment system, we expect disruptions to cascade into the trading of goods and services. Already, the three largest European shipping carriers have announced that they will suspend all container shipping to and from Russia. This is not a surprise, given the extensive and onerous checks now needed for settlement after the SWIFT sanctions on banks.

On notional size alone, the impact on European exports looks rather manageable. Russia is only a medium-sized economy comparable to Brazil and Australia in GDP. As such, for EU27 (ex-UK), only around 4.1% of total exports go to Russia, contributing just 0.6% of total EU27 GDP. Russia’s goods and services imports total to around USD360bn on an annual basis, which is under 0.4% of global GDP.

However, the world imports from Russia a range of important commodities ranging from base metals, precious metals, and agricultural products, and these are hard to replace on short notice. Energy is not completely immune from sanction impact, though they are deliberately left out. Banks are understandably nervous about financing Russian crude for fear of inadvertently breaching sanctions, and Brent prices have surged in response to over $110. As we had earlier anticipated, the impact on supply chains is challenging to mitigate in the short term. At the same time, the economic damage is more costly than what notional trade values show due to cascading impact on other parts of global production.

Beyond trade, the impact of a Russian recession will also migrate through financial channels to international banks with Russian exposure. We list the 10 countries with the largest banking exposure to Russia using BIS data. The list is dominated by European countries, which in total have a sizeable claim of USD92bn on Russian residents as of Q3 2021. This is around 5% of common equity in the European banking system, with the impact to be unevenly felt on specific banks. The good news is that slightly over half are local claims of subsidiaries. If the banks decide to let their Russian subsidiaries fail, losses will be limited to the capital injected. Nevertheless, there will still be significant losses on international claims, on top of write-downs of subsidiaries. An Austrian bank with large exposure to Russia has already announced that it will halt its 2021 dividend payment. Given that Italian and French banks have the two largest exposures to Russia, we remain cautious on credit related to the exposed European banks. 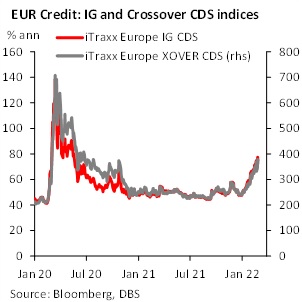 With Europe likely to experience the worst economic damage given extensive trade and banking sector linkage, we expect European credit risk premiums to remain elevated for now. The iTraxx IG and Crossover CDS indices have bounced above 74ps and 360bps respectively since 24 Feb, and are back at levels last seen in 2020. We are cautious on European credit, taking cues from geopolitical tensions and further calibrating on sanctions.

Asian USD credit has not been completely immune to the rise in geopolitical tensions, and increased risk aversion globally. Our DBS Aggregate Credit Spread (DACS) indices show that credit spreads have risen noticeably for China, Indonesia, and India. The spreads of South Korea and Hong Kong have proven more resilient. We believe the main contagion channel is wider EM hard currency fund outflows, as investors fret over Russian debt due to sanctions and an announced freeze on outward interest payments for Russian debt. 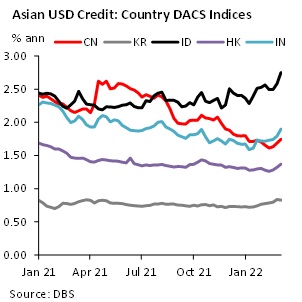 Despite greater market volatility, for now, we think Asian USD credit could still recover in the medium term once outflow pressures abate. Rising oil prices could exacerbate growth concerns and stir inflation for Asian net oil importers. But the absence of outright Chinese and Indian sanctions on Russia suggests that some trade diversion could potentially occur, and that disruptions could be less severe. Furthermore, the medium-term story of economic recovery from reopening remains intact, even if broader volatility has risen due to market upheaval. We maintain our view of relative Asian outperformance against European credit.