Recognising sustained risks to inflation, the US Federal Reserve’s Open Market Committee took its first step toward policy normalisation today with a statement that we deem as focused on price pressures and yet comfortable with the notion that higher interest rates and quantitative tightening won’t undermine the economic outlook materially. The Fed’s statement and actions reflect no concern about stagflation, period.

Median projections made by FOMC members are constructive for the medium term; real GDP growth of over 2% (i.e., above potential) is expected through 2024, with no worsening of labour market conditions and core inflation heading toward 2%. Are these reasonable? We think so, especially if inflation expectations remain anchored, which has been the case so far. The continued stability of inflation expectation would be a function of wage and goods price pressure to dissipate as pandemic related disruptions fade. These two developments will make or break US economic outlook in the coming quarters, and will make the difference between the Fed making steady progress toward normalisation or playing catch-up that will un-nerve the markets. 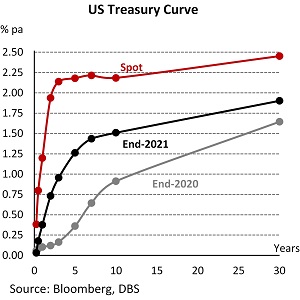 We are adjusting our rate expectations; we see the Fed hiking in every meeting this year, which is six times, and then four more times next year. This would take the Fed funds rate to 2% by end-22, and 3% by end-23. Given the improved balanced sheet of the households and corporates, we think the US economy is capable of absorbing these hikes. An economy that is growing by over 2% in real terms should be able to live with a real positive interest rate of around 1%.

These hikes will come with some risks for those with high leverage, will likely strengthen the growth-to-value narrative in the equity markets, and some degree of spread widening in the credit market is likely. The cyclical strength of the economy is substantial though, from balance sheet to the jobs outlook. As reflected in the FOMC statement, these developments need not cause major dislocation to wealth, investment, or consumption. 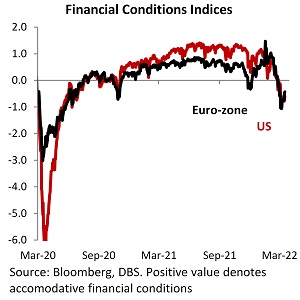 Today’s developments have been unsurprising to global markets, which have had to deal with additional developments in Ukraine and China. We will see some headwind materialise for emerging markets from a hawkish Fed, as has already been the case. But most Asian economies have undergone repeated stress tests with capital flow volatility in the past years, and have shown that their relatively improved reserves and external account position can handle episodes of risk on and off. As long as China’s macro risks are contained, Asia can navigate the Fed’s path.

The market digested the FOMC outcome relatively well as Fed Chair Powell played down stagflation risks. Instead, there was confidence expressed that the recovery is firm. UST curve steepening that took place yesterday (on the back of better risk sentiment) gave way to flattening as the Fed’s resolve to curb inflation drove short-term yields (2-3Y) sharply higher. We would note that the Fed now expects the policy rate to be at 2.88% in 2023 and 2024, implying restrictive monetary settings compared to the neutral of 2.375% (downwardly revised from 2.50%).

We hold a similar view as the Fed and see another 6 hikes this year (once per meeting) before moderating to 4 in next year (once per quarter), taking the Fed funds rate upper bound to 3%. We are somewhat puzzled by the downshift in the neutral rate. Signs are still pointing to structurally higher inflation as the world grapples with deglobalization and an increasing push towards decarbonisation. There are a few ways to view this. First, it could be a more realistic view of neutral as the Fed signals that this projection should not be viewed as a cap. Hence, over the longer term, the Fed can toggle around the rate to deal with economic cycles. Second, the Fed may be worried about how QT (which it has signalled to be imminent) could be interpreted and acted pre-emptively to stabilize long-end rates. 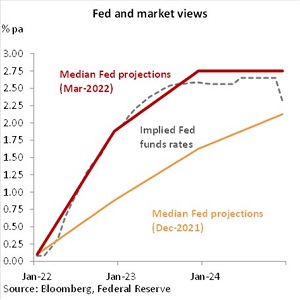 We are neutral on rates out to the belly (5Y), noting that the Fed and the market (and DBS Group Research) is pretty much in agreement on rates out to 2023. It would be more interesting to fade extremes (in either direction) when they do occur. We are somewhat wary on duration (10Y onwards) and think that the market may be underestimating QT (we think QT will start in the immediate two meetings) and the eventual selling of MBS (possible in 2023). We think that the curve might be overly flat in the short term and there is scope for modest steepening. However, in the medium term, a very flat (to inverted curve) towards the tail end of tightening (2H23) is probably hard to avoid.