We assess the shift in balance of payments, liquidity, and new equilibrium.
Radhika Rao23 Mar 2022

Photo credit: AFP Photo
A let-up in ‘impossible trinity’ faced by the central bank, during the pandemic, is underway. External trade and balance of payments are likely to moderate after three years of strength, which will have repercussions for liquidity as well as the currency. We entered the year expecting the Reserve Bank of India to be active in defending the currency after an extended period of fighting-off appreciation pressures. That inclination is likely to continue.

The external sector emerged as a key source of support for headline GDP for much of 2020 and 2021, with goods exports among the first few returning to pre-pandemic levels. Various catalysts helped, including inventory restocking, stronger global growth (0.6 correlation) and segment-specific boost (engineering, pharma, electronics, petroleum, etc.). Besides global GDP, India also tracks global exports as shown in the chart below. 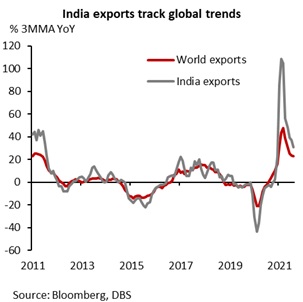 The ground has been shifting since 2HFY22. Encouragingly, exports are on course to not only meet but better the government’s export target of a record of US$400bn in FY22 on higher manufactured goods and commodities. Any material boost to the trade balance is, however, negated by a surge in imports, as the oil import bill doubled to US$141bn by Feb22 vs $72bn in FY21, alongside high non-oil purchases, driven by commodities, gold (103% yoy) and electronics (34% yoy). Imports of crude and petroleum rose on both volume and price effects. Accordingly, the trade balance doubled in the first eleven months of FY22 vs the year before and is poised to end FY22 with a wide deficit of $190-$195bn. 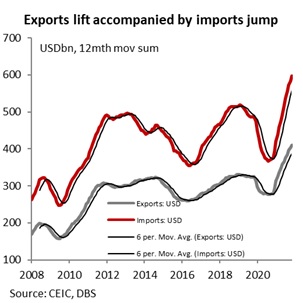 Notably, the net terms of trade (TOT) gauge have moderated, implying that export prices are rising slower than import prices. 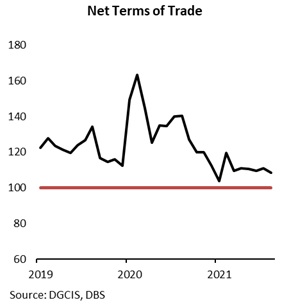 Risks are stacked against the trade balance in FY23. Exports are still expected to reap the benefit of better-faring manufactured goods demand and the potential boost from fiscal incentives to firms across sectors like electronics, specialty chemicals, project goods, auto, etc. Material progress on free trade agreements with countries like Australia, the Middle East, the UK etc., via early harvest agreements and negotiations on deeper collaboration, thereafter, will also be a medium-term tailwind for the external sector. However, this optimism will encounter a challenging global growth backdrop in 2HFY23, on likely moderating growth in the US, China, and Eurozone.

Meanwhile, nominal imports are expected to swell on a high commodity bill (oil and fossils) and demand normalisation. Restrictions on mobility and activity have been lifted, which will lead to further normalisation in business as well as demand cycles. Tying in our house view for oil prices to stay elevated at above US$95bl in 2022, we expect the FY23 goods trade deficit to widen to $220-230bn.

Accordingly, a primary risk to our view is a sharp correction in oil prices, which will bode well for trade dynamics, helping to narrow the shortfall.

Balance of payments to moderate

The current account is likely to register -1.8% of GDP deficit in FY22 owing to a significant widening in the goods trade deficit in 2H even as service export earnings are holding up, vs 0.9% in FY21. A wider trade gap in 2H was accompanied by moderation in the capital account, on foreign portfolio outflows (-$20bn in 3Q-4QFY) even as FDI rose by $15bn between Oct21-Jan22. Still, commercial borrowings were frontloaded to capture more attractive offshore borrowing costs. This mix will likely see the 2H balance of payments slipping into a deficit, narrowing the full-year surplus to $40bn vs FY21’s $87bn. 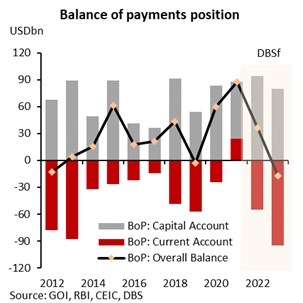 Into FY23, we expect the BOP to moderate
(-$17bn) after three years of surplus due to:

a) High imports on elevated commodity prices, including oil and coal, besides a pick-up in non-gold non-oil imports on demand normalisation and capex pick up;
b) our in-house expectation is for oil to average $95-100 in 2022, increasing imports and widening the current account shortfall to -2.6% of GDP based on our sensitivity analysis (every 10% move widens CAD by 0.35% of GDP). Our risk case scenario of oil pushing above $120bl will leave the current account deficit at >3% of GDP;
c) On the financing end, tighter global liquidity, and tempering in earnings/valuation expectations in domestic equities is likely to moderate portfolio flows.
Add to this, there is also a lack of clarity on plans to pursue bond inclusion into global indices, which necessitates a reduction in flows assumption;
d) offshore loans might lose momentum on higher global borrowing costs, after frontloading issuances in FY22;
e) FDI flows were not materially impacted by the pandemic and are likely to surface as a key source of financing for the current account deficit, rising on manufacturing push and pick-up in private sector activity.

Key risk to our view comes from the uncertainty band around oil prices - further hardening in prices ($120-130bl) on worsening geopolitics (negative for BOP) or a sharp correction in oil and other import-intensive commodity groups on global growth concerns (positive for BOP).

Incremental liquidity addition to slow but surplus to remain in place

Amid the pandemic in 2020, the RBI balanced a dollar deluge (on strong flows and FDI), fending off appreciation pressures on the rupee (India: Pandemic puts policy on a balance beam). Persistent intervention (via dollar buying), besides open market operations, added to the already flush rupee liquidity surplus.

These dynamics are likely to change in FY23. With the US Federal Reserve not only signaling a higher quantum of hikes but also likely to be frontloaded, flows into emerging markets will be subdued. Domestically, lack of clarity on bond inclusion plans has tempered incremental passive foreign inflows into debt. At the same time, the current account deficit is expected to widen, pushing the balance of payments to a modest deficit. The BOP deficit and the likelihood that the central bank will intervene to keep rupee depreciation in check will have implications on domestic liquidity. 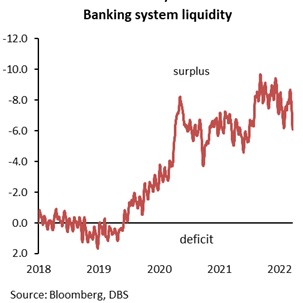 Considering the significant liquidity surplus this time around and the RBI only absorbing via multiple tenor variable reverse repo auctions (VRRRs), we don’t expect the BOP deficit to push liquidity to a deficit but slow the pace of incremental rise. This is also in sync with the central bank’s intention to keep liquidity flush (likely ~INR3-4trn) to avoid premature hardening in financial conditions, whilst allowing for natural drivers namely lower currency in circulation, balance of payment deficit, and higher domestic assets to correct the scale of surplus rather than direct liquidity absorption measures. This durable drain will defacto create headroom for the central bank to either conduct more open market operations or GSAP (~INR1.5-2trn) without adding to the already flush conditions. Surplus liquidity should also square with a rise in inflation concerns. Given the spectre of higher oil prices into the year, we revise up FY23 inflation to 5.4% yoy from 5% earlier.

Rupee resilience is partly about the RBI, a new equilibrium likely

We entered the year expecting the Reserve Bank of India to be active in defending the currency, after an extended period of fighting-off appreciation pressures. That inclination is likely to continue.

The rupee has endured a choppy ride yet far in 2022, after depreciating ~2%/US$ last year. Troubling geopolitics and resultant rally in oil prices drove the rupee lower to test below 77/$ this month but found its feet thereafter, courtesy of the central bank’s strong hand coupled with a pullback in oil prices.

Strong intervention efforts are reflected in an $11bn drop in foreign reserves this CY and down ~$20bn since hitting the record high in Sep21. In effect, reserves are being put to their intended use i.e., slow rupee volatility but not reverse its weakening trend. At current levels, the reserves stock is still well cushioned, ranking well on all adequacy metrics including short-term external debt (0.2x of reserves), total external debt, imports cover as well as on the IMF metrics. 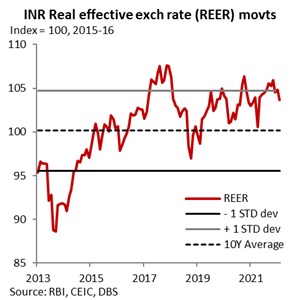 With the US dollar expected to benefit from a hawkish Federal Reserve and impending balance of payment deficit, the new equilibrium is likely to see the currency remain on a gradually depreciating path towards 77.0. This also chimes with the official leaning for a competitive currency. On an inflation-adjusted real effective exchange rate basis (REER), the INR has been strong vis-à-vis its trading partners in the past three years (barring risk-off pockets), hovering around the +1 standard deviation (SD) mark in recent months.

While the RBI maintains that it does not favour any level or direction for the rupee, containing volatility will be moot. Dollar sales to neutralize one-sided depreciation in the currency will also create the legroom for liquidity-neutral open market operations. After a fiscal year-end lull in Mar22, the need for bond purchases is likely to arise as worries over a bond supply/ demand mismatch in FY23 resurfaces, alongside pressure from elevated US bond yields increase the need to stabilize bond yields.