After mounting a spectacular recovery after one quarter of contraction last year, China has gone from strength to strength, making up for lost output. But has growth peaked already, with the remainder of the year likely to be characterised by policy-induced slowdown? Our Nowcast model appears to think so, with 3Q GDP growth estimated to ease to 7.6%, still somewhat helped by a favourable base effect. For the year as a whole, China remains on track to grow by around 10%, although we see tell-tale signs that the 2H21 growth will be lower than 1H21, not just on a year-on-year basis, but also sequentially.

The authorities have taken note of the strong momentum in the property markets, responding with some tightening measures. They have also removed some degree of implicit support from government-adjacent companies’ bonds, creating a ripple in the credit market. Additionally, capital markets have felt a chill from strong regulatory moves, especially in the tech sector.

Exports have been exceptionally strong, underscoring sustained global demand for goods made in China. Meeting such strong external demand has been helpful to industrial production and profits, a trend likely to last this year. Domestic demand however is a mixed story, with retail sales beginning to slow. Buoyant domestic travel and tourism have been an offset to a near-ban on visitor arrivals. 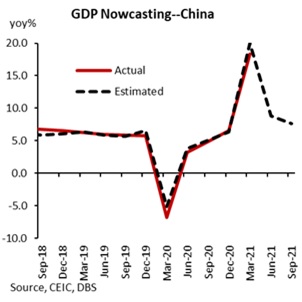 A torrid second wave held back India’s economic rebound in 2Q, and we see only modest improvement in 3Q, even though the worst of the pandemic appears to be behind us. Mass vaccination will take many months, with only 5% of the population fully inoculated so far. Reopening the economy will have to be rather gradual as fears of a third wave of the pandemic, driven by the delta plus variant, have spread lately.

A favourable base effect (the economy contracted by 24% during April-June 2020) will help produce a large positive growth number in 2Q, but our Nowcast model estimates those effects to fade somewhat in 3Q, with growth easing to 6.8%. The risk to the outlook is characterised by contrasting factors—on the plus side the export engine could hum owing to strong external demand; on the negative side, domestic consumption and investment could get postponed by mobility restrictions; high fuel prices can also be a potential drag.

Despite ample liquidity, exceptionally low interest rates, and public sector support, private sector credit growth remains well below trend. India entered the pandemic on a weak ground, with the economy slowing substantially through the course of the 2019. The resulting balance sheet stress continues to act as a drag to the economy, although attempts to revive manufacturing have caught the attention of global investors. Strong capital inflow and favourable external accounts have held India in good stead during this challenging year. Near-term economic prospects for India however have yet to brighten considerably. With no sign of respite from the pandemic, as infections and deaths hit record levels in early-July, Indonesia’s public health management struggles have spilled over into the third quarter. Construction has been severely hampered, credit growth remains weak, and near-zero tourism continues to be a major drag to economic activity. Favourable base effects will allow for 4.7% growth in 3Q, as per our Nowcast, but the underlying economic dynamic is substantially below-trend in Indonesia.

We see the economy likely to register no more than 4% growth this year, that too thanks to some tailwind to the commodity sector. At the same time, we see the risk to growth tilted to the downside, with hopes of opening the tourism/travel sector in a meaningful manner this year fading swiftly.

The longer it takes to vaccinate the masses, the deeper the risk of long-term scarring to economic potential. Indonesia averaged a healthy 5.3% real GDP growth during the past decade, which could be very difficult to replicate in this decade unless an exceptionally strong multi-year post-pandemic recovery is on the cards. We take some comfort from the fact that the authorities have not allowed their reform initiatives to be held back by the economic downturn, which would be essential to make up for the below-trend output of last year and this year. Taking the IMF’s GDP forecast for Indonesia going out to 2026, we estimate that even at that point the level of real GDP would be around 7% below trend. 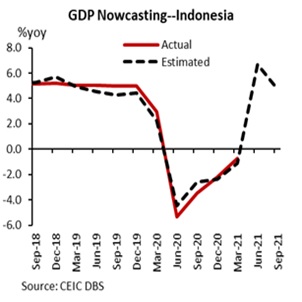 As it endeavors to reach the critical threshold two-thirds of the population being vaccinated, allowing for significant easing of mobility restrictions, Singapore’s economy remains caught between still-sound fundamentals and a not yet clear outlook. If variant-related transmissions remain under check, the coming months will be marked by a steady stream of easing measures, which ought to help consumer and business sentiments, pushing up retail sales, travel/tourism, events-related spending, loans, and investment. Already, low rates have galvanised the property market, and strong demand in China and the US has helped boost exports.

Our Nowcasting model is tracking 5.8% growth in 3Q, taking into account normalisation of base effects on trade and production figures. Travel would be up sharply relative to a year ago, but that’s not saying much as it would still be drastically below the long-run trend.

We see possible upside risks to the outlook in 4Q, subject to the major caveat of no slippage with pandemic management. Barring that unfortunate scenario, the economy could boom in 4Q around the type of re-opening dynamic playing out the in the US presently. Growth in that eventuality could exceed our annual forecast of 6.3%.