Concerns over liquidity have been broadening from Evergrande to other highly leveraged Chinese real estate developers of late. We did anticipate some reflexive spillovers from Evergrande’s rising risk in July (see DBS Focus: China: Quick thoughts on the sell-off in equities, 28 July 2021), but the losses in the China USD HY Index still sit uncomfortably, having now reached the extremes seen during 2020’s pandemic stress. Almost all of the index’s decline was due to developers, which as a group had seen their average bond yield soaring to a costly 15% (excluding Evergrande). 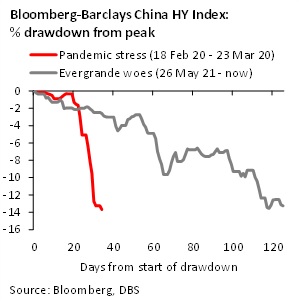 At the same time, it is worth mentioning that the broad China USD credit market has not been too adversely impacted. Our DBS Aggregate Credit Spread (or DACS) index for China has shown only a small bump of 4bps in September to 2.03%, far smaller than the 89bps surge in Feb-Mar 2020 at the start of the pandemic. 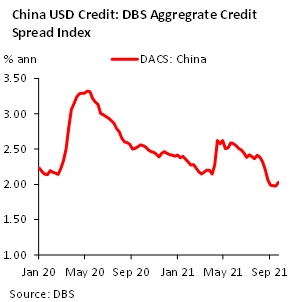 The IMF and BIS define systemic risk[1] as a risk of disruption to financial services that is (i) caused by an impairment of all or parts of the financial system and (ii) has the potential to have serious negative consequences for the real economy. Extending this definition more broadly, systemic risk is the risk that failure of an individual part could have a serious impact on an entire industry or economy.

It follows that for firms to pose systemic risk, two characteristics must jointly hold: (i) a large balance sheet size relative to the economy, and (ii) high interconnectedness with other economic actors. These characteristics combine to create serious consequences for creditors and counterparties in the event of failure. Lehman Brothers is well-known as the epitome of systemically important firms, with its collapse having led to global turmoil in financial markets back in 2008. 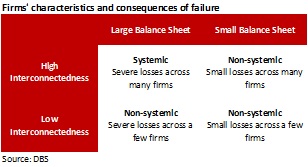 Measured by balance sheet size, Evergrande is quite large in China, holding total assets of over CNY2377bn (USD 367bn), or over 2.3% of China’s 2020 GDP. Its assets outweigh those of several city banks that are considered as likely domestic systemically important banks (or D-SIBs), including Bank of Jiangsu, Bank of Ningbo and Bank of Nanjing. Nevertheless, Evergrande’s size is smaller than almost all the global systemically important banks (or G-SIBs) identified by the BIS. It is also far smaller than Lehman in scale, which held USD680bn of assets (amounting to 4.6% of US 2008 GDP) when it failed. In short, Evergrande is not large enough to be a global systemic risk, but its size is still a concern locally for China.

The determining factor for us is that in terms of interconnectedness and impact, Evergrande is likely not systemic. Its connections are nowhere comparable to Lehman, which was deep linked to global financial counterparties in short-term funding markets, as well as bond, derivatives, and securitization markets. Risks are further magnified by complexity in its financial asset holdings, as well as notional positions that are multiples of reported assets. Lehman’s failure could and did cascade through its links to all financial market participants.

That is not to diminish the numerous economic links Evergrande have, especially with Chinese entities. This includes its extensive liabilities to homebuyers, suppliers, and local governments, with a portfolio of developments that sprawl over 280 cities in China. It directly employs around 200k people, and much more indirectly. Over 120 Chinese banks and non-bank institutions have extended credit to it or are holding its bonds. Yet beyond these headline figures, one must determine risk by their consequences: What is the likelihood of distress for its homebuyers, suppliers, or local governments? What is the likelihood of mass unemployment? What is the likelihood of a cascading failure to banks? In our view, the damage is likely to be highly circumscribed, mitigated by various factors.

Homebuyers will naturally enjoy the highest level of protection from policy makers. We expect forceful regulatory oversight and safeguards to ensure that money from pre-sales is allocated to suppliers and builders. Construction under progress will transition to other developers, if necessary. Local governments should also see support from the central government to ensure this is achieved if shortfalls exist. As for employment losses, the numbers are not indigestible considering that China had created 850k urban jobs per month on average in 2020.

Losses for Chinese banks are quite bearable. The proportion of bank loans for real estate development has stayed low at under 8% of total loans over the last ten years.  Furthermore, PBoC and CBIRC have already tightened regulations on real estate lending in December 2020, introducing caps on loans for real estate development and mortgages. While there is a transition period for compliance, these measures have already reined in real estate exposure for banks. The proportion of loans for development has fallen to just 6.6% in Q2 2021, which is the lowest since 2014. Given loan caps, ample collateral from Evergrande, and best practices against concentration risks, we expect Chinese banks to be able to comfortably provide for expected losses.

In summary, an Evergrande restructuring is painful, but systemic risk arising from its failure are contained given safeguards for banks and homebuyers. We anticipate final losses to fall mostly on unsecured creditors, and see small losses for some banks. The construction industry and households should stay mostly unscathed. 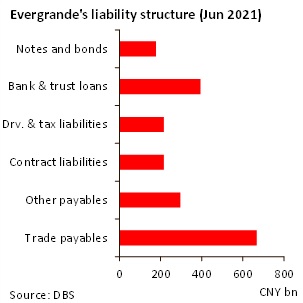 Market implications of an Evergrande failure

Any restructuring of Evergrande would inevitably invite scrutiny on all other Chinese high yield developers. Investors will begin by asking the question: how did Evergrande, a company which had never posted a loss since 2008, default on its debt all of a sudden? This is where parallels with Lehman are strongest—the investment bank recorded years and years of profits, right up to when it collapsed in 2008. 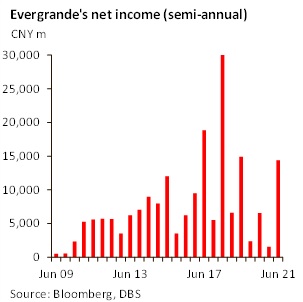 Such an outcome can either be an indicator of fraud, or more likely due to fragilities on the balance sheet.

The risk for Evergrande has always been its highly leveraged balance sheet, with a sky-high debt-to-asset ratio of 0.83. This gives little wiggle room in the event that assets are worth significantly less than what they were marked to be worth. Evergrande holds CNY1.4trn of inventories, which comprise 60% of its total assets. These inventories of property and land expose the company to not only liquidity risks, but also revaluation risks.

If Evergrande’s difficulties are idiosyncratic, then we could expect its inventory divestment to proceed relatively quickly, either through JVs or direct sales to other developers. However, Evergrande’s liquidity crunch has lasted almost three months, with the company falling short on asset sales required to stabilize confidence. Evergrande’s inventories may thus end up being cleared at prices far lower than their stated book value. This implies a disconnect between economic values and balance sheet values, turning a liquidity concern into a solvency concern.

What are the market implications? If Evergrande has to revalue its property holdings downwards, investors may conclude that other highly leveraged Chinese developers will face similar difficulties too in offloading their properties. Contagion could thus ensue, if a sustained period of weak Chinese property sales trigger similar liquidity stress for other highly leveraged developers. 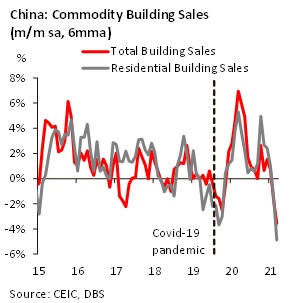 China’s residential building sales growth has sputtered since Q1 2021, with the last 6-month outturn being the weakest since 2014.  We see risks of a cycle of forced sales depressing property prices, which will further pile on pressure on developers to raise liquidity with even more sales. Even if Evergrande itself is not systemic, the situation faced by highly leveraged real estate developers may turn more challenging if property sales underwhelm further.

We see scope for an array of policy options to be deployed in order to short-circuit forced sales and smoothen the deleveraging process for leveraged developers.

First, the authorities can exert influence over large state-owned banks, encouraging them to defer interest and loan repayments for distressed developers. Moral suasion to accept partial payment or deferrals may also be applied on domestic financial institutions holding onshore bonds.

Second, direct liquidity assistance can be provided by state-owned enterprises to distressed developers, in exchange for stakes in their developments or subsidiaries.

Third, restrictions on property purchases could be relaxed for non-tier 1 cities. To be sure, we are not advocating a reversal from the current policy goal of discouraging speculative property investment. But a case for policy recalibration can be made now given weakening sentiment and softening prices. Chinese sales data for August showed that residential property selling prices on a per square m basis have already fallen by 3.1% and 3.5% (y/y) in Central and Western China respectively. Anecdotal data for September has also painted a weak picture. 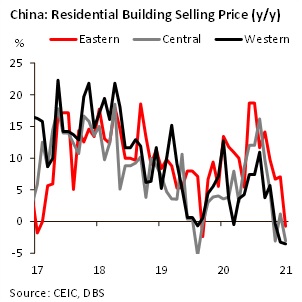 Fourth, the PBoC could step up liquidity injections to the banking system as a precautionary measure to guard against any unexpected tightening of liquidity.

A co-ordination of these policy measures will be helpful to provide breathing room for developers in tight liquidity situations, as well as enable them to fully maximise value in asset sales. These in turn will buttress credit market confidence, reduce risks of further contagion amongst HY developer credit, and give sufficient runway for the property sector and the economy to avert a ‘hard’ landing.