India: Inflation becomes a priority at the RBI

In a unanimous decision, India’s Monetary Policy Committee (MPC) left the key benchmark rate unchanged at 4.0% as well as maintained an accommodative stance.

Action lay elsewhere as firstly, the policy guidance was tweaked to focus on “withdrawal of accommodation to ensure that inflation remains within the target going forward, while supporting growth” which essentially takes inflation back to the centre of the policy dashboard.

Secondly, the width of the Liquidity Adjustment Facility (LAF) corridor, around the repo rate, was restored to pre-pandemic levels of 50bp, bookended by the newly instituted Standing deposit facility (SDF) rate at 3.75% and the Marginal standing facility (MSF) was retained at 4.25%. The SDF rate is tantamount to an indirect tightening of 40bp, as the fixed reverse repo rate stays at 3.35%. To recall, the 2014 Urjit Patel committee discussed the SDF as an instrument that helped define a floor rate in the inter-bank market, especially in liquidity surplus conditions, as is the case presently. In essence, this allows for the absorption of liquidity from the system without the binding constraint of providing collateral in exchange. The use of SDF will be on the discretion of the banks, in contrast to other instruments like the cash reserve ratio, reverse repo etc which are at the discretion of the central bank.

Inflation concerns returned to the centre stage even as the durability of recovery remains a worry. This trade-off was underscored by a 60bps cut in the growth projection and a 120bps increase in the inflation forecast, backed by a sharp US$25pb increase in the underlying crude oil price assumption.

Departing from previously held expectations for inflation to moderate, the FY23 CPI forecast was revised up to 5.7% vs 4.5% owing to a) notwithstanding hopes for a normal monsoon, food commodities have risen through wheat, edible oil, feedstocks, etc due to geopolitics and supply shocks; b) direct and indirect impact of elevated crude - average crude oil price (Indian basket) assumption was revised up to $100pb vs $75pb before. Policymakers also added that the inflation trend was fraught with risks and largely contingent on commodity price movements.

On growth, the RBI derived comfort from a swift improvement in the Covid caseload, which allowed for contact intensive activities to gain traction, better confidence, and business surveys, pick up in capacity utilisation surveys and rebound in multiple high-frequency indicators. Geopolitics had, however, cast a shadow through confidence and commodity channels. To reflect this local-global mix, the FY23 GDP growth forecast was cut to 7.2% from 7.8% before.

The Monetary Policy Report was also concurrently released with underlying assumptions we highlight below: 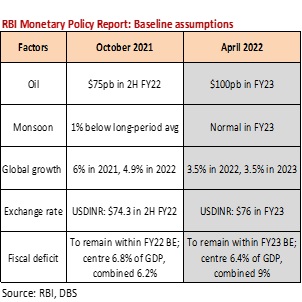 The RBI maintained that the policy response in light of ‘tectonic shifts’ was to be ‘pre-emptive and re-calibrated dynamically’ as well as adopt a ‘nuanced and nimble-footed approach to liquidity management’. Key takeaways were:
- The interest rate for around 80% of the total liquidity absorbed under the LAF during Jan-Mar22 had firmed up close to the policy repo rate due to the rebalancing of liquidity through the variable rate reverse repo (VRRR) auctions, which continues to lower the relevance of the fixed reverse repo rate
- The SDF is introduced as the floor of the LAF corridor, providing symmetry to the operating framework of monetary policy.
- Providing forward-looking guidance, the RBI also added that it “will engage in a gradual and calibrated withdrawal of this liquidity over a multi-year time frame in a non-disruptive manner beginning this year”. This suggests that liquidity conditions will be kept in surplus and not return to a neutral balance in a hurry, which was maintained under previous Governors, despite inflation concerns

The central bank MPC’s policy guidance marked a shift from their long-standing strong dovish disposition, taking inflation back to the centre of their policy dashboard.

The tweak in the guidance to acknowledge the need to start withdrawal of accommodation leaves the June rate review live for a change in the stance to neutral. With upside risks to the 2QFY23 inflation projection, the first repo rate hike might be delivered in August and thereafter towards end-2022. We retain our expectations for 75bps worth rate hikes in FY23, concentrated in second half of the year. Local considerations will still trump global policy normalisation i.e., even in the face of the US Fed pursuing an aggressive rate hiking cycle, it is amply clear that the RBI is unlikely to respond with a larger or faster quantum of hikes.

The hawkish surprise from the central bank led 10Y INR (generic) bond yield to test past 7% to three-year high along with an uptick in 2Y and money market rates. Besides the extension and increase in the held-to-maturity requirement for banks that will potentially draw additional demand for bonds, markets still await clear signals on the shape and form of the central bank’s support. For banks, the present limit for Held to Maturity (HTM) category for FY23 will be raised to 23% (vs 22% earlier) of NDTL until March 31, 2023. Add to this, banks will be allowed to include eligible SLR securities acquired between April 1, 2022 and March 31, 2023 under this enhanced limit. Thereafter the HTM limit will return to 19.5% in a phased manner starting from June 30, 2023.

CPI inflation in March, out on Monday, is on course to breach the central bank’s target range, defying expectations of a let-up on base effects. We expect March inflation to rise 6.3% yoy, quickening from 6.1% the month before. The moderating impact of base effects is likely to be offset by a sequential rise in the food segment alongside the trickle-down impact of higher energy commodity prices as pump prices and LPG have been raised incrementally since late March. Yet, the full impact of the pump fuel and LPG price increases alongside higher natural gas are likely to be reflected from April onwards.

There are additional pipeline risks. First, diesel and petrol prices are up 11.5% and 10.5% respectively in early April vs Dec21 (fuel types have a combined weight of 2.3% in the CPI basket), doubling of natural gas, 5.5% increase in domestic LPG, commercial LPG adjusted up so has CNG, price increases for bulk buyers of fuel. Second, the pass-through of higher input costs (logistics and raw material costs) faced by manufacturers, for instance, the FMCG sector, and service providers besides imported pressures from a rally in the broader commodity universe.

Third, other segments like fertilisers, utilities, edible oils, wheat, etc., will also exert upside pressure. Cost-push forces account for much of the inflationary push for now, while demand is gradually on the mend. But there are clear signs that inflation is increasingly becoming more persistent and generalised, necessitating an appropriate policy response. CPI is likely to stay elevated at around 6% in April-May, assuming retail fuel increases by another INR5-7bl, likewise in June-July, with monsoon strength as the other catalyst. We lift the FY23 average to 5.9% yoy with upside risks, vs our previous forecast at 5.4%.

We update our proprietary Financial Conditions Index (FCI) with the latest market prices spanning FX, credit, equity, and bond markets. The aggregate index shown in the chart below suggests that financial conditions are accommodative and conducive to recovery. We will be watchful for any spillover from policy normalisation by global central banks. See Mapping India’s Financial Conditions Index (FCI) for details on the study.