Recession fears have been rising as sustained monetary policy tightening is priced in by the markets.
Taimur Baig, Radhika Rao11 Apr 2022

The widely followed 2yr-10yr segment of the US treasury yield curve has inverted on several occasions this month, giving rise of speculation that a recession is in the 12-18 month horizon. Why is a curve inversion meaningful? It’s because short-rates being higher than long-term rates creates a self-fulfilling dynamic of discouraging short-duration borrowing and investment; it’s also because it reflects nervousness among market participants about the near-term outlook, which would entail policy easing down the road. 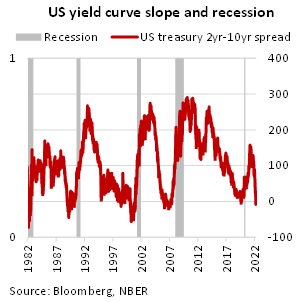 What could the US economy to tip into recession? We think two worrisome avenues are ahead. First, higher interest rates could cause a sharp correction in financial markets, the ensuing negative wealth effect then could drag down consumption and investment. Why do stocks sell off when rates go up? It’s because the excess yield (equity yield minus treasury returns) offered goes down (it has already declined by 160bps in the past year).

Second is the impact of higher rates on housing. Housing makes up 15-18% of US GDP, and it is rather sensitive to interest rates. as much of real estate transactions are financed by mortgages and home renovations tend to be financed by home equity loans. With fixed mortgage rates up by 275bps this year, the impact on debt-service is bound to be substantial and discouraging.

But an outright recession is unlikely, in our view. We expect growth to slow to 3% this year and further down to 2% next year, as we think there is enough economic momentum and good balance sheet health in place to prevent a recession for materialising. In addition to the 2yr-10yr slope, the 3-month-10yr slope provides valuable information on forthcoming recessions also, and there is little of concern in that segment. Of the two risks discussed here, we would worry about the first one (asset price crash) as a possible driver of a mild recession in 2023 or beyond. 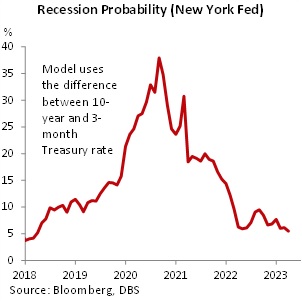