Photo credit: AFP Photo
Asia rates and bonds continue to sell off, underpinned by both global drivers and domestic macro and policy shifts. On the external front, Fed speak has been increasingly hawkish and reflects a desire to tighten policy aggressively to tame US inflation. Within Asia, inflation prints are climbing and, in several economies, are now some distance above central bank target and forecast levels. Asia central banks, previously dovish for growth reasons, are now turning more hawkish to focus on domestic inflation risks and financial stability risks around a faster-moving Fed.

Against such rates-negative dynamics amid a generally weak risk environment, we expect the strong upward momentum in Asia rates and bond yields to persist for one to two quarters. It could be 4Q before we see some stabilization, pending possible favourable shifts, such as lower oil prices or a change in Fed stance. 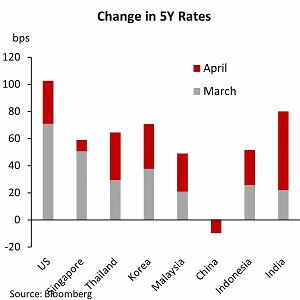 For the next one to two quarters, we expect the trajectory of US rates and changes in US curve to continue to be the dominant factors in influencing how Asia rates trade. Based on our statistical analysis, year to date, Asia rates have been largely driven by US rates and global factors, with idiosyncratic domestic factors not mattering much. At present, US rates and curve dynamics are expected to remain quite bearish in terms of impact on Asia rates.  While the sell-off in US rates over the last three to six months has been primarily led by the US front-end (2Y), in recent days, we are seeing the long-end (10Y, 30Y) sell off in tandem. Clearly, rates markets are reacting to the prospects of impending Fed balance sheet roll-off/sales, and pricing for greater US term premium. At this point, peak Fed hawkishness does not seem imminent, which could keep US rates buoyant. Accordingly, external pressures on Asia rates, may not abate for some time.

US real rates is something we track and compare against Asia real rates as a gauge of relative policy stances. A notable development has been in 10Y US real yields which have risen significantly to -6bps, from around -80bps at end-February and -50bps at end-March. The immediate implications for Asia macro are that Asia's real rate buffers vs US, which were earlier perceived as a key support for our relatively more dovish monetary stances, are now diminishing fast. As a result, there could be greater external pressures ahead for Asia central banks to turn incrementally more hawkish.

Taking a more regional view, several Asia central banks would much prefer to stay accommodative to focus on supporting growth, as output gaps are still negative and full recoveries vs pre-pandemic have not been achieved. However, rising and above-target inflation prints across much of the region, are sharply reducing the room/flexibility for Asia central banks to do so. To be sure, Asia inflation prints were already on a strong uptrend prior to the Russia-Ukraine conflict and accompanying rally in energy and broad commodity prices. With commodity prices now sustaining at much higher ranges because of geopolitics-driven supply shocks, the risk outlook ahead around Asia inflation should be seen as firmly skewed to the upside.

From a pricing perspective, while Asia rates have repriced higher, we think that current levels may not yet be factoring in a sufficient amount of inflation risk premium. Our judgement is based on inflation surprise gauges that we construct to track the extent of upside/downside surprise of actual CPI prints vs forecasters' survey.

For India, February and March prints came in much higher than expected, bringing our gauge sharply higher. For China, inflation has surprised to the downside for most of post-pandemic period, but no longer so in 2022. 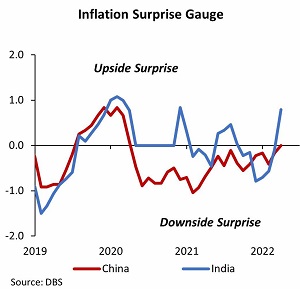 Notes: We compute 6-months moving-averages of the difference between actual CPI print and survey, scaled by the standard deviation of forecasters’ estimates.

For North Asia, forecasters have persistently underestimated inflation since early 2021, and the extent of underestimation has gotten increasingly large. For ASEAN, inflation surprised to the downside for much of 2H of 2021, but the gap with forecasters' survey has closed recently. 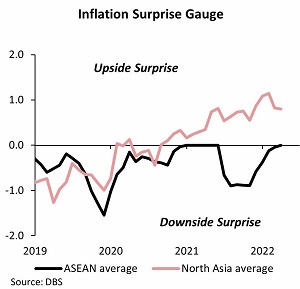 Seeing that all our inflation surprise gauges are rising (i.e. inflation surprising to the upside), we think that Asia inflation risks are not fully priced in yet and see more scope for Asia rates to reprice higher. In the coming months, if we see a catch-up by forecasters or actual CPI prints surprise to the downside, that could signal a turning point for some easing of domestic pressures on Asia rates.

An immediate market implications of high Asia inflation (relative to forecast and central bank targets) is that it creates a lot of uncertainty around peak and terminal policy rates. The longer that inflation surprises to the upside or stays above central bank targets, the greater the prospects that Asia central banks could have to hike more for this cycle, perhaps even beyond pre-pandemic level of rates. Therefore, even though Asia OIS/IRS swaps are already pricing in tightening, we do not think sufficient uncertainty premium around peak/terminal policy rates is being reflected. While we don't think Asia inflation expectations and by extension, rate expectations would become unanchored, markets will have to price for a large amount of risk premium in the near-term.

Strategy for 2Q
Our 2Q strategy for Asia rates is to avoid receive swaps or long bond ideas and focus on selective pay or curve-flattening ideas. The upward momentum in global rates is expected to persist and it is probably too early to receive swaps to try position for overshooting or an eventual peak in global rates - To consider receiving, we would need to see some signs of US/global inflation moderating or surprising to the downside relative to survey/consensus. For Asia bonds, the broader risks environment remains unconducive for total returns due to worries around Fed tightening, geopolitics and China's growth. These worries are being manifested in large FPI equity and bond outflows (out of Asia) in March and April.

Even though Asia rates have already sold off significantly, we think that there is still scope for repricing and the risks are skewed towards higher Asia rates in 2Q. Therefore, we prefer pay Asia swap ideas, bearing in mind the negative carry costs of holding a payer. Asia curve-flatteners could also do well. The current Asia macro trend of upward revisions to inflation forecast and downward revisions to growth forecast should support curve-flattening pressures. Broadly speaking, Asia central banks have also been slower than global peers in pivoting hawkish, suggesting that Asia curves are currently relatively steep and hence, have more flattening potential ahead as Asia central banks turn incrementally hawkish and catch up to global peers.

Changes to our Ideas

With our broad 2Q strategy in mind, we make several adjustments to our portfolio of Asia rates ideas. We exit open ideas involving receivers and curve-steepeners, namely long 30Y CGB, long 5Y IndoGB and receive 1Y1Y vs pay 5Y INR NDOIS ideas. Specifically on CNY rates, the prospects of rate cuts to 7D reverse repo or MLF appear to be waning and hence, room for CGB yields to fall is likely limited. If incremental support for the Chinese economy is provided via fiscal and credit easing, rather than monetary, long-duration CGB yields could face upward pressures. Considering the risk-reward, we exit our long-standing 30Y CGB idea.

We add the following ideas to position for greater inflation risk premium within Asia rates and more hawkish repricing of expectations around Asia monetary policy in 2Q. 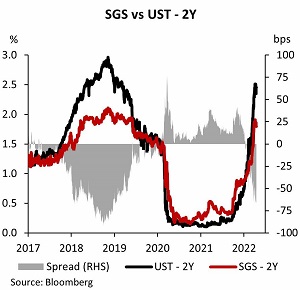