Trade implications of an undervalued JPY

The JPY’s sharp under-valuation should narrow over time as it induces an improvement in trade.
Group Research, Chang Wei Liang04 May 2022

USD/JPY has climbed above 130 last week, after the BoJ reaffirmed its Yield Curve Control target of 0% for the 10Y JGB. We consider implications of current JPY depreciation for its DEER valuation, and the impact on Japanese trade.

For context, the JPY has been weakening against the USD over the last three months, amid expectations of policy divergence (see DBS Flash: The Yen’s impact on the DEER strategy, 30 Mar 2022). The loss last week brings the decline to an extreme, with the JPY/USD 3M return coming to -13%—a return rarely seen across the distribution of historical returns since 2000. Our DEER strategy, which seeks exposure to undervalued currencies, has a long position in the JPY, and recent moves imply that the JPY’s undervaluation is even starker today. 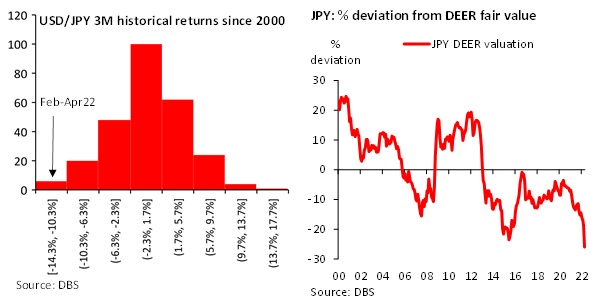 From the perspective of our DEER fair value, the JPY clearly stands at its cheapest since analysis started in 2000. Historically, when the JPY traded at such low valuations, such as in 2015, it has managed to strengthen and revert to more neutral levels. There is reason to expect JPY recovery to recur going forward, with mean reversion driven by the changes in trade activity arising from such exchange rate misalignments. Fundamentally, while currencies can fluctuate widely, they cannot deviate too far against fair values. Any extended deviations will result in wider and wider trade imbalances, which are unsustainable in the long run.

During the JPY’s recent selloff, there has been frequent commentary that a weak JPY policy is perhaps misguided, or even economically detrimental.  The reason given is that Japanese companies have been outsourcing production in recent years, and will benefit less from a weak JPY. Such speculation provides an impetus to examine the relationship between the JPY and Japanese exports/imports volumes over the years. Could we still expect a traditional trade boost from the weaker JPY for misalignments to close?

Establishing the link between FX and trade

To lay the ground for our own analysis, we first provide an overview of international trade theory and existing literature on trade and currencies.

Whether a currency devaluation improves the trade balance depends on the well-known Marshall-Lerner condition, namely that the sum of absolute import and export price elasticities are greater than one. Modern estimation of export and import price elasticities follow the reduced-form model proposed by Houthakker and Magee (1969), with real exports linked to relative export prices and trading partners’ GNP, while real imports are linked to relative import prices and domestic GNP. With purchasing power parity, the relative price ratios also represent the long run exchange rates. It is thus common to replace relative prices with real exchange rates in estimation. For instance, Bahami-Oskoee and Brooks (1999) found the elasticities of US bilateral trade with six trading partners using bilateral real exchange rates, based on a cointegrating relationship of the following form:

Despite its theoretical importance, Bahmani, Harvey and Hegerty (2013) assess that there is no strong empirical evidence supporting the Marshall-Lerner condition. They believe that the cointegrating relationships between exports/imports and other economic variables could have been mis-specified, resulting in inaccurate estimates across the literature. Indeed, trade relationships had become ever more complex since the 1990s due to the rise of global value chains. Given a greater proportion of intermediate goods imports for processing into final exports, traditional trade equations may be missing these features.

Focussing on growth and J-curve dynamics

To circumvent this problem and minimize the risk of spurious regressions, we propose modelling export and import growth rather than levels, as is traditionally done. There are two reasons why such analysis is more amenable. First, unlike modelling of exchange rate levels, information on the levels of exports and imports is not as important as compared to growth rates, and they can be dropped with little loss of meaning. Second, J-curve dynamics, where a trade balance initially deteriorate upon a devaluation before improving beyond its starting level, are implied in a straightforward way if we find persistent changes in export and import volume growth arising from currency misalignments. This is because net export volumes will always improve if export volume growth rise and import volume growth fall, while any currency shifts away from fair value (and nominal price changes) are one-off.

As currency misalignments can take a period of time to fully influence export and import volume due to contractual rigidities, we estimate the impact of DEER misalignments on export (or import) growth to be the sum of four  coefficients, for the current quarter and the past three quarters.

Our analysis found that when the JPY is undervalued by 10% on average over the last 4 quarters, then Japan’s export volume growth is boosted by 0.1% q/q (0.4% annualised), and import volume growth is compressed by 0.3% q/q (1.1% annualised.). The overall impact on net export volume growth is seemingly small, but the economic impact could be meaningful given the large proportion of trade relative to GDP, and low long-term growth rate of Japan. With the JPY now around 25% lower than its fair value, we estimate that the net exports’ boost to growth can reach a sizeable 0.7% per annum.

Recent data after the 08/09 GFC also suggest that Japan’s export sensitivity to currency misalignments has grown, while the impact on import growth is little changed. Misgivings about the efficacy of a weak JPY are thus misplaced. Our analysis of the data found no reason to challenge the BoJ’s view that a weak JPY is generally positive for the economy, at least from the trade perspective. That said, policy may have broader considerations beyond trade competitiveness, and exchange rate uncertainty and volatility itself may well pose an economic drag that demands policy attention.

Trade sensitivities to DEER for other countries

With just 80 quarterly observations, it is not possible to show that our estimated export volume and import volume growth sensitivities are statistically significant. Still, the central estimates support the case of an undervalued JPY spurring net exports growth, which is not unexpected with Japan being an export and manufacturing-oriented economy. Could other economies also see a similar trade impact from currency misalignments indicated by the DEER?

To affirm that the trade impact of our DEER misalignments is realized in general and not just for Japan, we extend our trade sensitivity analysis to the US, China, Euro Area, and the UK, using the same model specification. Individual country regressions across the 2001-2021 period showed that the coefficients were as expected for all 5 major economies, except the UK. Nevertheless, the larger sensitivity of export growth relative to import growth suggests that any GBP undervaluation will still boost net exports.  We table the country sensitivity estimates below: 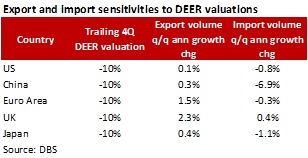 In conclusion, we have shown that the JPY’s current sharp undervaluation will have a trade and economic impact over time. This implies that its misalignment from our DEER fair values is not sustainable, and some strengthening is expected over time. We have also shown this to be the case in general for other major economies. A consistent strategy through extreme periods of valuations overshoot or undershoot should eventually pay off.