Decision: Bank Indonesia left the key benchmark rate unchanged at 3.5% on May 24, matching consensus and our forecast, and defying expectations of a small minority backing a hike. Instead, the authorities resorted to the well-telegraphed increase in the reserve requirement ratio (RRR), which stands to rise to 6% in Jun22, 7.5% in Jul and 9% in Sep for conventional lenders, faster than the pace announced in Jan22 (RRR was to rise to 6.5% by Sep22), to absorb liquidity in a non-disruptive fashion. The reserve ratio hike will potentially withdraw IDR110trn ($7.5bn) of liquidity from the banking system, in addition to IDR200trn in the first round of the RRR hike. Banks will be provided with part relief on the scale of RRR increase upon fulfilling preset lending requirements to priority sectors.

Economic assessment: Key economic assumptions were held unchanged including growth at 4.5-5.3% for the year, and current account deficit at -0.5-1.3% of GDP. 2022 inflation is seen at slightly higher than 4% but expected to return to the 2-4% range by 2023. BI plans to coordinate measures with the government to manage inflation, noting the favorable impact of a higher subsidy budget on inflation. Commentary struck a cautious note on global growth, inflation, financial conditions, and spillover risks by way of slowing flows to EM countries. BI expects US Fed to hike by 250bp in 2022 and 50bp in 2023. This was accompanied by expectations of resilience in domestic recovery, loan pick-up (Apr’s 9.1%yoy, fastest since mid-2019) and limited rupiah depreciation compared to regional currencies. 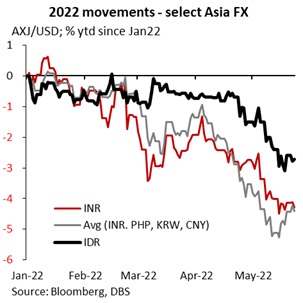 Outlook: The central bank’s monthly survey points to May inflation remaining elevated at 3.53% yoy (+0.38% mom) vs Apr’s 3.5%, driven by higher air fares, food (vegetables, protein sources including egg and meat) and pass through of non-subsidized fuel costs. While this is likely to underpin the inflation trend, the government’s recent decision to increase the subsidy budget (details below) and by extension, contain energy costs, partly dampens pipeline risks to the price trajectory. Add to this was the decision to lift the ban on palm oil, capping cooking oil prices.

Concurrently, rupiah depreciation has been less than regional peers, which lowered the urgency for Bank Indonesia to normalise policy, despite hawkish overtures by counterparts i.e., Malaysia and Philippines in recent sessions. Notably, inflation was high in the latter two countries, breaching the target in Philippines in the latest reading. Signs of an imminent shift towards hikes was largely absent, premised on expectations that inflationary risks might briefly rise but return to trend thereafter and market conditions were not disruptive to the currency’s direction.

BI meets next in the third week of June, ahead of which the US Fed would have delivered its second consecutive 50bp hike, totaling +100bp in 2Q22. The domestic price trend is also likely to stay exposed to the vagaries of imported price pressures, price distortions in food commodities and pass through of higher input costs by producers, besides demand restoration. With inflation likely to stay sticky in the higher end of the BI target range, soft rupiah, and favourable growth dynamics, we expect a gradual shift towards hikes to begin in 3Q22 to preserve the attractiveness of local bonds and currency in the face of a hawkish US Fed hike cycle.

Dousing expectations of price hikes in fuel subsidies, the Finance Ministry raised allocation towards subsidies last week. This underscores wariness over piling additional pressure on consumers’ purchasing power and to cap inflationary concerns. Total expenditure for 2022 was revised up to an estimated IDR 3106trn, up IDR 392bn from the earlier projection. This increase factors in a 56% jump in energy subsidies to IDR 208.9trn i.e., 0.4% of GDP jump. Add to this, compensation to state-owned oil company PT Pertamina and state utility PT Perusahaan Listrik Negara will also surge to IDR 293.5trn. Plans to raise power tariffs for consumers who use 3,000V and higher is under consideration.

Detrimental impact on the fiscal math is partly negated by a projected 2.3% of GDP boost from revenues from natural resources. State revenue assumption has, accordingly, been revised up to IDR 2226trn vs IDR 1846trn estimated earlier. Other changes in budgeted numbers include a) oil price adjusted to $95-$105/bl vs $63/bl before; b) yield of the benchmark 10Y seen higher at 6.85%-8.42% this year and USDIDR at 14,300-14,700.

Netting off the two, 2022 fiscal deficit is expected to widen to -4.5% of GDP vs -4.0% indicative and -4.9% budgeted target. Deferment in the decision to lower subsidies and hence, retaining administered prices will delay projected consolidation towards -3.0% of GDP deficit limit in 2023. Capped domestic fuel prices provide more headroom to Bank Indonesia to keep rates unchanged in the near-term, yet the currency is likely to stay under pressure from widening ID-US rate differentials and a bid greenback.

The Indonesian government revoked the ban on palm oil exports, which has been place since April 28, replacing that with domestic sales quota for cooking oil. This is intended to backstop local supplies and cap prices, after local farmers protested the measure on rising surplus stocks. Indonesia accounts for over 60% of global production.

Domestically, a third of the output is consumed by way of the food sector, biodiesel etc., whilst the rest are exported. With the sector being amongst the best export earners for the economy, distortions in the trade policy might affect this year’s trade surplus buffer. 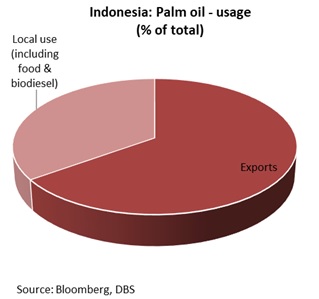 Hinging on commodities, current account to register a small surplus this year

1Q22 current account (CA) registered a small surplus of $0.2mn (0.07% of GDP) vs $1.5bn (0.5%) in 4Q21. While the goods trade surplus was steady at $11.1bn vs 2021 quarterly average of $10.9bn, an increase in services account deficit on account of outbound travel, including religious/ pilgrimage travel as well as lower remittances contributed to the smaller CA surplus. On the other end, even as direct investment flows held up, portfolio outflows continued for a second consecutive quarter, albeit slowing from 4Q21. 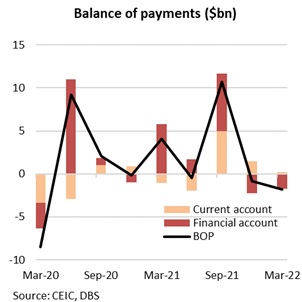 Mar22 balance of payments deficit widened to -$1.8bn, more than doubling from quarter before.  Q2 math is likely to witness a softer financial account, whilst commodity-led export gains support the goods trade balance. The temporary palm oil export ban is likely to hurt May’s trade balance, with its cessation to bode well for June. In all, we still hold out for a small CA surplus this year, of around 0.4% of GDP. Risks to this view stem from a potential pullback in commodity prices and/ moves to curb shipments of key commodity segments to keep local prices in check.