CNY to consolidate after year-long gains 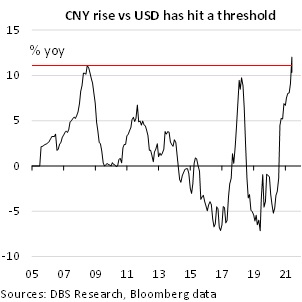 Year-long CNY rally may have run its course

CNY appreciated to a three-year high of 6.3685 per USD on 28 May. At this level, the CNY has strengthened 12.5% from its worst level of the Covid-19 outbreak in May 2020. With the CNY posting its strongest year-on-year gains since its de-peg in 2005, authorities have moved to discourage one-way appreciation bets in the currency. The most significant measure was probably the central bank’s decision on 31 May to increase the reserve requirement ratio (RRR) for foreign exchange deposits at financial institution to 7% from 5% effective 15 June.

Although the above measures helped to cap the CNY, it was the resurgent USD that weakened the CNY above 6.40 per USD this week. The themes that fuelled the one-way CNY appreciation bets have likely run their course.

Theme 1: CNY will be boosted by China’s strong growth prospects (not quite)

CNY bulls have overplayed China’s strong GDP growth rebound of 18.3 yoy in 1Q21. Exceeding the 2021 official growth target of 6% by a wide margin also reignited earlier predictions made last December for China to overtake the US economy by 2028. Such comparison would heighten the US’s view of China as a strategic competitor and prove counterproductive to efforts by the world’s two largest economies to find middle ground.

Looking past the low base effects from 1Q20, GDP expanded only 0.6% over its previous quarter. This was not lost on investors in Chinese equities. The Shanghai Composite index has, as of 2 June, risen only 3.6% ytd, well below the 12.1% rally in the S&P500. Looking ahead, our Hong Kong colleagues expect China’s growth to slow to 10.5% yoy in 2Q21 and stabilize around 6-7% in 2H21. China’s recovery from the pandemic remains shaky. Only some 70% of China’s registered market entities are operating. This is important because the private sector accounted for more than 60% of GDP and hired over 80% of the labour force. Against such a backdrop, the government sees a challenge to create 11 million urban jobs and to lower the unemployment rate to 5.5%.

Theme 2: A stronger CNY will curb inflation (rejected by regulators)

The PBOC issued a statement on 27 May that the CNY cannot be a tool to offset the impact of surging commodities. Earlier on 24 May, the National Development and Reform Commission (NDRC) warned of "zero tolerance” toward “malicious speculation” that drove up commodity prices to record highs. To this end, regulators will tighten supervision of the commodity futures and spot market to discourage price collusion, the spread of false information, hoarding and other illegal activities. CPI inflation has risen to 0.9% yoy in April from -0.3% in January. Our economists believe that inflation could average higher at 3.5% and 4.5% in 3Q and 4Q respectively. Even so, full-year inflation is expected to come in at 2.5% or below the official target of 3% for 2021.

Theme 3: CNY will replace the USD as the dominant currency (will take time)

In April, PBOC deputy governor Li Bo stated that the promotion of the Digital CNY (e-yuan) and efforts to internationalize the CNY were not targeted at toppling the USD or any other international currency. More importantly, deputy governor Li confirmed that there was no timeline for a nationwide rollout of the pilot e-yuan project which is still in its testing phase. According to a Business Times article in May, China is facing a challenge to get more consumers and merchants to accept and adopt the e-yuan in a market dominated by Alipay and WePay. Former PBOC governor Zhou Xiaochuan recently called the threat of the e-yuan to the USD’s dominance as misguided speculation.

CNY has scope to consolidate between 6.40 and 6.60 for the rest of the year as focus shifts from the recovery to US-China relations. Although both countries have decided to maintain relations, the rift between Beijing and new Biden administration has remained wide. Finding a middle ground remains challenging given the red lines drawn across issues from trade practices, technology, defense, national interests, sovereignty and human rights.

President Joe Biden’s policy to “confront, compete, and cooperate” with China has drawn in allies. In May, the EU Parliament suspended the ratification of the its Comprehensive Agreement in Investment with China while Beijing suspended indefinitely its strategic economic dialogue with Australia. It is therefore hard to expect a more assertive China to allow more CNY appreciation to correct the large bilateral US-China trade deficit. China’s regulators have also refuted arguments for a stronger CNY to curb inflation and halted one-way appreciation bets in the CNY.