Macro Insights Weekly: How much bond can central banks buy?

Central banks have routinely bought and sold securities as part of their market operations, but the present scale of their involvement is unprecedented.
Taimur Baig, Samuel Tse28 Jun 2021

Central banks have routinely bought and sold securities as part of their market operations, but the present scale of their involvement is unprecedented. Since the global financial crisis zero rates have become ubiquitous in the US and Europe; expanding balance sheet through asset purchases to support the economy has become widespread. The US Federal Reserve has been the most influential in global markets, with its holding of treasuries, as a share of total outstanding, up from less than 14% at end-2019 to close to 24% presently, an extraordinary jump. These measures have helped stabilise markets, avoided a liquidity crunch, backstopped sentiments, and countered deflationary risks. 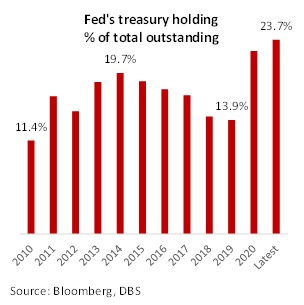 What are the downsides going forward? Central banks’ balance sheets, bloated with government securities, run the risk of substantial capital losses if interest rates begin to rise.  Market signals about bond pricing is distorted owing to the oversized role played by monetary authorities. Central banks can also become paralysed from acting owing to the fear of market and political repercussions if they were to sell the bonds. The exit or end-game looks rather tenuous.

The jump in central bank holding of government securities has spread to other developed markets and emerging economies as well. Since 2015, Bank of Japan’s holding for JGBs has gone from 13% to 45%, perhaps not surprising given the rollout of its Quantitative and Qualitative Monetary Easing programme, but there are many others with striking accumulations as well. From Indonesia and Philippines to Australia and the UK, central banks have pushed up their holding of government securities by several times. Singapore, South Korea, and Thailand make up the exceptions. 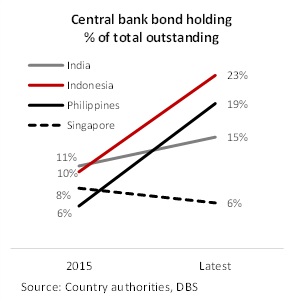 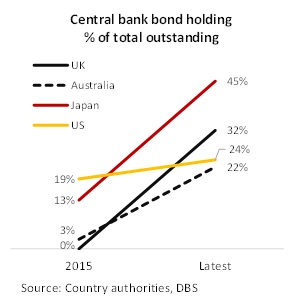