We revise up US growth and inflation forecasts and incorporate Fed’s shifting tone in our fixed income strategy for the rest of the year.
Taimur Baig, Eugene Leow30 Jun 2021

Fueled by strong fiscal and monetary stimulus and rapid vaccination, the US economy is on course to mark a vigorous rebound from last year’s pandemic induced contraction. Consumer and business confidence are up, as are manufacturing and sales. Jobs are a plenty, wages are picking up, housing market is at record highs, and additional fiscal support in the form of various infrastructure and social spending programmes is in the pipeline. Having stumbled with pandemic management last year, the US is leading industrial economies out of the temporary but deep slump of 2020.

The most closely followed aspect of the rebound is the labour market. As per recent data, notable job gains have occurred in leisure and hospitality, in public and private education, and in health care and social assistance, with the unemployment rate down to 5.8% and wages growing at a healthy clip. 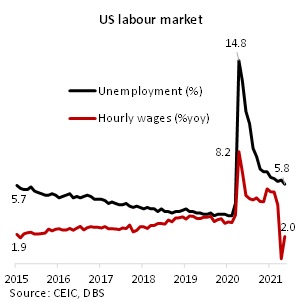 Still, there are over 9 million jobless people without jobs, and the labour force participation rate, at 61.6%, is 3.1 percentage points below the pre-pandemic level. Lingering issues related to discouraged workers and skills mismatch are causing an odd mix of plenty of vacancies and plenty of jobless people.

Low interest rates, ample liquidity, changes in housing preferences owing to the lockdown experience, and growing optimism about the outlook have brought borrowers and lenders together to buoy the real estate market nationwide. Housing inventories are at record lows, pushing up prices sharply. Demand for home renovation and construction has picked up too, causing a rise in the price of home building and renovation materials. 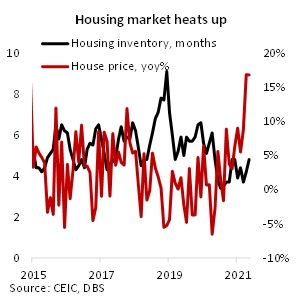 Deficit spending amounting to 27% of GDP between 2020 and 2021 has helped demand to sustain, helping production and retail sales. From autos to electronics, Americans are shopping with gusto, and producers are busy meeting the demand, often running into supply side bottlenecks. Chip shortages have slowed auto production, which in turn has caused record demand and price for pre-owned vehicles.

Cyclical rebound in housing and retail, and policy driven structural push toward green technology and improved infrastructure are creating sizeable momentum for investment. While some of the recent figures are flattered by favourable base effects, surveys of business owners and the pipeline of policy action suggest that capital spending is going to be strong for years to come. Our US investment forecast is only modestly optimistic, and yet that is sufficient to create space for close to 7% GDP growth this year, complemented by consumption and public spending. 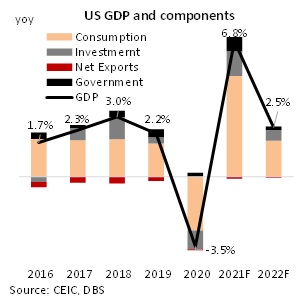 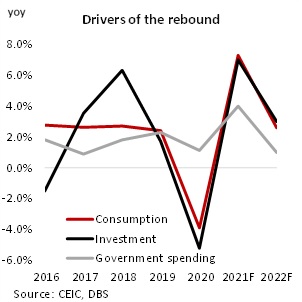 With a variety of idiosyncratic factors (chip shortage, livestock shortage, drought, busy shipping lanes) coming to the surface at the same time, especially when global demand is on an uptrend, inflation has picked up, unsuprsingly. This is beyond just base effects; there is substantive price pressure in a variety of activities, which may be heightened further as wages pick up. In recent years, higher input prices meant lower margin for producers, who were hampered by competition. With common shocks galore, this time may well be different. 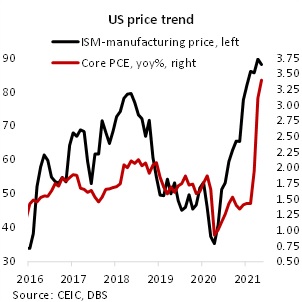 For all the talk of inflation and overheating, by the time next year ends, both price and output levels would still be below trend. The Federal Reserve’s average inflation targeting objective (2% over the medium term) would remain elusive even after sharply above trend inflation this year and next, as per our estimates. 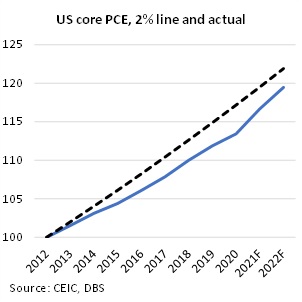 Similary, whether it is employment or GDP, despite enjoying an ongoing vigorous rebound, trend reversion is at least a couple of years away. 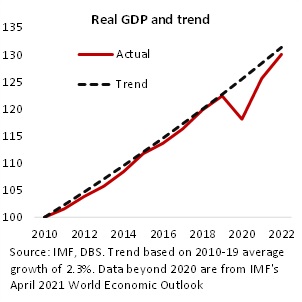 This is where the key point of contention between the markets and policy makers lies. As the economy heads toward trend, the expectation would be that some of the extraordinary support measures deployed during last year’s crisis would be removed gradually, especially those entailing asset purchases and income support for households. But policy makers are fearful of premature tightening, with the goal of letting the economy run hot to maximise labour market gains. Similar considerations are involved with the Fed’s “driving while looking at the rear-view mirror” approach to inflation targeting, which would rely less on forecasts and more on the recent track record.

Granted, the magnitude of the policy stimuli has been in record territory, which could cause difficulties in managing a well-controlled exit from ultra-easy policies. There is more than 100% of GDP worth of public debt which needs to be serviced and refinanced at low rates; there is also demand for higher wages and pubic support schemes through the legislative route. To meet these demands while maintaining credibility of price and debt management would be exceptionally challenging in the coming years.

The Fed’s hawkish pivot has prompted us to switch to a structural bear flattening view for the US Treasuries curve. 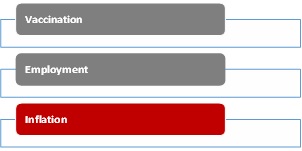 In our view, a Fed that is worried and willing to tighten policy to curb excessiveinflation risks should reduce inflationary worries. As such, rate hikes would be priced into the front of the curve (out to the 5Y tenor) but lower inflation risks should imply a gentler glide path higher for longer term yields (10Y-30Y). We have revised up our 2Y US yield forecast and revised down our 10Y yield forecast. We now see 10Y US yields touching 1.75% by end-2021 (from 2% previously). Our SGD and HKD rates have also been tweaked accordingly (forecast table behind). We had been in the steepening camp since early 2020 when the Pandemic crisis hit. More recently, we highlighted in February that the COVID-19 premium embedded in UST should be removed as the market has not yet caught on that vaccinations could take place in a more rapid pace than many had expected. This has played out with the curve steepening rapidly in 1Q. We think that peak curve steepness should be behind us as the Fed signaled via the dot plot that two hikes may be in the offing in 2023, pulling rate hike projections forward by a year compared to their March assessment. 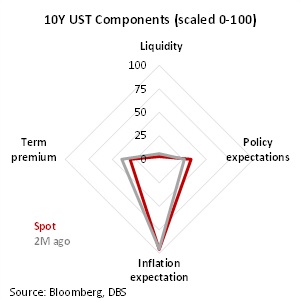 A significant proportion of FOMC members also saw liftoff as early as 2022, suggesting that there may be worries that inflation is less transitory than thought. Interestingly, there was no concrete information released on taper, which was the next step in monetary policy normalisation. In any case, we recognize that this is a pivot to a multi-year process of withdrawing monetary stimulus and real yields are set to rise. 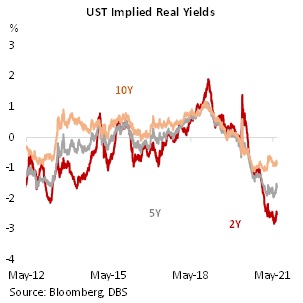 We believe that the normalisation path ahead will echo that of the period from 2013 to 2018 (see chart above). Back then, the Fed took about four years post the height of the Global Financial Crisis in 2008/09 before kicking off the tightening cycle. Even then, the pace was slow, with taper taking

place seven months after it got hinted and the taper process concluding over nine months. It took almost a year before rate hike took place and the pace was slow with China hard landing risks weighing in 2015/16. It was not until 2017 and 2018 that the Fed could hike in earnest (3/4 hikes per year). Through that episode, taper tantrum led to a spike in long-term yields in 2013 that was corrected over the course of 2014.

We reckon that the upcoming normalisation cycle will be more compressed (see chart in previous page). June’s FOMC meeting outcome (which provided a warning shot for less loose monetary policy), came barely a year after the worst of the Pandemic crisis. The recovery pace in the crisis is much faster than that seen in the Dotcom crash or the Global Financial Crisis as a mix of firm private sector balance sheets and aggressive fiscal policy helped. We expect a roadmap of taper to be unveiled in August/September. Taper to start in 4Q21 / 1Q22 and conclude in 2H22. Rate hikes are still more likely to begin in 2023, at a pace of about 2-3 hikes per year, in our view. The market appears to have skipped taper tantrums, perhaps due in part to the Fed’s very early communication of rate hikes. While market participants may revisit this theme, we are doubtful that there would be a significant impact on long-term rates.

There are nuances to our structural view on curve flattening. First, because there has been no taper tantrum thus far in the cycle, the pace of flattening is likely to be more muted than that seen in 2014. Second, the curve has already flattened aggressively over the past few weeks and a technical bounce may be due. Third, there may be scope for a bounce if a portion of Biden’s infrastructure plan or American Families Act get passed. Last week, a bipartisan infrastructure proposal (USD 579bn) was struck, marking a small step towards unlocking more fiscal spending. Moreover, major central banks including the European Central Bank (ECB) and the Bank of England (BOE) could taper (or hint on it) in September, driving longer-term DM yields higher. We think flattening trades in the 5Y/30Y and 2Y/10Y segments may make sense if spreads go wider than 140-150bps.