Asia Rates: Too early to call a peak

Asia swap rates and bond yields have retraced lower since mid-May, largely on the back of a pull-back in Fed hike pricing and US rates moderating from a local peak in early-May. In several Asia local currency government bond markets, there has also been a bounce in returns, allowing for some partial recoup of March-April losses. Naturally, at this juncture, we are assessing if Asia rates (ex-China) have peaked for this cycle and a proper recovery in Asia bond returns is upon us.

The recent pull-back in Fed hike pricing was driven by speculation that the Fed could turn less hawkish ahead if US economic data were to disappoint, increasing downside risks to growth. Hypothetically, we would then see US rates peak and stabilize at lower levels than previously expected, and support for the broad US dollar would also wane. In this case, a less hawkish Fed would likely be positive for Asia rates and bonds. However, at this point, we are not convinced. For us have some conviction that the Fed would soon turn less hawkish, we would need to see sequential US inflation turn much lower.

From a regional perspective, Asia central banks have pivoted hawkish or lifted off on policy rates only recently, and we have the bulk of Asia hike cycles still ahead of us. Our Asia inflation surprise indicators continue to show inflation expectations underestimating actual prints across the region. In fact, the extent of underestimation has been widening of late. Therefore, we think there remains material upside risks to Asia terminal policy rates and by extension, market interest rates. For us to think that this Asia hike cycle could be relatively short, we would need to first see a catch-up in Asia inflation expectations to actual prints. 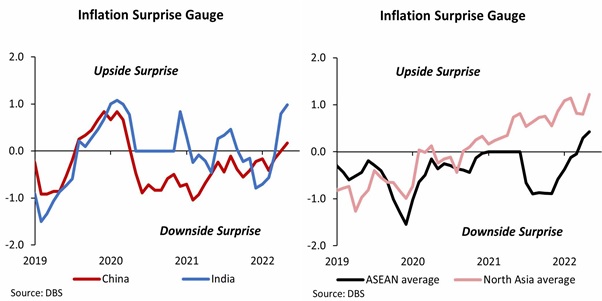 Notes: We compute 6-months moving-averages of the difference between actual CPI print and survey, scaled by the standard deviation of forecasters’ estimates.

In short, we are still in the early stages of Asia hike cycles and we don't think Asia rates (ex China) have peaked in May. Investors in Asia bonds should also stay cautious on bond exposures, at least until we get more clarity on the timing of peaks in US rates and broad US dollar. Looking at Asia bond technicals (Asia Rates: Flows, Positioning & Valuation (May 2022)), positioning appears to be quite light, but valuations are not cheap. We favour waiting for an improvement in bond valuations before looking for opportunities to turn more bullish on Asia bonds.

Several of our Asia rates ideas have recently hit take-profit levels. We add the below new ideas.

Lockdowns and mobility restrictions are expected to ease ahead and Chinese economic activity should continue to normalize, allowing CNY rates to be skewed higher in 2H. On the monetary front, prospects for more broad-based easing to push CNY rates lower appear to be limited. The window for rate cuts to 7D reverse repo and 1Y MLF has narrowed, due to global rate hikes and our expectations for an impending pick-up in economic momentum. Present liquidity support is about as good as it gets - 7D market repo rates are already trading 40-50bps below the policy reverse repo rate. Further RRR cuts, even if we get them, would not be taken as a signal of more easing measures to follow.

On the fiscal front, to support infrastructure spending and other fiscal initiatives, government bond issuances are also expected to be ramped up in the coming months, and the resulting duration supply could bear-steepen the CNY curve. Therefore, going into 2H, we think the aforementioned economic, monetary and fiscal considerations together support a strong case to pay 5Y CNY NDIRS.

We have a running idea for receive 2Y SGD OIS (SORA) vs pay 2Y USD OIS (SOFR) that was published in mid-April. The idea was a play that concurrent tightening by both Fed (via interest rates) and MAS (via FX) would drive outperformance of SGD rates relative to USD rates, due to interest rate parity relationship. In recent weeks, however, our conviction in the idea has been reduced. Market worries around US growth and global equity volatility are less conducive for our idea. SGD liquidity also appears to be somewhat tight, and as a result, passthrough benefits from a strong SGDNEER to SGD SORA rates are modest thus far.

For now, we will keep the idea running as we think that Fed hike pricing can rebound ahead if the Fed stays hawkish. But we tighten our stop-loss level from -0.20% to -0.30% to reflect our reduced conviction.

Market bias seems to be paid 5Y INR OIS/NDOIS and there are good reasons for such a bias. The weight of RBI's policy considerations has shifted away from economic support and towards taming inflation, suggesting that we should see a relatively fast pace of rate hikes ahead. And with inflation proving to be quite sticky, the risks around RBI's hike path are likely tilted to the upside. RBI is also expected to further withdraw surplus liquidity, and recent FX interventions would only quicken the pace of liquidity tightening. This FY's record bond supply should also mean healthy interest by local dealers to pay OIS, to hedge duration risks from the bonds that they absorb. We agree that these factors argue for a pay bias in OIS/NDOIS. However, we think that there is a lot of hikes and risk premium already priced into OIS/NDOIS curve and thus, trying to beat the high negative carry/roll would be quite difficult. Market pricing of RBI hikes are already quite frontloaded and priced terminal rate of around 7.15-7.20% is almost 100bps higher than our economist forecast. Therefore, we think it is unlikely that OIS/NDOIS pricing can get much more hawkish, and it could be worthwhile to instead receive 5Y OIS/NDOIS to fade.

The May BOK meetings has fundamentally changed our thinking on KRW rates. Prior to the meeting, we had felt that BOK would be first-in-first-out on policy normalization, and hence, we had favoured ideas to position for KRW rates peaking earlier than US or rest of Asia rates. However, the BOK has clearly become more hawkish now, communicating its priority to tackle inflation over supporting growth. Our economist expects the pace of hikes to quicken ahead, specifically more back-to-back hikes at the July and August meeting. We acknowledge that BOK hikes are certainly not under-priced with KRW IRS/NDIRS swaps reflecting a 3.50% terminal policy rate. But with Governor Rhee explaining that he sees a 2.5% policy rate by end-2022 as reasonable, we think there is still scope for markets to price more upside risks to BOK's terminal rate and hike path.

Our inflation surprise gauge for South Korea is also by far the highest within the region with a score of +2.0. I.e. The degree of underestimation of inflation is the greatest in Korea's case. In the coming months, inflation could continue to surprise to the upside, driving market's hike expectations to be repriced even higher. We position by initiating a pay 1Y1Y KRW NDIRS idea.