The RBI policy committee voted unanimously to increase the policy repo rate by 50bp to 4.9%, in line with our expectation.
Group Research, Radhika Rao08 Jun 2022

The Reserve Bank of India monetary policy committee (MPC) voted unanimously to increase the policy repo rate by 50bp to 4.9%, in line with our expectation. Consequently, the standing deposit facility (SDF) rate was adjusted to 4.65% and the marginal standing facility rate (MSF) and the Bank Rate to 5.15%. The Cash Reserve Ratio was left unchanged after a 50bp increase in the off-cycle hike in May. 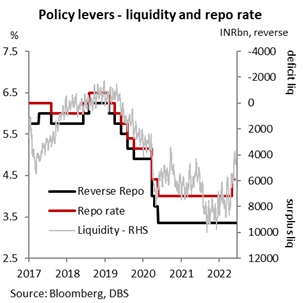 Notably, the term ‘accommodative’ was dropped from the stance, as the MPC maintained that they ‘remain focused on withdrawal of accommodation to ensure that inflation remains within the target going forward’, implying that the stance has shifted to neutral-to-hawkish gear. We interpret this as a pitstop towards a clear shift to calibrated tightening stance, to ensure the stance is in sync with the hiking cycle.

The policy commentary confirmed the primacy of price stability as a policy goal to prevent a hardening in adaptive inflationary expectations. FY23 CPI inflation was revised up by 100bp to 6.7% yoy, while GDP growth projection was left unchanged at 7.2%. A host of drivers were highlighted as risks to the inflation trajectory, including,

The tone on growth was more constructive as the FY23 growth forecast was maintained at 7.2%, seen benefiting from the likely normal south-west monsoon (and subsequent boost to farm output), rebound in contact-intensive services, improving capacity utilisation rates, government’s capex, and better trade performance. The external environment, especially spillover from prolonged geopolitical tensions, commodity prices, continued supply bottlenecks and tightening global financial conditions are seen as risks to the outlook. Our growth forecast is more conservative at 7.0%, with downside risks.

The decision to remove ‘accommodative’ from the guidance implies a shift in the underlying policy bias towards a neutral-to-hawkish bent. Amidst signs that price risks are broadening out and turning persistent (we discuss details in the next section), frontloaded action will be key.

The central bank’s pivot, backed by the upward revision in the inflation forecast, lays the ground for further action, but at a calibrated pace. The next 25bp hike in August will return the repo rate to the first goalpost i.e., pre-pandemic pace of 5.15%. Thereafter, between Sep22 and Apr23, we expect a cumulative 100bp worth increase in increments of 25bps. The terminal policy rate is likely to stay data dependent, with our forecast is for the level to be above 6.25% by mid-2023.

On liquidity, Governor Das recalled that that the introduction of the Standing Deposit Facility (SDF) as the floor of the liquidity adjustment facility (LAF) corridor at 3.75% earlier was effectively a 40bp hike vs the fixed rate reverse repo of 3.35%.

Add to this, the weighted average call money rate (WACR) i.e., the operating target of monetary policy had moved from an average of 3.32% to 4.07% during May 5-31. The RBI noted that that systemic liquidity had moderated, evidenced by the pullback in the average daily absorption under the liquidity adjustment facility (LAF) i.e., absorption under SDF and variable rate reverse repo (VRRR) of 14 days and 28 days at INR 5.5trn during May 4-May 31 vs INR 7.4trn during April 8-May 3, 2022.

In all, this moderation in surplus liquidity had likely lowered the need for a follow-up CRR hike. Towards bond yields, no specific measures were announced but an increase in spending obligations and supply-demand mismatch is likely keep yields buoyant, necessitating central bank’s support.

Former US Fed Chairman William Martin said at one FOMC meeting "Inflation is a thief in the night and if we don't act promptly and decisively, we will always be behind."  The RBI faces multiple and conflicting objectives at this juncture, including the need to rein in inflation, withdraw liquidity, support the currency, and stabilise bond yields. Amongst these, price stability which is the primary mandate of the central bank is likely to take precedence amongst signs that risks are becoming more generalised and persistent. We revise up our FY23 inflation forecast to 6.8% yoy vs 6.4% presently.

Firstly, average, median inflation and our trimmed mean measure – top 10% as well as top 20% - has moved up a gear between Jan20 and Apr22 compared to the time since the inflation targeting regime was adopted in the mid-2016 as shown in the chart. 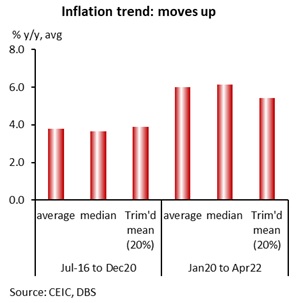 Secondly, the number of CPI inflation segments that are registering above 4%/5%/6% yoy increase i.e., higher end of the inflation target range have risen significantly. Compared to a quarter of the sub-components rising by above 6% pace in early 2020, ~60% are now above this mark at present, suggesting a broadening out in price pressures. 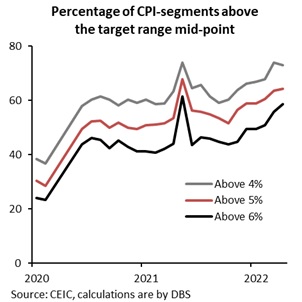 Thirdly, while goods inflation (buoyant commodities continues to pan out) has dominated the run-up in price pressures, the pass through in services is incomplete and thereby is likely to exert upward pressure over the next three-six months.

Finally, inflationary expectations are adaptive, and the central bank expects the government’s move to lower excise duties on fuel to have a salutary impact on these expectations. However, this could be offset by further rise in commodity prices or input prices, necessitating appropriate monetary policy measures, which in the current cycle would involve tapping the brakes on demand to rein in price pressures.

Globally, amidst inflationary concerns globally and food security assuming priority, several countries have taken measures to ensure sufficient domestic stockpiles to help contain prices, and lower hardship amongst the populace. Globally, since the Ukraine crisis, about 16.9% of the share of global trade impacted (by calories) has faced some extent of food export restrictions, higher than in wake of the pandemic as well as 2007-08 crisis. Since Mar20, about 19 countries have imposed an actual ban, whilst seven have imposed export licensing (see chart), according to data from International Food Policy Research Institute. 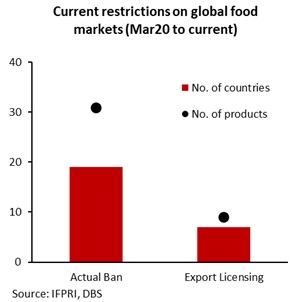 Given these risks and being a commodity price taker, the RBI MPC is likely to keep a close eye on the evolving inflation outlook and tighten policy reins in a calibrated fashion.