The Eurozone economy emerged from the pandemic-driven downturn in 2Q21, with GDP growth at 13.6% YoY reversing from -1.3% in 1Q. The core-4 member countries logged sequential expansion in the quarter, with trend real growth inching towards early-2020 levels (see chart). Reopening gains, pent-up demand and high vaccination rates have helped member economies recover from the trough, but bouts of Covid resurgence and supply chain disruptions might make the 2H ride bumpy. Covid cases have risen in parts of the region, even as the count is lower than previous waves. A concurrent rise in the R0 i.e., reproduction rate underscored the prevalence of the more transmissible Delta variant. Encouragingly, the R0 rate peaked in July and has since eased. The region is progressing well on the vaccination rollout, with hospitalisation rates and usage of medical capacity still at manageable levels.

The European Commission’s economic sentiment jumped to a two-decade high in June, led by the services, industrial sector, and employment sentiments, before easing a touch in July. Retail sales are holding up, with consumption also likely to get a leg-up from forced savings in midst of restrictions. Investment interests look favourable with the investment index bouncing up into mid-21. These could get a further fillip by the upcoming outlays under the Next Generation EU initiative and upbeat housing market.

Capacity utilisation rates have risen, although industrial production in key industries is being disrupted by supply chain constraints. External trade has fared well, with the trade surplus up 12%yoy during Jan-June. Fiscal policy is likely to remain expansionary, as support measures are bound to be extended. In light of a stronger 2Q, we adjust our growth forecast modestly to 4.3% for 2021 and 4.0% in 2022.

Base effects, business resumption, supply factors and transient factors (e.g., German VAT expiry etc.) led headline inflation to quicken past the 2% target by mid-2021, with headline CPI to a multi-year high of ~2.8% in 4Q21. On the year, we adjust our inflation forecast up to 2.1% before the base effects reverse in 2022, easing the headline to 1%. The inflation development is unlikely to perturb the ECB, as the policy strategy review provides policymakers with the headroom to accept “a transitory period in which inflation is moderately above target”. This suggests that the ongoing buoyancy in inflation prints is not reason enough for the central bank to turn cautious, and that frontloading of the asset purchase program i.e., PEPP remains on course, after EUR1.25trn purchases by July. 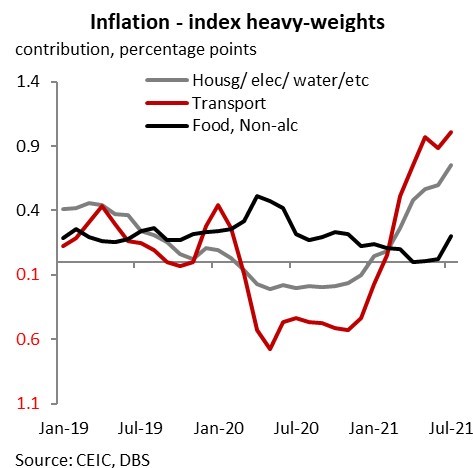 A decision on when to end the EUR 1.85trn PEPP program (which runs till Mar22) might be undertaken in 4Q21. There is also a likelihood that even if part of the ‘crisis response’ via the PEPP ceases, bond purchases might continue under the existing regular Asset Purchase Program. The ECB is likely to lag the US Fed in its policy normalisation decisions. 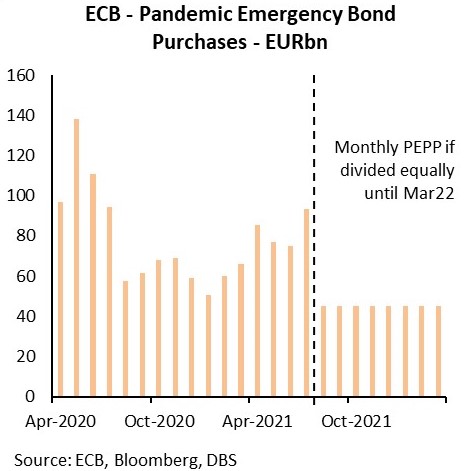 GDP growth forecast for 2021 is lowered to 2.2% from 2.8%. After marginally averting a technical recession in 1H, the economy is expected to remain stagnant in 3Q and grow modestly only from 4Q onwards. This considers the longer-than-expected impact from the Covid pandemic and the possible peaking of exports cycle, which offset the positive effect of the Tokyo Olympics.

Due to the spread of Delta variant, the number of Covid cases in Japan has surged to a new record of 10-20k per day since end-July. The cumulative number of infections has exceeded 1mn, equivalent to 1% of total population. Thankfully, vaccination has also gathered pace. The share of the population that received at least one vaccine dose has risen to 50% as of late-August, while that fully vaccinated has also risen to 40%. Meanwhile, Japanese consumers appear to have adapted to the Covid state of emergency, which is evidenced by the weakening of correlation between Google mobility data and government stringency index. As such, we think consumption will stay below the normal levels for an extended period in 2H but a sharp decline could be avoided.

On the external front, exports growth may have peaked in 2Q and will likely ease towards the end of this year. Demand from the US, EU and Asia NIEs, where the vaccination rate picks up and economic activities normalise, is expected to stay resilient. On the other hand, demand from China and ASEAN (nearly 40% of Japan’s total exports) will likely weaken, as a result of China’s regulatory crackdown and the Delta-related slowdown in these economies. As far as the specific products are concerned, exports of electronics and chemicals are expected to remain strong, as the upturn in global tech investment cycle lifts demand for the Japan-made semiconductor equipment and materials. Automobile exports will likely see a slowdown, however, partly due to the continuation of global chip shortage and partly also due to the fading of low base effect.

The Bank of Japan is expected to keep the policy rates unchanged at the remaining three meetings this year (short-term: -0.1%, long-term: 0%). In contrast with the Fed that is set to withdraw QE stimulus, the BOJ still maintains a dovish stance on monetary policy due to growth uncertainties and deflation concerns. The latest move from the BOJ was to extend a special funding programme for the pandemic-hit companies by six months to March 2022. Policymakers kept the door open to extra easing, including further cutting the policy rates and targeting the longer-dated JGB yields. The divergence in monetary policy stance between the BOJ and the Fed helps to explain the yen’s 6% depreciation versus the dollar during the first seven months this year.

The government is expected to increase fiscal spending via a supplementary budget in 4Q, in face of economic uncertainties and the lower house election that will be held before the year end. Pressure on JGB yields is likely to remain mild, given that 90% of outstanding JGBs is held by the BOJ and domestic financial institutions. The 10Y JGB yield has stayed well within the BOJ’s ±0.2% target band thus far this year, slipping towards zero in August as economic uncertainties outweighed public debt concerns.

With regard to the upcoming lower house election, the ruling LDP party and its coalition are likely to win enough votes to stay in power, in the context of the fragmented oppositions. But PM Suga would face challenges to retain the position as the LDP president, given the continuous decline in the approval rating for his cabinet to record lows (Kyodo survey: 32% in mid-August). In addition to fighting the pandemic over the past one year, PM Suga has pledged to make Japan carbon neutral by 2050 (e.g., boosting the use of renewable energy, expanding green financing initiatives) and affirmed the alliance cooperation with the US (e.g., investing together in 5G, AI, semiconductor supply chains). These long-term policies, which receive the majority support within the LDP, are expected to remain basically unchanged after election.