We give an interim update of the DEER Strategy's returns amid elevated volatility, examining factors driving markets now and providing our outlook for USD, JPY, GBP and the EUR.
Group Research, Chang Wei Liang13 Sep 2022

Since our last DEER recommendations in early August (see FX: DEER recommendations (August 2022), 3 Aug 2022), currency markets had seen a significant jump in volatility,  warranting an interim update on returns of our DEER strategy’s constituents. Misalignments from our fair values have now widened even further, with the JPY falling by 7.3% against the USD, and the GBP also declining by a sizeable 4.8%. We discuss the reasons behind such large short-term volatility, and assess the outlook. 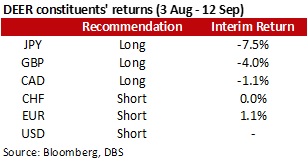 Much of the recent FX volatility could be ascribed to continued hawkish Fed guidance. In his Jackson Hole speech on 26 August, Fed Chair Powell had emphasized that the Fed would maintain a restrictive policy stance, given past lessons that caution against prematurely loosening policy. This was a markedly more hawkish guidance than previously said, precipitating a jump across the entire US yield curve, which in turn boosted the USD broadly, most notably against the JPY and the GBP. 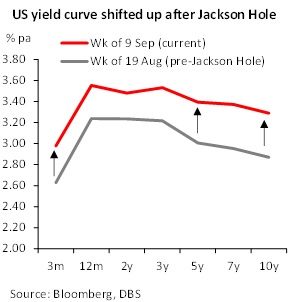 With the BoJ keeping 10y JGB yields well-anchored with its yield curve control policy, the rebound in US10y yields from 2.60% in early August to 3.30% now drove a sharp widening in yield differentials between USTs and JGBs. USD/JPY, being sensitive to such differentials, has also risen sharply from 132 towards 145. Still, rate differentials are not higher compared to 2018 levels, but USD/JPY has moved a much longer way. Furthermore, it is now near its 1998 peak, where there was a joint intervention by the US Treasury and Japan MOF to support JPY. 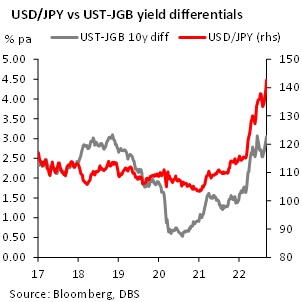 Could the similarly weak JPY today trigger intervention like in 1998? The US Treasury has not expressed a desire to intervene and is maintaining that exchange rates should be market-determined, and a unilateral intervention by Japan is not as effective. That said, Japanese policy rhetoric has stepped up over the sharp JPY weakness. Both Finance Minister Suzuki and Chief Cabinet Secretary had underscored that rapid, one-sided JPY moves are undesirable. The same sentiment on elevated JPY volatility was also echoed by BoJ Governor Kuroda. Given the high volatility and sharp JPY depreciation thus far, policymakers’ tolerance is becoming stretched, and such rhetoric could be a signal for JPY traders not to get carried away.

More durable JPY relief is likely to lie around the Fed’s policy tone, particularly on whether US yields are close to peaking. Already, US 1y inflation expectations have tumbled sharply from 5.9% in June to 2.5% as September. Inflation traders now expect US inflation to ease sharply in the next 12M, and lower inflation will perhaps render it unnecessary for the Fed to surprise with more hawkish rhetoric. This may create conditions for a top in US yields, helping to reverse momentum in USD/JPY.

One final factor for JPY weakness is rising oil prices—a bane for Japan’s trade balance which has ballooned to a deficit of USD101bn in July from a surplus of USD37bn just a year ago. But with oil prices now falling back to levels prior to the Russia-Ukraine war, terms of trade dynamics are shifting in favour of Japan and the JPY. Japan is also reportedly planning to scrape its 50k daily arrival cap for tourists by October, which could bring forth a wave of visitors that should be a boost for the economy and support a narrowing of the JPY’s heavy undervaluation.

GBP’s loss against both the USD and EUR of late has coincided with Elizabeth Truss’s elevation as PM, with markets being apprehensive of fiscal policy changes. Thus far, Truss has not shied away from comparisons of her to Margaret Thatcher in policy. Pointedly, she has argued for cancelling the proposed corporate tax hike from 19% to 25%, as well as reversing the increase in National Insurance Contributions, both announced by her erstwhile rival, ex-Chancellor Sunak. UK fiscal policy will become looser than it would otherwise be. It is uncertain if her tax cuts could deliver the same boost to growth as those under Thatcher, who had initiated cuts in the context of historically high income tax rates. Nevertheless, Truss’s tax cuts may turn out to be well-timed if they could avert a recession amid slowing momentum in the UK. 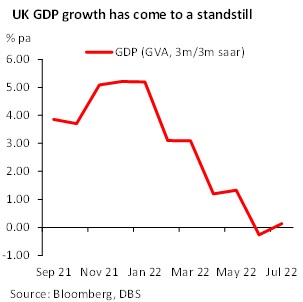 Like Europe, the UK also has to contend with a spike in energy costs going into winter. Truss has taken a fiscally expansionary approach to the energy issue, announcing caps on electricity and gas rates for households (and businesses to a lesser extent), which effectively act as a government subsidy. Unlike EU counterparts who are funding energy measures by taxing non-gas electricity producers (who are “profiting” unexpectedly from high electricity rates), Truss has decided to eschew such windfall taxes. As such, her energy price caps are not funded by any new revenue measures, and could cost the Treasury as much as GBP150bn (4.7% of GDP), becoming a significant fiscal stimulus over two years. Between being pro-business or fiscally prudent, Truss has chosen the policy trade-off in favour of the former.

Similar to the fuel subsidies that are commonly implemented in Emerging Asia, the UK’s energy price caps should help bring down the peak in energy inflation and arrest its second-round effects on prices. But unlike fuel subsidies, we think such power and gas caps should not distort usage as they relate mostly to heating, which is a necessity of life. Thus, such price caps are unlikely to lead to a material widening of the UK’s current account deficit, quite unlike the case of fuel subsidies in Asia. One could argue that these caps serve an economic purpose, which is to smooth an unplanned transition given the sharp disruption to global gas supply, perhaps of equal magnitude to the post-1979 Iranian Revolution oil shock. Given softening growth and a rare energy shock, such policy is not necessarily fiscal largesse. A countercyclical boost with tax cuts and subsidies is economically orthodox.

Finally, Truss had mentioned that a review of the BoE’s mandate may be warranted. However, it is important to note that her comments were a response to angst over high inflation. Like Thatcher, Truss should be vigilant on inflation, and the likelihood of a consequential change with regards to the BoE’s 2% inflation target is not large.

All in, GBP apprehensions are not too surprising in the context of fiscal uncertainty under a new leader. Ultimately, such fiscal fears could prove overdone, as is the GBP sell-off. If policy shifts engender a less pernicious growth and inflation outlook for the UK, they may well catalyse a narrowing of GBP’s substantial undervaluation.

Certainly, it is not just the UK facing tough choices on fiscal dynamics and energy costs. In Europe, markets will watch Italian general elections to be held on 25 Sep. While the right and the left are expected to poll similarly, parties on the right are in coalition, while parties on the left are split. Thus, seats allocated on first-past-the-post basis will likely go to the right, and this should help the right-wing coalition secure a majority. The Brothers of Italy (Fratelli d'Italia or Fdl) is polling the best and its party leader, Giorgia Meloni, is positioned to become the first woman Prime Minister in Italy.

While there is little in the way of policy details for the right, the FdI is well-known to be strongly nationalist. Meloni has promised voters that she will amend Italy’s approved EU national recovery plan, asking to use EU funds to subsidize consumers’ energy bills. This directly conflicts with Brussels’ intention, which has stated that EU funds are meant to develop infrastructure, not offset energy bills. Issues surrounding the Italian Budget and NextGeneration EU funding could become bogged down with a nationalist leader, and may imply fresh uncertainty for Italian debt. The EUR may see sentiment cool if Italian bonds wobble amid fiscal uncertainty. The EUR’s relatively strong valuation against both the JPY and the GBP could be an additional headwind. 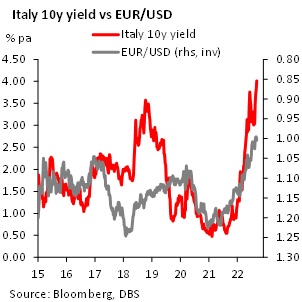 GlobalEconomics & Strategy
Disclaimer and Important Notice
The information published by DBS Bank Ltd (“DBS”) is for information only. It is based on information or opinions obtained from sources believed to be reliable and to the maximum extent permitted by law, DBS does not make any representation or warranty (express or implied) as to its accuracy, completeness, timeliness or correctness for any particular purpose. Opinions and estimates are subject to change without notice. Any past performance, projection, forecast or simulation of results is not necessarily indicative of the future or likely performance of any investment or securities. The information published is not and does not constitute or form part of any offer, recommendation, invitation or solicitation to subscribe to or to enter into any transaction; nor is it calculated to invite, nor does it permit the making of offers to the public to subscribe to or enter into any transaction, and should not be viewed as such. DBS, its related companies and affiliates (“DBS Group”) and its respective directors, officers and/or employees may have positions or other interests in, and may effect transactions in securities mentioned and may also perform or seek to perform broking, investment banking and other banking or financial services to any persons or entities mentioned. To the maximum extent permitted by law, DBS Group accepts no liability for any losses or damages (including direct, special, indirect, consequential, incidental or loss of profits) of any kind arising from or in connection with any reliance and/or use of the information (including any error, omission or misstatement, negligent or otherwise) or further communication, even if DBS Group has been advised of the possibility thereof. The information is not intended for distribution to, or use by, any person or entity in any jurisdiction or country where such distribution or use would be contrary to law or regulation.