Four developments convince us the winds are blowing strongly in this direction.
Radhika Rao25 Oct 2021

Renewed vigour on the inclusion efforts

This is an update to our previous note - Assessing prospects of bond index inclusion where we discussed India’s plans for inclusion into global indices in detail.

The narrative from the Reserve Bank of India (speech) and the government has been encouraging in recent months, pointing to a renewed vigour in inclusion efforts. Clearance of existing investment hurdles will pave the way for index investors, likely in 2H22, with flows to partially front run the inclusion. On a related note, our primer on India’s bond markets can be found here - India’s onshore bond and FX markets: A Primer.

For investors, in the near-term India’s strong recovery in multiple sectors to pre-pandemic levels (see our high frequency Weekly Activity Gauge), amidst improving vaccination rates is a key draw factor. With the daily caseload now a fraction of the peak during the second wave, the most adversely affected services sectors have also reopened in recent weeks. There is underlying caution over a potential third wave as the country heads to major festivals from September to year-end. However, barring the risk of new variants, onset of a third wave is expected to be less fatal, as the vaccination picks up (we expect more than half of the eligible population to be fully vaccinated by end-2021), higher natural immunity according to seroprevalence surveys and better administrative preparedness by way of a ramp up in the medical oxygen supply and medical capacity. Notwithstanding base effects, the economy will be fastest growing major economy this year, before returning to 6-7% annual growth subsequently. 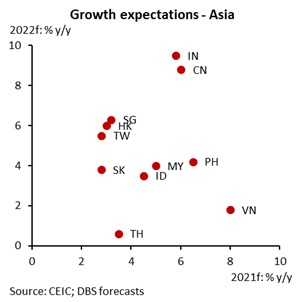 Foreign debt investors have been net sellers in past 3-4 years, due to high inflation which has impacted real returns, rising fiscal borrowings, and rupee movements. Barring sticky inflation, other macro balances are in a better shape e.g., strong revenues and slower spending point to a smaller fiscal deficit than budgeted in FY22, whilst the current account deficit will stay manageable under -2% of GDP.  The reform machinery also continues to gather steam, providing a structural tailwind (see here). For foreign debt investors, India’s absence in global bond indices makes their investments ‘non benchmark’ or ‘off-index’, thereby limiting the participation to active funds. An addition will translate into stickier and passive fund flows as most will be benchmarked to the index.

For the economy, foreign investors offer a diversification in the investors pool, which is at present is dominated by domestic players, including commercial banks, the RBI, insurance companies, amongst others. Due to limitations on foreign ownership and other nuances, foreigners are under-represented at this juncture, with their share of outstanding debt at sub-2% as of June 2021 vs 6% cap on the ownership. Stickier and strong flows also bode well for the balance of payments math, adding to overall resilience against external shocks.

Four developments convince us the winds are blowing strongly in this direction.

The share of foreigners’ holdings of these FAR securities has been largely steady in the past year, even as the value of holdings has risen, considering the rise in overall bond issuance. Notably, the share of overall foreign holdings in outstanding central government securities has slipped below 2% by mid-2021, whilst that of FAR securities stands at 3.3%. With the FAR securities freely accessible to investors, there is a likelihood that these will be included into the indices, for a start.

Inclusion into the global bond indices will attract less volatile and passive investment flows into the domestic markets. As we had highlighted in Assessing prospects of bond index inclusion, with respect to assets under management (AUM), about USD200-220bn worth funds are benchmarked under the JPM GBI-EM, while ~USD2.3-2.5trn tracks the Bloomberg Barclays Global Aggregate Index (GABI). Every 1% weightage can potentially draw in inflows worth USD2-3bn (JPM GBI-EM) and ~USD20bn (BB GAI) respectively.

For a start, if the FAR securities are included, India’s index weights could be in vicinity of up to 0.5% in the JPM GBI-EM and a bigger 10% on the Bloomberg Barclays GAI, potentially attracting a cumulative US$20-25bn, which can rise further if non-FAR securities are considered over the coming years. In addition to the ongoing discussions with the ICSDs which will require regulatory changes, we also note that there is typically a lead time for the process by way of buy-in by stakeholders etc. before the eventual inclusion. For instance the Bloomberg Barclays Global Aggregate Index is in midst of adding Chinese government and policy bank bonds over a span of 20 months since April 2019.

In March 2021, another global index FTSE Russell placed India on the Watch List for potential reclassification of its Market Accessibility Level from “0” to “1”, and consideration for inclusion in the FTSE Emerging Markets Government Bond Index (EMGBI) as part of its semi-annual country classification. This watchlist inclusion marks an important first step for India’s securities to be considered for eventual inclusion into a global index, with more than US$3.75trn reportedly tracking the cumulative FTSE Russell indexes. India was retained on the watch list at the September 2021 semi-annual review, pending the next update in March 2022. Besides maintaining discussions with the RBI, FTSE Russell has sought clarity on margin requirements and trade reporting, as well as ongoing reforms to the taxation regime which will improve the chances of GSecs being available on global settlement platforms. These are seen as prerequisites to support a future reclassification of India’s market accessibility levels.

On the macroeconomic front, the need to lift India’s potential GDP growth levels is likely to see government spending remain high, by extension underpinning annual borrowings of US$100-120bn. Provided the inflation trajectory remains favourable and fiscal consolidation is adhered to, foreign bond purchases will be an additional and relatively stable source of demand. This will help limit the rise in borrowing costs, by extension propping the INR. However, we don’t expect sustained one-way appreciation in the currency given the policy preference to buffer the reserves stock by keeping INR volatility under check and competitive vs ACJ currencies despite strong flows.

China’s onshore bond market is the world’s second largest, while its onshore FX market is Asia’s fourth largest and growing steadily. In April 2019, Chinese government bonds and policy bank bonds were included in the Bloomberg Barclays Global Aggregate Index for the first time, of which China is projected to comprise around 6% upon full inclusion. This could generate around USD150bn in potential inflows over 20 months as these Chinese bonds are phased in.

JP Morgan added Chinese government bonds into its Global Bond Emerging Market Index in February 2020. FTSE Russell has also announced to include CGBs into its World Government Bond Index, starting from October 2021. Inclusion of Chinese bonds in all the three major indices is estimated to bring a total of USD300bn inflows. For more details on  China’s bond markets, please  view our primer - China’s onshore bond and FX markets.