A rerun of the positive flows outlook is likely in 2020 if conditions stay conducive.
Radhika Rao03 Jan 2020

Most global central banks ended 2019 on a dovish note and remain on stand-by to provide further policy support to offset any slowdown risks. This has left global interest rates low and foreign liquidity in surplus, helping India attract USD19bn worth net portfolio inflows in CY2019, strongest since 2017. Foreign flows into equities was the highest in nearly six years. Removal of tax surcharges on FPIs coupled with outperformance of domestic equity markets have drawn investors, with FPIs making more a third of the free float. Higher equity flows made up for a moderation of flows into the debt markets, which nonetheless recovered from net outflows in CY2018. Flows into debt were more cautious as fiscal risks are being eyed, while interests into corporate bonds have been comparatively more subdued. Net FDI has risen 16% in first ten months of the FY20 compared to the same period year ago. Destination-wise, higher interests were registered from the US, Germany, Mauritius, Singapore and Netherlands during 1H19. ‘Pull’ factors include proactive measures by the government to lower ceilings, focus on improving the ease of doing business and promise of a growing middle class, as well as ‘push’ factor of rising protectionist investment tendencies globally and need for diversification of investment locations.

Second, Brent prices have averaged USD65pb year-to-date in FY20 vs USD70pb year before. The oil import bill is likely to be lower by 10% (and improvement in the net oil balance) this year after double-digit rise in the past two. This is expected to keep the FY20 current account deficit in control, poised to narrow to -1.4% of GDP vs -2.1% last year. Slower growth in non-oil and non-gold imports due to weaker domestic demand vs external demand also limited the deterioration in the trade balance. 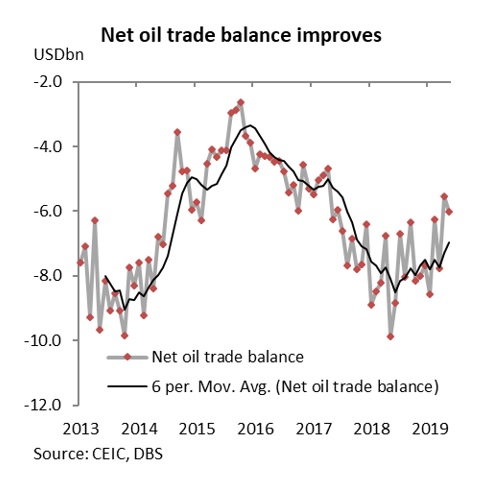 Banking on favourable preconditions in 2020

A rerun of the positive flows outlook is likely in 2020 if conditions stay conducive.

Bias for global central banks, including the US Federal Reserve, European Central Bank, Bank of Japan, Bank of England, amongst others, is to retain a dovish bias and readiness to do more if the growth outlook unexpectedly deteriorates faster-than-priced in. In the past, periods of accommodative policy by global central banks (case in point post-GFC and 2019 vs periods of tighter policy in 2013 & 2018) have resulted in strong flows into India, supporting the overall balance of payments outlook.

Geopolitical risks, however, bear watching, which could append the risk environment. Near-term progress on the US-China trade war rests on the success of the phase one agreement (likely to be signed in mid-January). Brexit developments will gather momentum in early-2020 and through the transition period by end-year. US elections and Eurozone politics are other watch factors. International agencies have highlighted concerns over a built-up in global debt, particularly in the emerging markets space, which poses a risk to investment decisions at the margin.

DBS commodity analysts expect Brent prices to remain range-bound, holding around US$60-65/bbl in 2020/2021, with a bias towards the higher end of the range. Despite lower OPEC+ production going into 2020, the crude oil market will be well supplied, with global supply growing by around 0.8-1.0mmbpd, largely in line with 2020 global demand growth of 1.0mmbpd. A faster de-escalation of the trade war, better-than-expected OPEC+ compliance or intensification of geopolitical risk in the Middle East could drive oil prices beyond our forecast range.

A Bloomberg survey of fund houses/ asset managers conducted late last year saw a majority express interest in expanding their exposure to India’s bond markets, if access is less restrictive. About 43% cited the need for clearer regulatory guides, followed by 20% for new account processes, and 17% for internationalisation of the bond markets. In midst of strong foreign flows, speculation is rising for a renewed interest for inclusion into key global benchmark bond indices. This will help draw in active as well as passive fund interests into the domestic financial markets. As a precursor, foreign limits on government bonds will need to be raised from the current 6% (i.e. USD51.6bn in GSec bonds). Press reports cite a likely rise to 10%. Existing limits are, however, yet to be fully utilised as investors eye domestic risks including fiscal slippage concerns and sub-par weak revenue growth. Expectations are also rising that changes in the statutory FPI stake in companies could boost its weightage in benchmark EM indices. 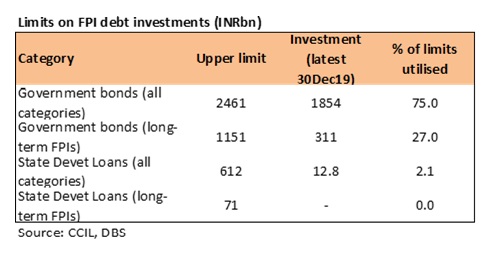 Domestically, affirmative action is underway. In the face of strong flows, Indian authorities have maintained a prudent and defensive approach. The central bank has been focused on foreign reserves accumulation since the 2013 taper tantrum. India’s foreign reserves have not only risen by the most amongst its Asian peers in the past five years, but the stock continues to notch record highs (see chart on right). Besides flows, strong reserves help contain vulnerabilities arising from a rising external debt, owing to higher external commercial borrowings last year.

Further supportive action is also forthcoming on the markets end. In a bid to address the hardening in longer-tenor bond yields since the December policy review and ahead of the Budget, the RBI carried out two tranches of special open market operations in December 2019 (see our note here). We reckon that this ‘Op-Twist’ move is part of broader measures by the central bank to expedite policy transmission, when seen in the broader context of prodding banks to peg part of the loan book to external benchmarks, maintain an accommodative policy bias, provide support to non-bank institutions and keeping liquidity ample. More steps are likely to smoothen the liquidity and credit premia aspects of the lending rates to hasten the pass-through of an easy monetary policy.

If oil prices stay close to our forecasts, this will provide much needed respite to the current account balance. 3Q19 (second quarter of FY20) current account deficit narrowed to 0.9% of GDP vs -2% in 2Q19 as the trade deficit moderated, while the services surplus stayed stable on better software receipts and resilient remittances. Net capital inflows moderated at the margin but sufficient to push the quarter’s BOP to net surplus. 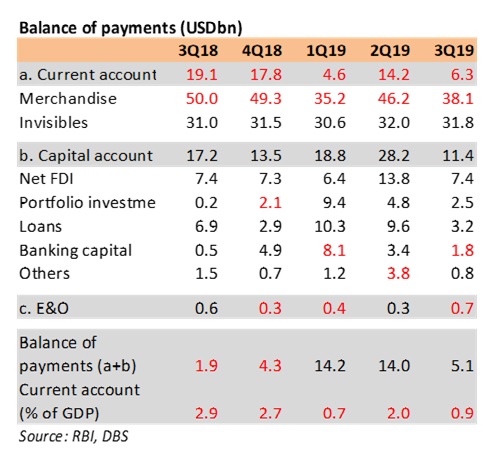 We expect these dynamics to extend in the rest of the fiscal year. Our forecast is for FY20 CAD to narrow to -1.4% of GDP vs -2.1% last year. Assuming a modest improvement in domestic demand, in turn a tick up in non-oil non-gold imports, the deficit could widen marginally in FY21 (to -1.8%) but stay sub-2% for a second consecutive year. 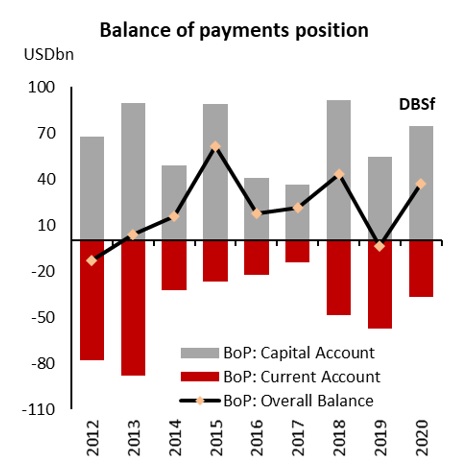 Balance of payments is expected to register a net surplus in both years (DBSf: USD35bn, USD25bn respectively). Impact of steady inflows on the currency will be mitigated by active central bank presence to contain volatility and limit stretched one-sided strength.