December readings from manufacturing PMIs for EM Asia suggest a trough in the region. At the country level, Malaysia may be stabilizing (reading of 50), after 14 straight months of contraction. South Korea and Taiwan, two countries most reliant on semiconductors/electronics exports, concurrently registered expansions, a first in 2019. In contrast, the trend remains unfavourable in key developed markets. US likely expanded but at a weaker pace in December, while Japan, the Euro Area, and UK stayed in contraction territory. If a global cyclical recovery is indeed underway, Asia is probably leading the way. 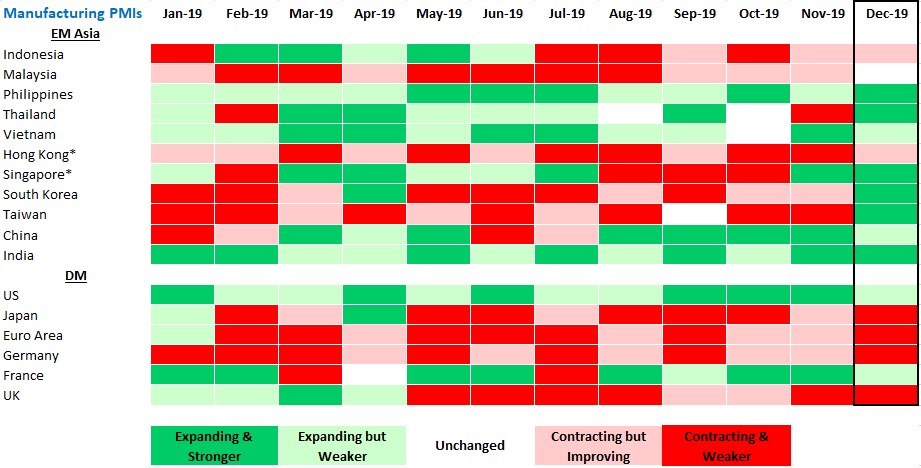 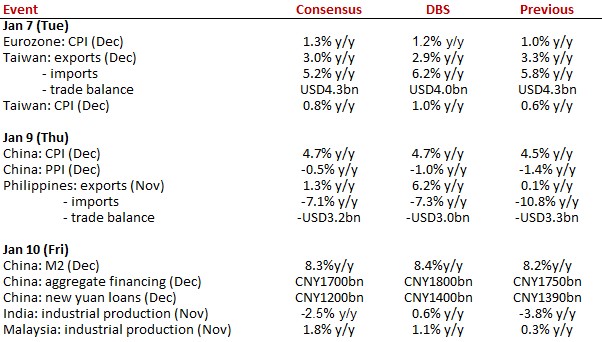 China: The PBOC is guiding commercial banks to convert outstanding loans to be based off the revamped loan prime rate (LPR). Given its divergence from the existing benchmark lending rate (1Y: 20bps), we should see some downward pressure on the average borrowing costs. As such, loans and aggregate financing are projected to hold up well in December. Likewise, M2 is expected to grow by 8.4%, compared to 8.2% YoY in November. Looking ahead, the 50bps reserve required ratio (RRR) cut effective today should release about RMB800bn and thus ease financial conditions. Borrowing sentiments should therefore see a revival down the road. Such loosening will translate into some upward pressure on inflation. Pork prices should stay elevated due to the spread of swine fever. The CPI is forecasted to rise by 4.7% YoY, up from 4.5% in November.

Eurozone: Inflation moderated to 0.9% YoY during July-November 2019, vs 1.4% in 1H. We forecast December inflation at 1.2% YoY, which will reaffirm a softer 2H19. A release close to our forecast will take 2019 average to 1.2%, weakest since 2016. While the headline remains benign, core inflation has surprised on the upside in recent months – up 1.5% YoY in November due to firmer service prices. Considering softer economic activity, absence of further decline in the unemployment rate and weak inflationary expectations, the spurt in core inflation is unlikely to sustain. Our estimate for 2020 is for the headline to stay steady at 1.2%, below the 2% target and thereby keeping the ECB from normalising policy anytime soon.

India: November industrial production due in the second half of this week likely returned to black after three months of contraction. Our forecast is for a tepid 0.6% YoY rise vs October’s -3.8%. A number close to our estimates coupled with a bounce in the December PMI and festive-driven lift to auto sales mark an encouraging start to the year. Breakdown of the production numbers will also be watched with interest amidst broad-based deceleration in recent months – consumption as well as investment categories. Some fillip is likely from steel and utilities, while manufacturing activity likely slowed to a smaller extent. Few more datapoints need to be watched closely to gauge if a bottom is in sight for the slowdown and a gradual recovery will be underway from the start of 2020.

Malaysia: Industrial production figure for Nov19 is on tap this week. Expectation is for an improvement to 1.1% YoY, up from 0.3% previously. Stronger electronics production could be a key factor. Re-stocking process, new demand for parts and components for 5G implementation across the globe, as well as broadening of usage of new technologies such as IoT, AI, driverless vehicles could drive increased demand for electronics. Indeed, electronics indicators such as the growth in semiconductor equipment billings has registered the first expansion since Oct18 while semiconductor shipments have risen by a healthy 12.8% from the trough in Apr19. All these should be reflected in the industrial production figure.

Philippines: November trade numbers are due this week. Exports are expected to continue to expand, by 6.2% y/y and imports contracted by 7.3% y/y resulting in a trade deficit of USD3bn, improving slightly from USD3.3bn last month. We think imports are likely to start accelerating in 1H20 due to healthy pipeline of government infrastructure projects in addition to the extension of 2019 budget validity to 2020. As global trade is expected to remain soft this year, improving electronics manufacturing demands will support Philippines’ exports, more than half of which are electronics. In October, electronics exports grew by 7% y/y to USD3.5bn from an average of USD2.9bn in 1Q19.

Taiwan: December trade and inflation data are due this week. Exports are expected to sustain positive growth for the second consecutive month, at 2.9% YoY. The overall overseas demand conditions remain weak, as evidenced by the further decline in export orders in Nov19 (-6.6%). But onshore manufacturing activities continue to outperform – PMI picked up notably to 50.8 in Dec19 from 49.8 in the prior month, capital goods imports surged a strong 66.3% in Nov19. The bottoming-out of electronics cycle, rise in 5G demand, as well as the trade diversion effects of the China-US trade war / Japan-South Korea trade tensions, should continue to lend support to Taiwan’s exports, production and investment growth in the near term. Inflation, on the other hand, is expected to remain tame, thanks to the stable labor market conditions and the appreciating TWD offsetting higher oil prices. CPI inflation is projected to register 1.0% in Dec19 vs 0.6% in Nov19.