The outlook for SGD rates is likely to be benign, with pockets of relative value plays through 2020. There are a couple of assumptions that we are holding. Firstly, we see the Fed on pause this year with the hurdle to move in either direction set relatively high. With the market seeing an asymmetrical risk towards easing, we think that this reflects a more cautious positioning (worries on duration), rather than an outright bet that the Fed will cut. Secondly, there is a good chance that Monetary Authority of Singapore (MAS) will also stand pat after easing policy in 2019. Taken together, we think that monetary policy will be playing a more muted role in driving SGD interest rates this year.

SGD interest rates have outperformed their USD counterparts over the past few months. While we think that SGD rates can stay low in a benign environment, we are cognizant that a large part of move is probably already behind us. Notably, the spread of 2Y SGD IRS over 2Y USD IRS is now at -23bps, compared to 13bps in early September. Accordingly, we think that the market is already reflecting the better global manufacturing outlook and a thaw in China-US trade tensions. 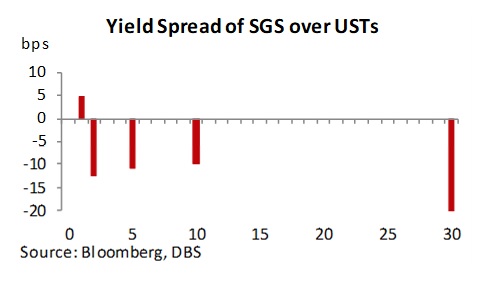 There will be opportunities when SGD liquidity gets more flush (more than what is being experienced due to current USD weakness) due to idiosyncratic factors. We think that the upcoming budget could be more generous than previous years as the government takes a fiscal tilt towards supporting the economy. For SGD rates, much would depend on the Net Investment Income/Returns contribution (NIRC) for 2020. Over the past few years, the amount of NIRC has been steadily increasing and is estimated to be around SGD 17bn (3.4% of GDP) for FY 2019. For FY 2020, the figure can be higher and should translate into an additional liquidity boost (probably staggered across several periods) later this year.

Better SGD liquidity can be expressed by SGS-swap spreads. The issuance calendar is heavily tilted towards the longer tenors (10Y and 30Y announcements due on January 21 and February 19 respectively). There is an absence of issuances for the 5Y tenor in the first five months of the year. Moreover, optional mini auctions are only scheduled for June and August. This suggests that 5Y SGS-swap spread offers the best risk-to-reward in the near term. Current SGS-swap spreads are wide ahead of upcoming longer-term issuances as bonds underperformed. However, this should reverse once the long-tenor SGS issuances are cleared in 1Q.

Longer-tenor SGS outperformance versus US Treasuries may be more interesting in 2H20. Aside from a lighter SGS longer-tenor issuance schedule, the maturity profile of SGSs (and comparables) is more favourable. Notably, there are two sizable SGS maturities, SGD 5.5bn and 8.0bn in July and September respectively. Amongst comparables (we screen only the government-linked entities, no private sector), only the SGD 1.2bn HDB bond (maturing November) stands out. Timing wise, we think that US yields may start to push meaningfully higher only in 2H. The mix of fiscal fears, US ultra-long issuances and a period of stable global growth may just be the trigger for longer-term USD rates underperformance. Under these conditions, we think that SGSs and SGD rates offer greater stability.