For 2020, we expect a modest growth recovery in growth to 3%yoy, below historical average.
Radhika Rao14 Jan 2020

The Thai economy witnessed a challenging 2019 as weak domestic catalysts met an unfavourable external environment. Delay in the government formation and underperformance in the manufacturing and export-related activities were key drags. Exports underperformance (-3%yoy vs 2018’s +8%) depressed production and manufacturing activity.

GDP grew an average 2.5%yoy in 1Q-3Q19 and a similar scale of expansion in 4Q should take full-year growth to 2.5%. Encouragingly the underlying trend i.e. MoM sequential pace is stabilizing at lows.

For 2020, we expect a modest growth recovery in growth to 3%yoy, below historical average. Dependency on private consumption and government spending to boost growth will increase into 2020.

After holding up well in 1H, consumption showed signs of strain, reflected in weak car sales, tepid farm incomes and sluggish confidence indices. To reverse this tide, the government introduced several stimulus measures in 2H19 (~0.5-1% of GDP), consisting of cash transfers to welfare card holders, promote local tourism, support local business/ SMEs, tax rebates to lift housing market, harvest subsidy and price insurances for farmers, amongst others. Regional wages are slated to rise from January 2020 by ~1.5% but slower than past years. Cumulatively, these are encouraging measures to boost disposable incomes, but a lasting lift will need stabilisation in manufacturing/ farm activity.

The government passed the FY20 (year starting Oct19) Budget this month, delayed from 3Q19. The THB3.2trn worth outlay is at a historical high, THB200bn higher vs year before. Budget deficit is projected at -2.6% of GDP. With the fiscal math within statutory limits, additional pump-priming needs can be partly accommodated within the Budget.

Private investments will require manufacturing and export activities to stabilise. Data from the Board of Investment has been encouraging. A likely benefit from trade diversion was a 69% Yoy jump in FDI applications (by value) between Jan-Sep19. Japan, China and Switzerland are the largest three investors. Two-thirds of the interests are in electronics, digital and automotive sectors. The run-rate of application approvals is catching up. On exports, low base effects are likely to prop the 2020 growth pace, but an acceleration is contingent on the resolution of trade tensions. Key sectors – auto, electronics, chemical products etc. underperformed last year. After a torrid year, electronics has hit a trough and stabilising, with recovery hinging on 5G take up, inventory restocking for consumer parts, etc.  After a soft patch until 1H19, tourist arrivals have turned around. 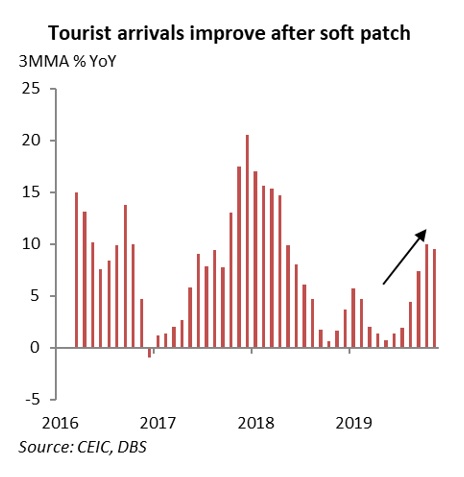 With stimulus measures including extension of visa fee waiver and promotional activity to attract more visitors, we expect an improvement in arrivals to bode well for invisibles receipts and current account balance.

Low inflation will also help boost real incomes and purchasing power. Year-to-date inflation averaged 0.7% Yoy, below the BOT’s 1-4% inflation target. For the year, we expect an average of 0.8% average, down from 2018’s 1.1%. Base effects could prop inflation 1.2% Yoy in 2020, but still near the lower end of the target, reflecting tepid demand. Supply-side forces are under watch in light of the recent escalation in the Middle East and the US, which has driven oil prices out of a stupor.

Subdued inflation and tepid growth saw the BOT on an easing bias and lowering rates by 50bps to 1.25% - a global financial crisis low – in 2019. Beyond this, policymakers will be wary of further cuts given financial stability risks and already high household leverage levels. More macroprudential curbs are likely this year, with the recent tweaks in LTV ratios a case in point. Low rates have, however, had a limited impact in reining in THB bulls.

THB outperformance, a thorn in the side of the authorities

Besides addressing growth risks, THB outperformance has been a worry for the authorities, as this is inconsistent with weak macro conditions.

Safe haven flows and a strong current account surplus pushed the Baht to be a regional outperformer this year. The currency appreciated 7% vs USD and 8% on nominal effective exchange rate, turning out to a primary worry for the BOT, as it impinges on trade competitiveness and exports. Attractiveness in Thai assets stems from a) current account surplus ~5% of GDP in 2020; b) persistent risk in reserves buffer; c) low inflation; d) foreign portfolio inflows. Rate cuts thus far has had a salutary impact on the currency, with the BOT banking on administrative measures to rein in the currency.

THB strength also bodes poorly for exporters’ revenues and trade competitiveness. A BOT study [1] revealed that a 1% strengthening of the baht against the USD increases export prices in US dollar terms by 0.3% on average, in the short-term. Further, the limited ability of manufacturers to pass costs of THB appreciation to export prices, implies that exporters will be hurt when these revenues are converted into baht. Lastly, a stronger baht squeezes corporate profits by narrowing the operating margin of export-oriented firms.

The BOT stepped up efforts to curtail the Thai baht’s strength after a brief breach above 30 to the USD. Exporters are being allowed to keep USD1mn of their proceeds abroad, a fivefold increase from the current USD200k limit. It will allow local companies and residents to keep foreign currency in the country and ease regulations for insurance companies to invest overseas. More steps to encourage outbound portfolio investments and manage gold trading flows are likely.

Past efforts to relax FX regulations and liberalise the capital account have only translated into modest rise in offshore investments. Hence, alongside educating investors on offshore opportunities, over time Thai residents are likely to follow private sector businesses who have increased their footprint in the CMLV region and the West in the past few years. The Board of Investment might propose to encourage companies to import capital goods and machinery for upcoming investments, in light of THB strength.

Beyond the policy sphere, if risk-appetite improves and safe-haven flows subside, the extent and scale of further appreciation in the THB could ease. Our DBS’ FX Analyst expects THB to end 2020 on a weaker note. According to our DBS-Effective Exchange Rate (DEER), the valuation of the Thai Baht is amongst the highest in the region, albeit when the sizeable CA balance is factored in, it does not look excessive (see here).

Thailand was not named in the January 2020 edition of the US Treasury’s currency monitoring list. Amongst other US’ trading partners, the currency manipulator label for China was reversed (seen as a symbolic gesture ahead of the Phase one trade agreement) even as it stays on the monitor list, alongside Germany, Ireland, Italy, Japan, South Korea, Malaysia, Singapore, Vietnam and Switzerland.

We had highlighted in our earlier note that even as the US had tightened its criteria, Thailand was not in breach of most pre-conditions according to its own data reporting. As the table below shows, Thailand’s sizeable current account surplus was a concern. Criticism that the BOT’s strong FX intervention had helped the THB to gain a competitive edge, stood nullified as THB led the table as a regional outperformer last year. THB and markets are likely to buoyed in the short-term on being excluded from the list. 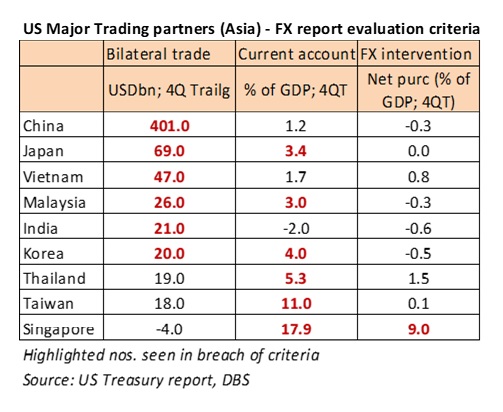 The election in March 2019 saw former Prime Minister Prayut Chan-o-cha return as the PM with a slim majority. The ruling coalition holds 259 seats vs the opposition’s 240 in the 500-seat Lower House. Of interest is the Constitutional Court ruling due on 21st January on dissolution of the Future Forward Party (FFP) over allegations that it tried to overthrow the monarchy. Concurrently, the court also accepted a petition by the Election Commission’s (EC) to decide whether the party might also be disbanded for accepting THB191mn campaign donation from its Head Thanathorn Juangroongruangkit. The opposition could stand to lose as much as 75 seats if the court rules to dissolve the FFP, the third-best performing party in the March elections. These developments will be watched closely from the perspective of political stability.