Run rate of the FY20 math suggests the 4QFY20 turnaround might be insufficient to contain slippage.
Radhika Rao15 Jan 2020

Fiscal deficit in the first eight months of FY20, stood at 15% above target, driven by weak revenues. At an aggregate level, expenditure has been in line with the budget trend. The FYTD deficit overshoot is not out of sync with past trends, as demonstrated by the accompanying chart. This is because, typically, the fiscal run-rate worsens for three-fourths of the year and then moderates in the final quarter as expenditure is scaled back and seasonal revenue flows kick-in. 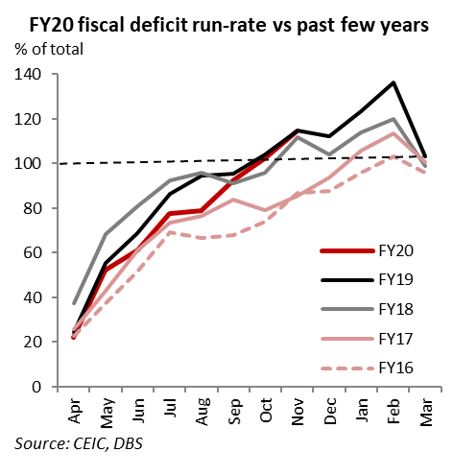 Run rate of the FY20 math, however, suggests that the 4QFY20 turnaround might be insufficient to contain a deficit slippage. 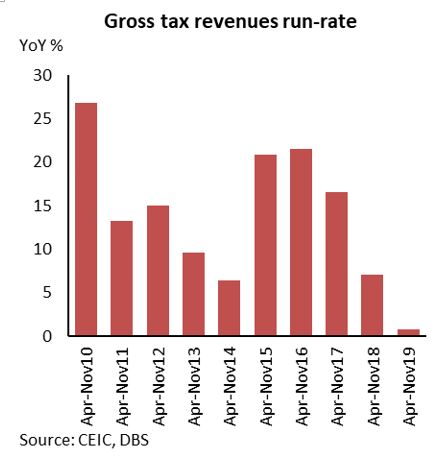 This was on account of lower indirect and direct tax collections. Indirect receipts slipped 1% YoY in first eight months of FY20, on sub-par excise, customs and centre’s GST earnings. Budgeted at INR6.6trn, GST collections totaled INR4trn (60%) in first eight months of the FY. If this run rate sustains, GST takeaways might fall short by at least INR500bn (0.2% of GDP) this year. Add to this, slow growth has also impacted corporate (-0.9% YoY as of November) and income tax receipts (7% YoY vs budgeted 17%). Impact of last year’s tax cuts will reflect with a lag, but scale of revenue foregone might be smaller than the government’s estimates.

Expectations are high for non-tax revenues to provide cushion. So far, this has comprised excess RBI’s dividends (0.25% of GDP), partial payments by telecom companies following a court ruling, and divestment proceeds. Key strategic stake sale in five PSUs announced in November were an important move, but with less than a quarter left in this fiscal year, proceeds could accrue to FY21. For FY20, by November, collections stand at INR180bn, compared to a target of INR1.05trn (0.5% of GDP). Factoring in a late push by sale of minority stakes and ETF collections, the count could improve to INR600bn, yet below target.

To accommodate this revenue shortfall, we expect expenditure to be scaled back in 4QFY20. The Department of Economic Affairs have reportedly asked departments to compress their spending to 25% of their budgeted sum in 4QFY20 vs 33% in the past few years. This might lead ministries who have underspent in early part of the year to witness sharper cuts in 2H. More savings are also likely via slower disbursements under the PM Kisan scheme, deferment in subsidy payments and delay in rolling out of sectoral measures announced in 2H19, reining in expenditure.

Netting of weak revenues and expenditure cuts against the background of an undershoot in nominal GDP, a slippage of 0.3% in the deficit target is likely in FY20. 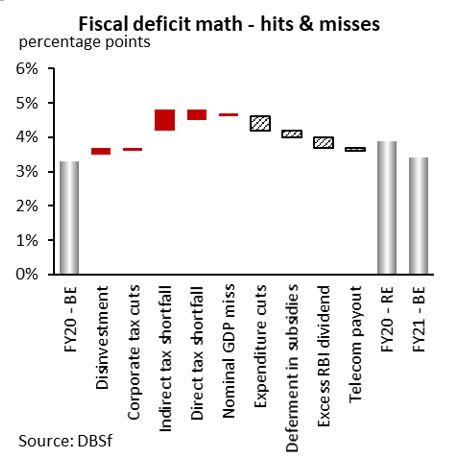 Scope for surprises – good and bad

Besides our base case scenario, there is scope for surprises – good and bad. The government remains keen to signal fiscal consolidation, in continuation to the past five years, preferring to stick with a glide path. In such a case, few options that could be explored to keep close to targets: a) additional dividends from PSUs/ RBI; b) spectrum or AGR-related payments from telecom companies; c) defer payments to the next FY, in line with accounting framework; d) sharper cutback in expenditure in 4QFY20 (~1-1.5% of GDP); e) increase in borrowings, together with collections under the saving schemes. These moves could, collectively, limit the scale of slippage. This scenario will see the deficit at -3.3-3.4% of GDP. 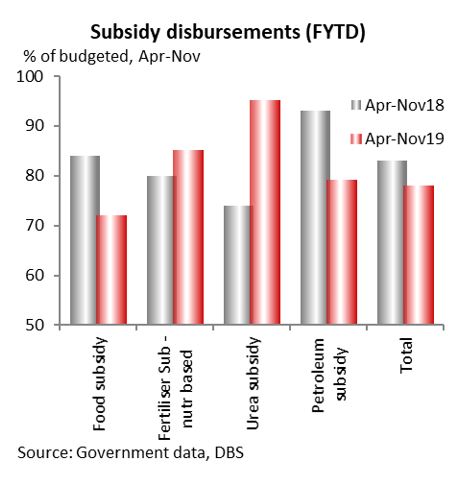 On the bearish end, flexibility accorded by the Fiscal Responsibility and Budget Management (FRBM) committee might be tapped. This allows a deficit slippage of as much as 50bps, which will leave the deficit at -3.8-3.9% of GDP. This scenario will absorb most of the revenue slippage and lower the need for aggressive spending cuts this year.

The Union Budget for FY21 will be outlined on Saturday, February 1st. Markets will keenly watch for the FY21 budgetary assumptions, particularly on revenues and nominal GDP growth. A comparison to ‘actual’ FY20 numbers (maintaining FYTD run rate for 4QFY20) will be crucial to set off the FY21 math on a credible note. Here we expect some moderation in revenue assumptions, particularly GST and direct taxes. Reliance on asset sales and non-tax revenues will rise, complemented by the already outlined pipeline of strategic sale options.

Nominal GDP in the region of 9-10% will be realistic, assuming higher deflators. We expect the fiscal deficit target to be set at -3.4% of GDP. Implementation of the task force concerning Direct Tax Code recommendations will also be of interest, with the proposals covering change in lower tax brackets and rebates, start-up tax ecosystem, revisiting the GAAR mechanism, advanced pricing agreement provisions etc.

With nominal GDP slipping below long-tenor borrowing costs, debt levels come back into view. Hence raising the nominal GDP growth rate will be crucial next year and beyond to ensure debt dynamics are manageable and external ratios as well as corporate profitability are protected.

Net borrowings were budgeted at INR4.7trn in this FY, of which INR2.7trn was in the second half i.e. October 2019 to March 2020. Slower than budgeted revenues point to the likelihood of additional borrowings this quarter, even as funds under the small saving schemes is pegged at a high of INR1.3trn (0.6% of GDP; 78% of the budget disbursed by November). With interest rates on these deposit schemes not lowered despite the falling rate environment in the economy, these schemes have attracted strong interest. Above target collections here will provide some cushion, but leave the door open to INR200-300bn add-on borrowings.

The central bank’s recent special open market operations (OMOs) are intended to correct the wide term premia (e.g. 10Y yields minus repo rate). Three tranches have been conducted since December 2019 and we expect more such buy-sell OMOs to narrow this spread. Pullback in belly-to-long tenor yields will help accommodate higher borrowings and trickle down to lower rates for the credit markets.

Concern over the overall high public borrowings persists (centre, state and public sector enterprises). Besides the centre’s bonds, states finances have been on the backfoot due to weaker collections, burden of lagged pay increases, power-related debt and rising dependency on tax revenues from the government (GST compensation, divisible pool etc.). Add to this are the PSU borrowings from across sectors, which keep combined outlays at elevated levels (see chart below). Longer-out, the economy’s savings rates, particularly households’ financial savings will have to rise to absorb this strong stock of borrowings. 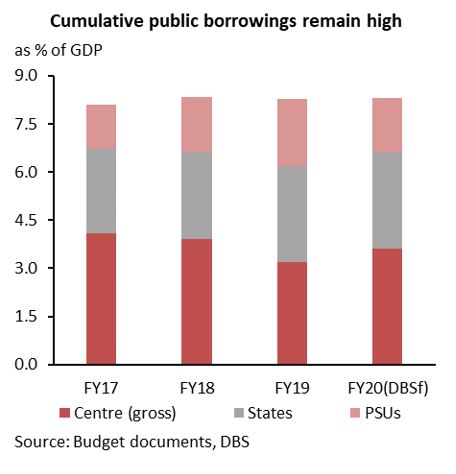 While the FY20 and FY21 fiscal math holds for the near-term, accompanying measures will be viewed via a dual lens – near and medium term, to ensure a cyclical recovery is sustained by a structural turnaround. Measures to boost demand are likely, accompanied by sectoral relief and infra push as overarching themes.

-Personal income tax changes: Following corporate tax cuts in 4Q19, speculation is high that a reduction in personal income taxes is on the cards next (see here). Combination of an increase in the basic exemption limit and/ or introduction of a differentiated tax rate structure for higher incomes might be on the cards. To cushion the impact on collections, these tweaks might be accompanied by rationalization in tax rebates.

-Rural demand push: Third installment of the PM-Kisan payouts was completed in early-January. Slow progress in identification and authentication of beneficiaries suggest that disbursements will be less than the budgeted INR870bn. Besides a renewed push towards states to update their land records, further moves to strengthen already announced farm insurance, health and pension schemes are likely.

-Sectoral focus: Considering pockets of stress in certain sectors as well as few being of strategic importance, we expect further tweaks in policies concerning the renewable sector, e-vehicles, power, affordable housing, real estate, and exports, amongst others.

-Financial markets: Expectations are high that another tranche of capital infusion into banks is on the cards, despite speculation that the banks might, instead, be asked to expedite loan recoveries and raise markets-based funding to strengthen their balance sheets. Support for non-banks will also be watched closely, especially after market chatter for a US-like Troubled Asset Relief Program (TARP) program to strengthen the domestic financial sector.

Long-standing demand for lower tax incidence on investors is likely to surface, including relief on the Securities Transaction Tax (STT) plus Long Term Capital Gains Tax (LTCG), and removal of the dividend tax, amongst others.

-Reaffirm focus on infrastructure spending: The medium-term focus on infra was spelt out in December via an ambitious National Infra Pipeline (NIP). Pegged at INR102trn (USD1.4trn) to be disbursed over the next five years. For FY21, program will be financed 39% each by the centre and states, and rest by the private sector. Initial focus will be on expediting ~42% of the projects, which are already in the implementation stage, with energy, roads and railways making up more than half of the total pipeline under consideration. More efforts to promote better risk-sharing and revitalize the PPP (public private partnerships) are likely. Further details on financing these projects, if included in the Budget, will reinforce markets’ confidence on the NIP.

-Relax medium-term fiscal consolidation target: Considering the anticipated fiscal slippage this year, we expect consolidation to be delayed beyond FY21, assuming a revival in growth and revenues.

Markets will look for improved transparency in the Budgetary announcements. Any reduction in the fiscal deficit could result in a negative credit impulse in the near-term but will need to be balanced with a credible consolidation plan further-out.