G3 interest rates will be driven by a more balanced fiscal and monetary policy mix in 2020. Last year, the mix of events and policy decisions from the major economies resulted in a massive rally across developed market govvies. Amidst a slowdown in the global electronics cycle and worsening China-US trade tensions, the Fed and European Central Bank (ECB) responded by easing monetary policy and resuming quantitative easing. The sparked a wave of competitive rate cuts across the developed world and allowed emerging market central banks to loosen policy. Taken together, the average 10Y yield for G10 economies fell by 43bps in 2019.

2020 is likely to pan out differently. Firstly, we expect G3 central banks to be on hold amidst a nascent recovery in the global electronics / manufacturing cycle. We suspect that the hurdle for the Fed to move is set relatively high. It would take a much sharper slowdown to prompt a cut. Similarly, we think that the Fed will look though firm data to run the economy hot. Meanwhile, the ECB is already running QE but there are growing worries that overly low rates may hurt the economy. Tweaks in monetary policy resulted in Euribors drifting higher since September. ECB Chief, Lagarde, is also a proponent for greater fiscal spending in the countries that can afford it. Lastly, the Bank of Japan (BOJ) has been tapering bond purchases as it targets a -0.2-0.2% range for 10Y JGB yields. Overall G3 asset purchases are set to fall after the recent burst from the Fed to deal with the repo tantrums.

With monetary policy set to take a backseat, DM rates will be driven by fiscal and growth dynamics. In this first-of-three piece, we examine the US fiscal dynamics.

Within the G3 economies, the US has been and will likely continue to be the most accommodative on the fiscal front. While the budget balances have been generally narrowing for the Eurozone and Japan since the global financial crisis (2008/09), the budget deficit topped out at 2.6% of GDP in 2015 and has since widened to 4.7% in 2019. Comparatively, the Eurozone and Japan ran deficits of 0.5% and 5.5% of GDP respectively. It is perhaps unsurprising that the US, with its healthier mix of fiscal and monetary stimuli (from rate cuts in 2019), fared much better on the growth front than the Eurozone and Japan which have an asymmetrical tilt towards monetary easing.

Trump’s tax cuts are why the budget deficit widened dramatically despite a firm economy. Corporate tax collections are still significantly down from peak given the lower tax rates, curtailing revenue 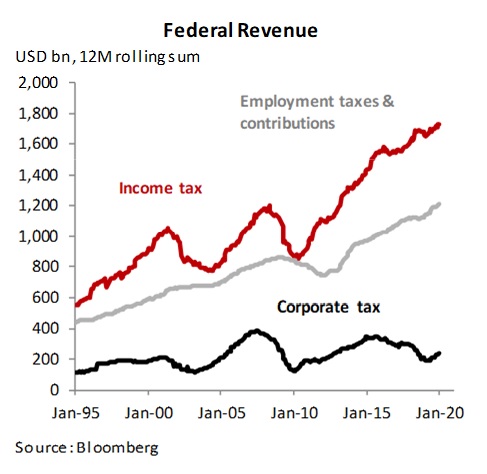 growth. On a rolling 12 months basis, revenues grew by just 3.9% over the past three years. Meanwhile, expenditure growth (largely driven by increasing transfer payments) outpaced at 7.3% over the same period. We reckon that the detrimental effects of the tax cuts have already fully filtered into the revenue numbers. More importantly, Tax cuts 2.0 is unlikely to materialize. The likelihood will rise marginally if Trump wins a second term. However, if Congress remains held by the Democrats, it would be close to impossible for another round of tax cuts to go through. Consensus and the CBO expects the budget deficit to hover around current levels for the coming two years. In this sense, the fiscal stance remains accommodative (deficit widest in a decade) but is not going to get meaningfully looser. 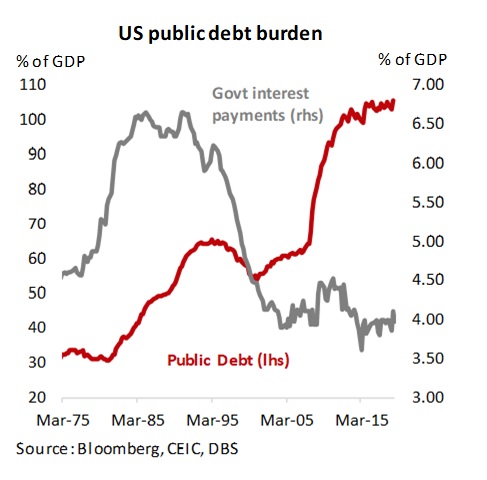 Concerns about debt sustainability are overblown even as the amount of public debt hovers around 100% of GDP. To be sure, this figure was much lower prior to the Global Financial Crisis (around 60% of GDP) and closer to 50% in the mid-1980s. However, USD interest rates were much higher during those periods. Over the past 50 years, the debt burden (calculated government interest payments as a percentage of GDP) was highest in the late 1980s / early 1990s (around 6.5% of GDP). Currently, with 30Y yields barely above 2.2%, the debt burden is just about 4% of GDP. 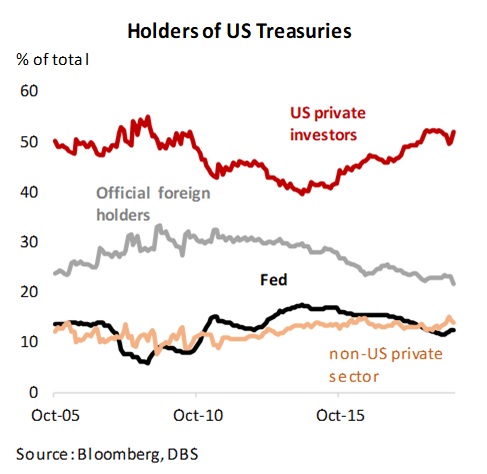 We think private investors will be able to digest UST issuances that commensurate with a federal deficit of 4.5-5.0% of GDP. By some measures, the mix of investors (more private, less public) suggests that yields should be higher. As the US stages steady growth over the past decade, the Fed’s ownership share of USTs has fallen. Interesting, official foreign holdings (central banks) have also fallen proportionally. Private investors (US and foreign) have taken up the slack with the ownership share reaching highs seen in 2008/09. Theoretically, we would expect private investors (who are not captive buyers) to demand higher yields. However, against a backdrop where yields are relatively high compared to G10 peers, there are no alternatives.

The prospect of more long-dated issuances suggests that larger premiums have to be built into the 10Y and 30Y Treasuries. The announcement that the US will issue 20Y bonds in 1H20 marks a tentative first step into the ultra-long tenors. By avoiding the 50Y tenor (for now), there should be little disruptions to market participants who are familiar with tenors out to the 30Y segment. If the 20Y USTs see decent demand and long-end rates stay depressed, there would be an increasing chance that 50Y issuances (which was mooted and shelfed in 2017) will appear. On balance, we are wary of long duration and prefer to express our view via tactical steepeners (2Y/30Y, 5Y/30Y) to avoid taking a directional view on rates. 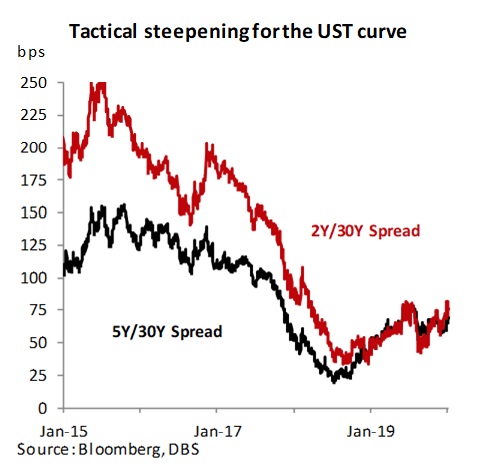