Hong Kong, as a world class international metropolitan, is positioned as the ‘core-of-the-core’ within the GBA, in our view.
Nathan Chow, Samuel Tse07 Mar 2019 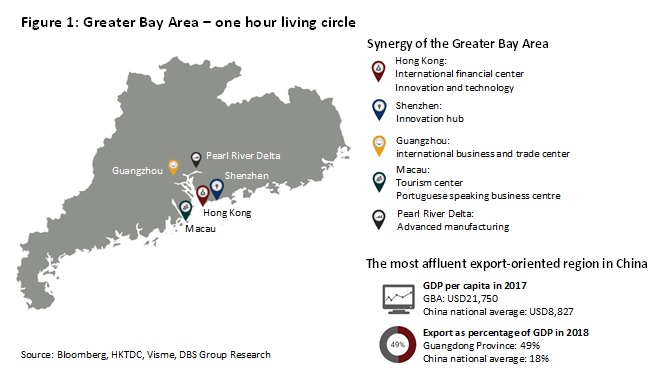 The Greater Bay Area is a combination of 9+2 cities (Hong Kong and Macau, plus Guangzhou, Shenzhen, Dongguan, Foshan, Huizhou, Jiangmen, Zhaoqing, Zhongshan, and Zhuhai) in Peral River Delta (PRD), the heart of the South China according to Deng Xiao Ping’s Open-Door Policy Plan 40 years ago. In terms of economic size, GBA is already on par with other major bay areas (Table 1). By 2035, the region will be developed as a well-connected Tier 1 bay area, according to the recently announced blueprint. 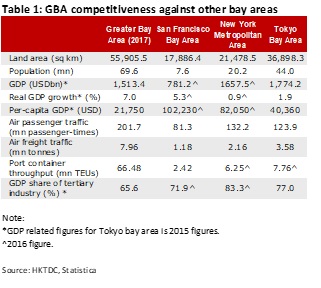 Hong Kong, Shenzhen, Guangzhou, and Macau are confirmed as the four core cities. The ultimate goal is to provide support for the implementation of the “Belt and Road” initiative (table 2):

• Shenzhen: Accelerate its internationalization and urban modernization and continue its role as a major innovation hub for the region.

• Guangzhou: Serve as an international business trade center and integrated transportation hub, and to cultivate science and technology education

• Macau: Promote business cooperation with Portuguese-speaking countries as an example of a multicultural Chinese city. Hong Kong, as a world class international metropolitan, is positioned as the ‘core-of-the-core’ within the GBA, in our view. Infrastructure upgrading is in full swing. The Hong Kong-Zhuhai-Macao Bridge began operation on Oct18 has greatly shortened the distance between Hong Kong and the western PRD. A high-speed rail link has also been launched, connecting the city with the 25,000km National High-Speed Rail. Institutional connectivity will also be deepened:

Tremendous opportunities are ready for Hong Kong to thrive on. We have identified eight sectors under the financial and technology industries that will be benefited particularly from the synergies and opportunities brought by the GBA initiative:

• Asset and wealth management: Aside from Hong Kong and Macau, the nine cities in the GBA account for 85% of the Guangdong’s economic output. Guangdong leads the country in provincial GDP volume, exceeding Australia's 2017 GDP. Its per capita disposable income has surged 130% over the past decade. The growing wealth is fueling huge demand for wealth management products and services, especially among high-net-worth individuals. And the rapidly expanding middle class is prodigious at saving. The meagre social safety net makes it imperative to stash money for retirement, education, and healthcare. Meanwhile, demand for overseas investments is strong due to lower risk-adjusted yields of onshore assets and rising needs for currency risk diversification.

On the regulatory front, the government’s deleveraging campaign has prohibited banks from guaranteeing investors against losses. The resulting outflow of AUM from bank WMPs will provide structural opportunities for asset managers.

• New economy listings: With innovative sectors booming in China, the capital market in Hong Kong is well-positioned to capitalize on this growing trend. Already, steps have been taken last year by the HKEX to attract listings of new economy companies. That include allowing dual-class shares for the first time as well as an initiative encouraging pre-revenue biotech companies to list. Smartphone giant Xiaomi's eventual USD5.4bn IPO in July 2018 was followed by the USD4.2bn IPO of Meituan Dianping, a leading Chinese e-commerce platform for services. They are the two largest IPOs for Chinese private technology companies in Hong Kong's history. Leading biotech companies, including BeiGene and Innovent, also took advantage of the new rules to list on the HKEx.

More reforms are in the pipeline: the trading of companies with dual-class share structures through the Stock Connect programs will likely be promulgated in mid-2019; some Chinese tech firms are reportedly lobbying the HKEX for allowing companies to hold super-voting rights. These potential changes may help accelerate the development and growth of emerging and innovative sectors in the GBA.

• Green financing: The blueprint has outlined GBA’s development directions for prioritizing ecology and pursuing green development. Green bonds, green vehicles, and green energy have been featured. Various industries are currently present in the GBA ranging from petrochemicals to automotive manufacturing. The stringent environment requirements will necessitate a substantial upgrading of facilities. The enormous need for green financing will add momentum to the burgeoning Hong Kong’s green market. USD11bn of green bonds, of which USD7bn was originated from mainland entities, were issued in Hong Kong last year (up 237% YoY) (Chart 1). In particular, Tianjin Rail Transit Group and Beijing Capital Polaris Investment Company Limited issued green bonds denominated in foreign currencies, which may be used to finance their offshore green investments. Given the depth of Hong Kong’s forex market, Chinese issuers can enjoy more favorable terms for their non RMB-denominated green bond issuance. Looking forward, the possible launch of Southbound trading under Bond Connect will widen the investor base in Hong Kong. The creation of green bond indices and ETFs could also facilitate capital flows into the green bond space. In addition, HKEX is considering introducing a dedicated green bond segment displaying internationally-compliant Chinese green bonds. As such, Investors can efficiently discover securities which address environmental issues in the GBA.

• Offshore RMB business: GBA aims to be a pilot region to achieve freedom of capital movement. According to the outline, banking institutions in the GBA may launch, in accordance with relevant regulations, cross-boundary RMB interbank lending, RMB foreign exchange spot and forward businesses, related RMB derivative products and cross-distribution of wealth management products. Over time, we expect the RMB flows to proliferate from treasury management into RMB project financing driven by large-scale infrastructure projects such as highways and sewage treatment plants.

Hong Kong may leverage its role as the global offshore RMB hub to drive mutually beneficial growth across the region. The city has the world's largest RMB liquidity pool outside the mainland and provides the widest variety of offshore RMB investment products. According to SWIFT, Hong Kong handled over 70% of the world's offshore RMB transactions in 2017. In 2018, Hong Kong's RMB Real Time Gross Settlement system recorded a high volume of turnover, averaging more than RMB1,000bn per day, indicating that the RMB liquidity pool in the city continued to support vibrant RMB financial intermediary activities.

• Cross-border capital flow: Deepening the connection of capital markets within the region is crucial for the GBA development. The Stock Connect schemes, Bond Connect, and Mutual Fund Recognition have laid the foundations for further loosening of regulations. Statistics reveal that there are 458 SZSE-listed companies in the GBA, accounting for more than 80% of the total publicly traded companies in the region. Further expansion of the connect schemes will greatly enhance the access of the capital markets in the GBA.

• Technology and innovation: With opportunities brought by the GBA, Hong Kong will further capitalize on its advantages in R&D capabilities and technological infrastructure. Some 2000 potential unicorns, which hired over 5000 employees, are incubated locally. Hong Kong’s innovation and technology sector together with that of Shenzhen – the Shenzhen-Hong Kong technology cluster -- ranked the world’s second largest based on the Global Innovation Index 2018 (Table 3). According to the latest budget, the HKSARG will invest over HKD40bn into the technology sector (Table 4). R&D expenditure/GDP is expected to double in five years. Biotechnology, artificial intelligence, smart city and financial technologies were identified as the four areas of strength for development. The Hong Kong-Shenzhen Innovation and Technology Park will be set up at the 87-hectare Lok Ma Chau Loop. This will be the largest ever innovation and technology platform in Hong Kong. All these laid a rock-solid foundation for the GBA to become the Silicon Valley of the East.

According to the Plan, the bandwidth capacity of broadband internet among Guangdong, Hong Kong and Macau will be expanded and adopt the next generation network based on Internet Protocol version 6 (IPv6). Also, the authorities target to achieve full coverage of free high-speed wireless hotspots and full fiber access for the provision of fixed broadband services. The three local governments will also explore the establishment of common standards, possibility of open-data ports and interconnected public application platforms, mutual recognition of electronic signature certificates. Data roaming and long-distance call charges will eventually be removed. Coupled with the growing tech industry within the region, the information infrastructure advancement will enable tremendous civilian application. This could deepen the integration within the GBA, particularly in the area of transportation and medical services.

According to the Smart City Blueprint of the Hong Kong Government, the city will upgrade its transportation system: e.g. Develop "in-vehicle units" (IVUs) which allows driver to receive real-time traffic information transmitted by 1200 traffic detectors. IVUs users will also be able to pay tunnel fees by remote means. The 5G technology will facilitate trials of autonomous vehicles. The Hong Kong International Airport is set to develop as Smart Airport, which could enable facial biometrics technology including at check-in, boarding pass checkpoint and boarding. Also, the Hong Kong Hospital Authority will continue to develop its Electronic Health Record Sharing System and Big Data Analytics Platform. Further integration within the GBA in these two areas will provide a better living standard.

Instead of rebuilding a low-value added supply chain, the industrial sector of the city set up plants with advanced manufacturing technology. For instance, a new environmental-friendly textile factory started operation in Taipo Industrial Estate constantly producing over 3 tons of textile per day by advanced automation. Furthermore, the Hong Kong Research Institute of Textiles and Apparel (HKRITA) developed an AI to analyze the market trend for a more precise inventory management. In the field of food production, a local corporation increased the monthly output of vegetable to over 200 tons by using the Aquaponics technique, automated machinery, and big data production system. All these will enable the city to re-build the brand of ‘Made in Hong Kong” by adopting the so-called ‘Industry 4.0’ (cyber-physical systems, the Internet of things, cloud computing and cognitive computing). In addition, Hong Kong can also develop its IP (intellectual property) protection industry. Innovations in the GBA could be protected by Hong Kong’s world-class legal system. 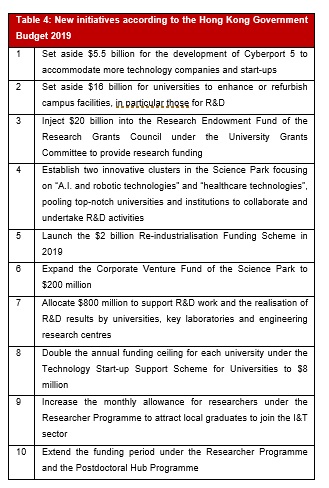