We visited our Shanghai clients last week while the NPC was in session. Discussions over the Sino-US trade war are plenty. Other area of interests includes the exchange rate and resultant impact of accommodative fiscal/monetary policy on growth outlook.

Trade war: Clients widely believe the China-US tensions will continue. While a trade deal between the two countries seems to be within reach, the hope is dim to negotiate a resolution on thorny structural issues spanning from abolishment of state subsidies and cybertheft. Many expect the Trump administration will keep most of the tariffs in place to maintain leverage. Fully removing the levies will only happen in years ahead when China fulfils completely to their demands.

Meanwhile, the trade dispute has already driven long term relocation of supply chain to diversify risks. Some manufacturers have moved part of their production to other lower-cost countries in south-east Asia. For firms that depend on high-tech manufacturing, the decision is rather complicated because it is not easy to find another country equivalent in scale, efficiency and convenience to substitute China.

Growth outlook: Trade dispute aside, the weakening in global demand is another concern. The slowdown in Europe is particularly worrying. On domestic front, many see continued moderation in business growth in January and February. The automotive industry, for instance, is counting on sentiment improvement to revive revenue growth momentum.

The ninth consecutive monthly fall in car sales has prompted automakers to offer discounts and cheap loans. But demand from buyers has been dented by improved public transport, the rise of ride-sharing services, and a wave of defaults in P2P lending (which accounted for 10% of car purchases). The effectiveness of potential government measures will likely be limited by car ownership hitting saturation point in some cities. Some were upbeat about business, especially those in daily goods and services sectors. There are three major evolving trends: 1) revenue generated from millennials have been rising notably particularly in lower-tier cities; 2) consumers in tier 1 and tier 2 cities have become more price-conscious; and 3) consumption demand has shifted gradually from goods consumption to services consumption such as education, health care and entertainment. In fact, Chart 1 shows services consumption have held up relatively well despite weakening headline retail sales.

Inflation outlook: Some have begun expressing concerns over looming deflation risks due to faltering demand and falling commodity prices. This resonates with our earlier findings (see “China: Disinflation is back”, 10 January 2019). On monthly basis, producer prices fell straight in the past three months. High base effect will start kicking in May, the likelihood of PPI on year dipping into negative turf is high. Sliding factory prices erode corporate profits, push up real interest rates (Chart 2), and weaken the debt repayment ability of indebted companies. Lower upstream prices in turn feed into weaker prices of consumer goods. This is evident in the slowing momentum of core CPI. 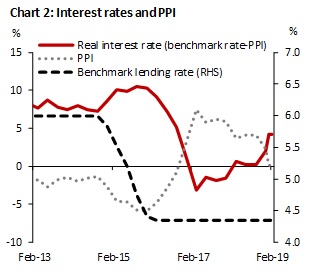 Monetary condition: Clients agree liquidity conditions have improved notably since late-2018. Monetary easing measures (Table 1) indeed drove rates down in general. We are however wary of putting too much weight on this given our clients were mainly cash-rich large MNCs. It may not reflect the true liquidity situation of other type of enterprises.

Arguably, confidence in domestic market is still soft. Risk appetite has remained weak in the financial sector. Tight funding conditions for smaller companies have not materially improved. That explains the divergent PMI figures. In February, PMI for large firms rose to 51.5 whereas those for small and medium-sized firms slumped to 46.9 and 45.3 respectively (Chart 3). The sharp fall in lending last month points to further weakness ahead.

Continued monetary easing is warranted. Policy focus will remain on unclogging lending channels. At the start of the NPC last week, the government has set a mandatory target for commercial banks to increase lending to small companies by 30%. It was the first time Beijing has announced a specific target for loans to small companies in its annual work report. 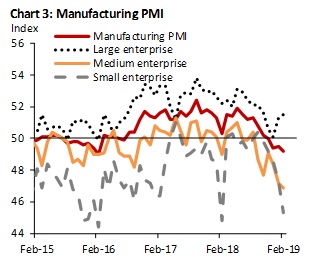 Fiscal stimulus: Clients in general are positive about the tax cuts announced last week. According to Premier Li, the 16% VAT rate applying to the manufacturing sector will be lowered to 13%. Likewise, VAT for transportation and construction industries will also be cut to 9% from 10%. In order to better cradle small technology companies, the threshold for application of the VAT will be uplifted to RMB100,000 from RMB30,000. Total tax and fee cuts are projected to exceed RMB2tn.

Indeed, empirical research (Cai, Chen, and Wang; 2018) concludes lower taxes improve both the quantity and quality of innovation investment, especially on financially constrained enterprises. The effectiveness of tax initiatives will be felt more this round on the back of more vigorous tax collection.

The economic ills have been asymmetrically felt more on the manufacturing sector with high export exposure. To this group, the call for more tax rebates are logically. However, the Chinese government will unlikely permit weakening of the currency to aid exporters. The US and China has already reached a consensus to avoid “competitive devaluation of the exchange rate” revealed by the PBoC during the NPC session last week.