Chart of the week: Trade wars have yet to alter global investment dynamic

FDI fell to the lowest seen in decade. The ongoing China-US trade frictions will likely exacerbate the trend, yet China remains to be the most robust recipient indicating positive investor sentiment.
Masyita Crystallin13 May 2019

OECD data show that global FDI fell to 1.5% of GDP last year, lowest seen in decades. A weakening tech cycle, lowering of growth expectations in the G3, and a rise in economic nationalism may all have contributed to this outcome. The ongoing China-US trade frictions will likely exacerbate the trend. Unsurprisingly, the country with the most robust net FDI track record has been China, although as Chinese companies have begun investing outside, the net figure has declined. In contrast, net FDI to EU has been virtually non-existent, with inward FDI’s almost always being exceeded by outward investment flows. The US has also had an ordinary net FDI track record, although there has been some improvement in the trend since 2015. The picture is most interesting when the data are isolated to gross inward flows. This series reveals the sentiment of foreign investors toward an economy. This again underscores robust flows to China in more than a decade. Strikingly, despite historic tax cuts and incentives, inward FDI to the US has weakened the last two years. 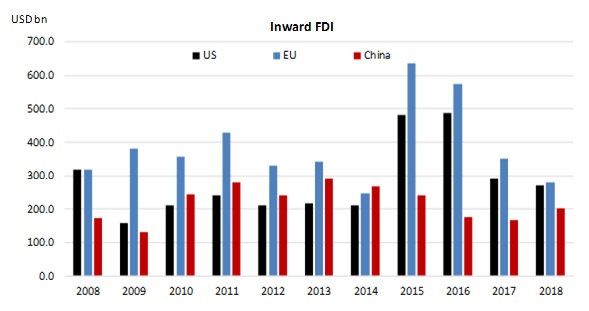 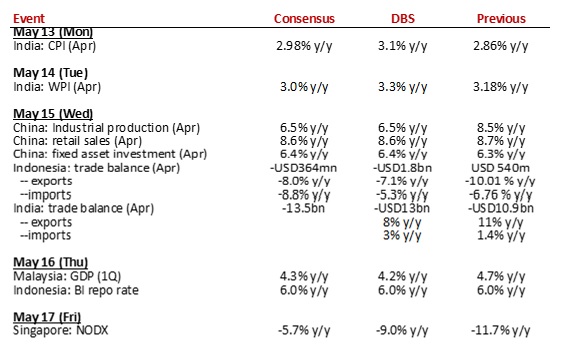 China: Domestic demand is expected to ease in April as suggested by early indicators. The NBS Manufacturing PMI dropped to 50.1 from 50.5 in March. Retail sales and industrial production growth should have softened to 8.6% and 6.5% YOY in April from 8.7% and 8.5% in March respectively. On a contrary, fixed asset investment growth is forecasted to edge up to 6.4% from 6.3% on the back of accommodative monetary policy and fiscal support. PBoC extended CNY267.4 bn to commercial banks in April via its targeted medium-term lending facility (TMLF) for channelling funding to sectors in greater demand for funding (i.e. private enterprises, SMEs). Looking ahead, the consumption sentiment and industrial activities will continue to be cloudy due to external uncertainties. More stimulus policy, especially on the monetary front, such as further cut in reserved required ratio is still on the card.

India: We head into a data-heavy week for India, with much focus on today's inflation outcome. High-frequency data for retail food/ staples show that prices are bottoming out and inching up, including vegetables and pulses. Crude prices have also rebounded, adding to the related segments. This should see inflation at 3.1% YoY in April, after averaging 3.5% in the last FY. Core inflation likely remained around the 5% mark. WPI inflation is seen at a slightly higher 3.3% YoY. April trade deficit is meanwhile likely to widen to USD13bn on a higher energy bill and slight pullback in export growth.

Indonesia: Trade data are on tap this week. In line with regional trend, exports and imports are likely to remain weak. Trade balance might switch back to deficit territory this month from two-months of consecutive surplus. Current account deficit narrowed in 1Q to -2.6% of GDP from -3.6% of GDP in 4Q18, mainly driven by improvement in the goods trade balance, while services trade balance and income balance deteriorated slightly. This narrower deficit is also in line with moderate 1Q GDP growth of 5.1% from 5.2% in 4Q18. Yet, we think the CAD is likely to widen in 2Q19 on wards as infrastructure development would start ramping of after the election, in addition to the rising oil price and re-escalation of US-China trade war which will impact Asia’s trade negatively. Despite the low inflation environment, BI might refrain from cutting policy rate at this week policy meeting as GDP growth has remained robust compared to the deeper slowdown observed all over Asia, while Rupiah could remain under pressure as US-China trade tension escalates and CAD widens.

Malaysia: GDP growth figures for 1Q19 is on tap this week and expectation is certainly skewed to the downside. The headline number is projected to print 4.2% YoY, down from 4.7% previous. The outcome will also fall short of the official full year GDP forecast range of 4.3-4.8%.

The main drag will likely come from the external front. Like in many emerging Asian economies, export and industrial output growth have dipped in recent months. This can be attributed to the trade tension between the US and China, and a broad-based slowdown in global demand. Malaysia will be no exception. Furthermore, investment could remain weak. Business loan growth has peaked and is seen declining. Imports of capital goods, a proxy for investment demand, has continued to contract since Sep19, averaging -11.5% in the past six months. These points to a subdued outlook for domestic investment growth.

Consumption growth could hold up, but the outlook is less than sanguine. Although retail sale growth has remained in double digit pace, much thanks to the zero-rating of the GST in mid last year, consumer sentiments appeared to have peaked and trending lower. Indeed, this could explain why Bank Negara has cut the Overnight Policy Rate (OPR) by 25bps recently. We view this as a pre-emptive move to guard against the downside risk to growth. Full year GDP growth is expected to register 4.5%, down from 4.7% previously.

Singapore: Non-oil domestic exports for April is expected to remain in the red. The headline number due late this week is projected to shrink by 9.0% YoY. While this is a marginal improvement from a deeper decline (-11.7%) in the previous month, it underscores the point that external headwinds have been strong, and that export outlook remained grim. While we expect a gradual improvement in the coming months on account of a still sanguine growth in the US and policy driven impetus from China, the latest spat of trade disputes between the two global giants has once again cast a deep shadow on export performance.

Both are key export markets for Singapore. No doubt any further tariff hikes will cause more pain on trade dependent countries like Singapore in the near term, but this could also mean there will be even more impetus for companies to divert trade from China to ASEAN, as well as to reshuffle their supply chains to the region in the mid to longer term. That is, greater uncertainties between the US and China will create even more impetus for global and Chinese companies to diversify their sources and investment towards Southeast Asia. And Singapore could benefit indirectly if it is able to position itself well.