India’s government debt markets have endured a lukewarm start to the fiscal year.The central bank’s accommodative policy (50bps cut in 2019) has not meaningfully lowered yields. After easing modestly in the March 2019 quarter, 2Y yields have been largely flat into FY20 (April - May to date). 10Y yields are higher than in January and consolidative-to-higher since April.

Election-related uncertainty and a liquidity shortage that began last year are keeping debt investors on tenterhooks. Underlying worries revolve around nervousness over election results, risks of a return to fiscal populism, and thereby higher borrowings. April-May are seasonal favourable months for domestic liquidity, but the situation this year is aggravated by ongoing elections, which has led to higher government cash balances with the RBI, due to a delay in fiscal spending and higher cash in circulation. These leakages coupled with front-loading of the centre’s borrowing problems have magnified systemic deficit. The RBI has stepped in to ease conditions through OMOs in May and two tranches of FX swaps, but these have fallen short in injecting durable liquidity. 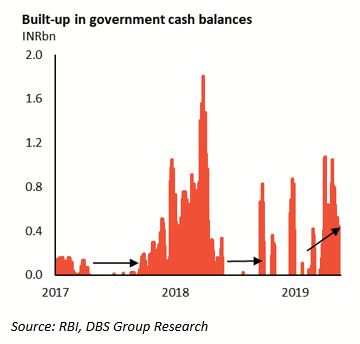 Concerns over non-bank finance companies are also spilling over into the credit space. Non-banks face an overhang of rating downgrades, higher cost of borrowings and narrower pool of funding channels.While authorities have largely focused on fixing the liquidity needs in the last two quarters, we remain concerned that an upcoming regulatory overhaul could cause further strain in the sector.

What’s next? Post-elections, we expect the seasonal forces to kick in and provide some liquidity respite to sovereign and corporate bond yields. The RBI also plans to address this squeeze, with a mix of OMOs, FX swaps and other regular operations. These might provide a window for borrowing costs to cool-off between June to August, before supply worries reassert themselves.For now, we expect the long-end of the yield curve to stay supported, while rate cut expectations are fully in the price of short-to-the belly of the curve.

First up, we explore the supply dynamics. FY20 gross borrowings are expected to increase by a third to a record high, largely due to a jump in redemptions. Total net borrowings by the centre is budgeted at INR4.23trn in FY20, steady from year before. The full year/ final budget due to be tabled in June or July, will also be watched closely for signs of a further increase in deficit targets and thereby borrowings. 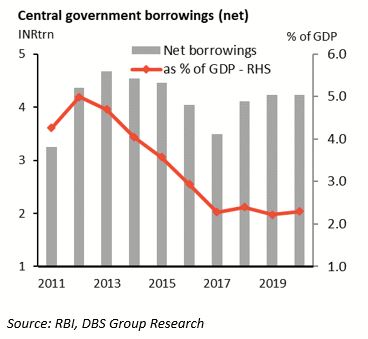 While there was marginal execution slippage in the interim budget, a bigger miss is likely amongst states. Latest available data for FY19 points to a likely 30-40bps overshoot vs budgeted 2.6% of GDP. The likelihood of pre-election spending alongside other populist disbursements might keep the FY20 deficit high at 2.8-3.0% this year. Having financed over 90% of their fiscal deficit through market borrowings in FY18 [1], this year’s cumulative issuance i.e. centre plus states, is likely to be closer to INR8trn from an estimated INR7.8trn last year.

A third element in this mix is a rise in borrowings that are raised by public sector companies (PSUs). These liabilities are kept outside the official budgetary calculations. We highlight the main sectoral borrowings in the table below. This ~INR1.8trn liability, put atop the INR4.2trn centre’s issuances and a similar-sized state debt, adds to the supply and increases contingent pressure on the fiscal math, even if maintained off-books. Hopes pinned on an improvement in demand conditions

Demand conditions need to be robust to absorb this supply pipeline. After a challenging FY19, it is not surprising that investors are eyeing FY20 with trepidation.

Last year’s issuance received a big hand from the central bank, through open market operations worth INR3trn. This accounted for about two-thirds of the net borrowings. As the chart below shows, the RBI’s presence helped to stabilise markets, just as the dominant player i.e. commercial banks remained on the sidelines, weighed by asset quality concerns, worry over fiscal math and liquidity needs. 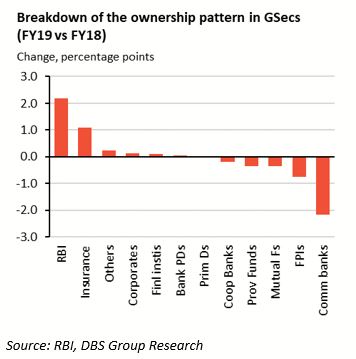 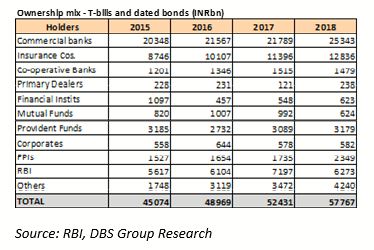 For FY20, the demand mix is likely to require support from the key participant – commercial banks, after a lacklustre FY19. Banks had bought a strong INR3trn worth bonds in FY18, before net purchases moderated sharply to INR830bn by December 2018. Holdings are expected to improve by INR1-1.5trn this year.

We remain mindful that demand from banks is likely to continue moderating over the next few years. Two developments warrant attention. Firstly, the Statutory Liquidity Ratio (SLR) has been falling, from a high of 25% in 2010 to 19.25% this quarter and set to fall to 18% by March 2020. While banks routinely hold more than is mandated, these excess holdings are on the wane. Concurrently, in a bid to harmonise banks’ overall liquidity requirements, the RBI has permitted banks to count a part of the securities held as SLR towards the other reserve requirement i.e. Liquidity Coverage Ratio (LCR); net-net lowering cumulative demand for bonds. Secondly, a pick-up in the incremental credit-deposit ratio has prompted banks to reduce securities held as SLR, to make funds available to meet credit demand. In this context, total net demand and time liabilities is also growing at a slower pace than before, likely to rein in the captive investment demand for bonds from banks, over the coming years.

From a net seller in FY18, the RBI stepped up bond purchases in FY19, providing much-required support for the bond markets. We expect this to persist in FY20 with net buys to rise to ~INR1.5-1.8trn. Any shortfall in banks’ purchases through the course of the year is likely to see the central bank pick the slack as was the case in FY19. Simmering concerns over non-banks’ health might also impact interest in the government bond space, underscoring the need for the central bank to step in, if required.

Foreign portfolio investments are expected to improve, which will hinge on the global risk uptake. The FPI investment limit was raised for FY20, as scheduled, to 6% of outstanding issuance of government bonds, from 5.5% in FY19. While this ceiling has been raised, utilisation levels of existing limits are low – from about 90% in FY18 to less than 65% in FY19 (see table).

The special window of Voluntary Retention Route (VRR) was also introduced to attract interests into the government and corporate papers. By April, VRR limits for the sovereign debt was unutilised whilst half of the corporate limit was taken up. While FPI inflows into debt have fallen in FY20 (April-May), we are hopeful that full-year flows might return to black (~INR700-800bn) if risk sentiments stabilise and the June-July’s Budget does not carry further spending commitments or put the budget deficit target of -3.4% of GDP, at risk.

Finally, the longer-term/real investors i.e. insurance companies and provident funds are also expected to play a supportive role. As evident in the past two-three years, these segments have actively rotated between government bonds and state development loans (SDLs), depending on their relative attractiveness. Given the long-term investment requirements of insurance companies, for example, demand is concentrated on the long end of the bond curve. Cognizant of these interests, the borrowing program for first half of FY20 carries an increase in issuance of 15Y to 24Y papers, with a likelihood the maturity buckets might be elongated in subsequent borrowing plans. Cumulatively, these players are expected to contribute ~INR4trn inflows.

To counter any adverse impact on bond yields or shortfall (and as a last resort), part of the borrowing might also be shifted to National Small Savings Fund (NSSF) and small saving schemes, as was the case in FY19. The FY20 Budget plans to borrow INR1.5trn from the NSSF and small savings.

There are risks to our assumptions, key amongst which are: a) hung parliament outcome, post-elections or incumbent government fares poorly; b) final budget tabled in June/July further delays fiscal consolidation and raises borrowings; c) the central bank’s rate-cutting cycle is scuppered by a rise in oil prices and/ inflation spike; d) weak global sentiments hurt FPI interests.

Against this backdrop, we expect India’s 10Y bond yields to rise to 7.5% (generic) and consolidate around these levels as the year wears on. A spike (towards 7.75% and above) is likely if any of the risk scenarios pan-out. The short end of the curve (2Y) has already priced in a dovish central bank, with rates likely to move up towards 6.9-7% as oil prices rebound and inflation recovers from the trough, despite weak growth indicators. We have pencilled in one cut in June/ August, before policy rates plateau. Any curve steepening risks will be led by the long end of the yield curve.

Beyond near-term price action, more sustained support is required, which includes reassessing the current liquidity framework (shift from neutral to surplus stance), widen the scope of participation of portfolio investors, amongst others. Longer-out, the key structural change is to lower centre/ state and contingent liabilities along with improving the expenditure mix, geared towards higher capex spending rather than revenue expenditure. Lower deficit will help address the bond markets’ vulnerability to global risk moves, reliance on external resources and prevent crowding out of private sector interests.