The European parliamentary elections are due between May 23 to 26th. Eurosceptic parties are expected to expand their footprint, which will put austerity and integration policies at risk.
Radhika Rao22 May 2019

Political risks will upend economics this year. Besides the French government facing pressure to ease austerity measures and Brexit developments drew attention in 1Q, a renewed face-off between the EU authorities and Italian government, over adherence to fiscal rules, brews in the horizon. Add to this, the European elections will commence on Thursday this week, with results due on May 26.

Why do the European parliamentary elections matter?

Held once in five years and considered the only world’s trans-national assembly, the European Parliament (EP) represents the interests of EU citizens at the European level [1]. The countries are represented through elected members of the European Parliament (MEPs), with all member states given proportional representation. While the notion is that these polls are fought on European politics, the fight is largely driven by domestic considerations.

MEPs are elected by country, but these members align/ sit in political groups based on a shared platform and identity. There are eight such groups in the current Parliament.

This election is routinely a low-key affair, with low rates of participation. But this year’s voting has grabbed attention as anti-establishment parties are expected to expand their footprint. This follows fair-right parties making big gains in the domestic elections, including Germany and Italy.

While the risk of these parties forming a majority is slim (considering ideological differences between them), a bigger voice to them could come at the cost of the two largest and mainstream camps – centre-right European People’s Party and centre-left European Socialist Party. A more dominant presence of far-right parties could fragment the parliament and put EU austerity/ integration policies at risk. Key policy proposals put forth by the European Commission, will also require the cooperation of the EP, where arriving at a consensus with anti-establishment factions could prove to be a tall order.

The table below highlights a likely shift in the make up of the European Parliament, as captured by the latest Politico Poll of Polls analysis. 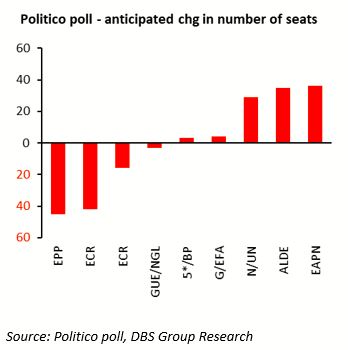 Anticipating the UK to exit the union by March 2019, its seats were redistributed amongst the other EU members. But a delay in the deadline to October and lower likelihood of a deal in the interim, will see the UK participate in the week’s election. A similar anti-establishment wave is likely here as well, as the Brexit Party leads the tally, followed by Labour and then the ruling Tories, according to the average of four opinion polls published by the Telegraph.

Political changes are set against a modest economic backdrop

Eurozone growth was a positive surprise in 1Q19, with growth at 0.4% QoQ vs 4Q’s 0.2%, driven by better construction output, investments and consumer demand. An extended phase of low rates has kept monetary conditions accommodative. Unemployment rate eased to a ten-year low, boding well for incomes and demand.

Despite this strong start, momentum is set to ease for rest of the year, as growth drivers diverge. Domestic demand is favourable but manufacturing/external trade data remain weak, and face downside risks from the recent escalation in US-China trade. Manufacturing PMIs are below the neutral threshold as regional and China export growth wane. In particular, the auto sector is struggling to recover from the emission standards-led regulatory overhaul in 2H18, as production gets impacted by a global slowdown in the auto production. A six-month delay in the tariff consideration for the auto sector comes at an opportune time. Favourable weather supported construction activity in 1Q, which might also stabilise to soften in 2H. 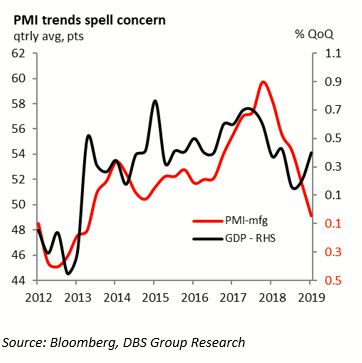 Amongst the core member countries, Spain is leading the pack, with Italy lags the rest, with the latter also likely to be impacted by ongoing budget tussle with the European authorities. Given this trajectory, we maintain our 2019 GDP forecast at 1.2% YoY for the Eurozone before a modest recovery next year.

Inflationary risks are benign with the uptick in core inflation in April to 1.2% YoY seen as a one-off due to a change in the Easter timings from year before. Headline inflation, while inching up due to base effects, is still below the 2% target. This underscores the ECB’s concerns that improving wage conditions have been unable to translate into price pressures, as manufacturers are reticent to pass additional costs. Markets-based inflation indicators have corrected sharply in recent months, slipping below their US counterparts, despite higher energy prices. 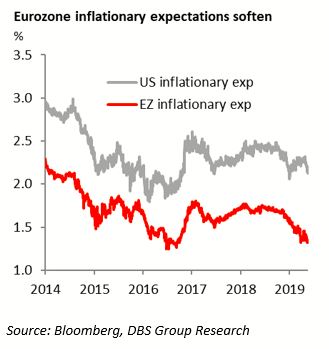 The European Central Bank, on its part, sounded cautious at the last rate review. In June, the guidance will stay dovish as global risks have since risen due to a deterioration in the US-China trade relations. Authorities will also be wary about the weak trend in industrial sectors spilling over to the domestic economy.

Their cautious stance has been backed by assurances that all policy instruments are at the disposal, even after unveiling the Targeted Longer-Term Refinancing Operations (TLTROs), details of which (interest rate, quantum etc.) might be released in June. Markets have also discussed the possibility of a tiered deposit facility rate in a bid to safeguard banks, but the move is not imminent. Concurrently, net bond purchases have been discontinued but the ECB plans to reinvest maturing securities, which is likely to follow the central capital key rule.

In a nutshell, politics is likely to be watched closely as growth remains soft for rest of the year. Benign inflation and an escalation in global risk events will keep the ECB on a dovish tilt to guard against a deterioration in growth conditions. The new ECB Governor will take office in 4Q19, setting the pace for the next leg for the central bank tenure. We don’t anticipate any significant turn in the policy guidance and stance.

The ongoing fall in the European Government Bond and German yields bears watching. Weakness here has been and will continue to constrain US yields. The wide US-EZ rates and growth differential reinforces DBS FX Strategist’s expectations that the EUR/USD is likely to drift towards 1.10 this quarter.