Growth data on May 31 is likely to confirm concerns over a cyclical slowdown. First quarter of 2019 (4QFY19) real GDP growth likely moderated from 6.6% YoY to 6.1%, slowest in over seven quarters.
Radhika Rao30 May 2019

Photo credit: AFP Photo
Growth data on May 31 is likely to confirm concerns over a cyclical slowdown. First quarter of 2019 (4QFY19) real GDP growth likely moderated from 6.6% YoY to 6.1%, slowest in over seven quarters. The supply-side indicator i.e. Gross Value-Added growth likely eased to 6% from 6.3% in the previous quarter. 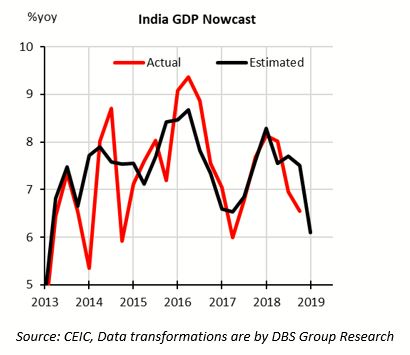 Consumption has moderated in urban and rural centres, according to lead indicators. Passenger car sales contracted sharply in April/ May, while financial conditions got tighter (non-banks adding to mix). Rural wage growth is off lows but ex-base effects, the bounce is modest, which is also validated by a pullback in non-durables production output. 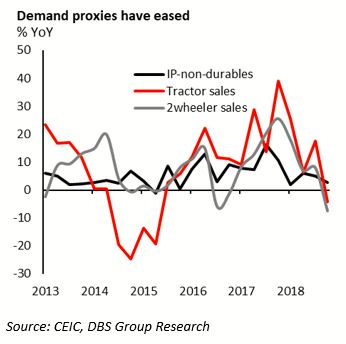 This has spilled over to the investment demand cycle, also impacted by a pullback in public sector spending ahead of the elections. Softer domestic demand is also visible in the non-oil non-gold import demand. Goods exports have, however, fared better (INR terms), leading to a narrower trade deficit and a smaller drag on growth. On the supply-side, financial sector metrics are faring better but non-financial segments, particularly transportation, telecommunication and public administration (reflects government spending), continue to lag.

Close to the heels of the GDP outcome, the RBI policy committee will decide on rates on June 6. We look for a 25bp cut in the Repo rate to 5.75%, taking cumulative cuts in 2019 to 75bp.

The moot point here is what is in store next. In the face of slowing growth and sub-target inflation, the debate over the need (or not) to maintain a wide real rate buffer is likely to resurface. There is already discussion on the need for the RBI to consider lower real rates in its policy objective. Real rate i.e. the rate that savers receive after accounting for prevailing inflation, hinges on how it is calculated. Economic theories put real rate as the gap between nominal interest rate minus inflation.

In midst of a confusion over which markets-based indicator will be ideal for India’s case, RBI’s former Governor Raghuram Rajan had opined that real interest rates should be about 1.5-2.0%, calculated as the gap between expected one-year Treasury bill over the 12-month inflation projection. Taking this as a yard stick, real rates are close to 3.75% at this juncture. Factoring in our estimate for inflation to be close to 4% by late FY20 and assuming 1Y T-bill at 6.25% (~ usually 25-50bp above the repo), will leave the real buffer at 2.25% or 225bp, which is a comfortable cushion.

Theoretically, real interest rates are perceived as a driver for savings and deposit mobilisation. This view is however being challenged. As the two charts show, despite a wide 300-400bp buffer in recent quarters, there was no material pick-up in the banks’ deposits, lagging credit growth and raising concerns over a structural liquidity gap. India’s overall savings rate, led by households, has also been on the decline in recent years, even after the real rates recovered from a sharp deficit before 2013. This has raised questions over the role of interest rates, in isolation, as a driver of savings behaviour. 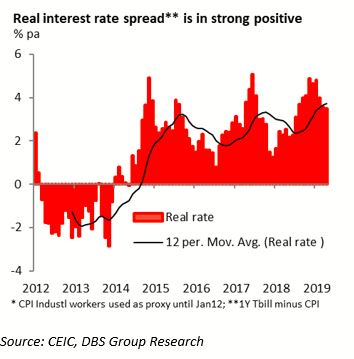 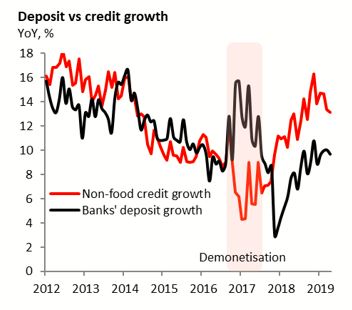 A recent study by RBI staff [1], interestingly, highlighted that deposit growth holds a closer relationship with nominal GDP trends rather than deposit interest rates. It was established that income levels were the most powerful in driving deposit growth in the short-and long-term, while rates mattered only at the margin (low coefficients). If this view holds water, then the justification that real rates needs to be high to boost deposit growth, weakens, implying policy rates have room to be lowered. This is particularly relevant as the economy is in midst of a cyclical slowdown and cost of financing remains high. If the RBI committee provides any clarity on this front, markets are likely to build in more policy easing expectations.

While we maintain the view that rates have plateaued, odds for policy rates to fall by another 25-50bp are rising. The fluid global environment is a wildcard in this context, particularly as a sharp decline in G3 bond yields and an inversion in the US bond yield curve has revived global growth fears. Any resultant impact on the Indian rupee and markets will leave the RBI on a cautious footing.

Apart from rates, markets are also keen to watch for any tweaks in the liquidity framework from the current stance of ‘neutral’ to ‘surplus’. While such an announcement might not be a part of the June 6 rate decision, considering recent OMOs and cash conditions expected to improve after the passage of elections, a change in the framework, might be considered separately.