India: 3 reasons to be bullish govvies

Photo credit: AFP Photo
Indian government bonds are likely to do well in the short-term. With election worries out of the way, 10Y govvie yields have fallen below 7%, reflecting rate cut bets and a more benign global environment for bonds. Moreover, India govvies screen favourably in our technical indicators. Further yield declines are likely in June-August before consolidation takes place.

Three factors are likely to support INR bonds in the short-term.Firstly,the RBI is cut rates while keeping liquidity conditions flush. The monetary policy committee decides on rates on June 6. We are look for a 25bp cut in the Repo rate to 5.75%, taking cumulative cuts in 2019 to 75bp. Inflation has been edging higher since the trough in January 2019, but at sub-3%, readings are still below the 4% target, providing room for RBI to focus on growth concerns. 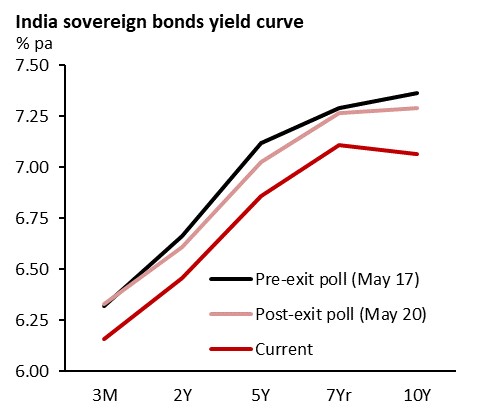 1Q19 (4QFY19) GDP growth declined sharply to 5.8% YoY from 6.6% in 4Q18. On the supply-end, Gross-value added growth slowed to 5.7% YoY from a 6.3% quarter before. Contribution of agricultural output and industry continued their downtrend, while higher public admin (likely by states) and finance lifted services output.Core GVA(i.e. GVA minus farm output and public administration services), which captures private sector trends, reinforced the slowdown in domestic activity. This is likely to revive the debate for the RBI to consider lower real rates in its policy objective. Any clarity on this front can open the door for further easing (seehere). 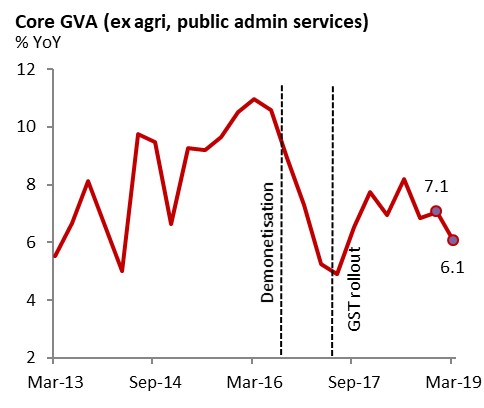 
Full-year Budget will be tabled on July 5. February Interim Budget already made room for a small slippage in the fiscal target, with any additional slip to be constrained to ~5-10bp, not diverging from the fiscal consolidation path (whilst recognising sizeable off-balance sheet borrowings).

Global volatility – escalating trade tensions, plunging G3 bond yields and the US bond yield curve inversion – has heightened since the RBI MPC meeting in April. This week’s decision will be a close one. Nonetheless, akin to 2H18 when benchmark rates were on hold (against expectations for a hike) owing to a benign inflation outlook, despite a weak rupee, we expect domestic concerns to be prioritised over global factors. A decisive win by the ruling coalition also buffets the Indian stock market from a cautious risk backdrop.

Secondly, on the liquidity front, passage of elections and seasonal factors should help to ease the cash squeeze. The RBI announced a tranche of INR150bn worth bond buybacks via open market operations for June, after INR250bn in May. While this was a more measured quantum than anticipated, markets expect this to be first of many. April-May are seasonal favourable months for domestic liquidity, but the situation this year was aggravated by ongoing elections, which has led to higher government cash balances with the RBI (see chart below), due to a delay in fiscal spending and higher cash in circulation. We expect this to ease over the coming weeks. 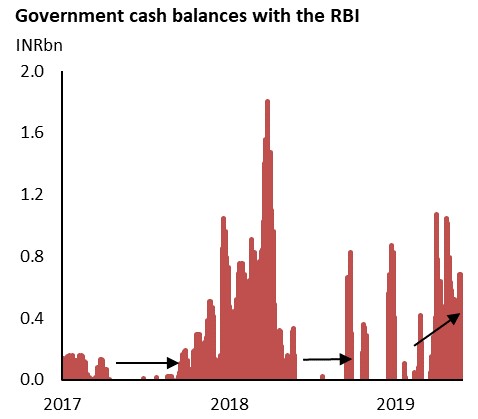 
Concurrently, the special window for foreign portfolio investors – Voluntary Retention Scheme (VRR) – was tweaked. When the previous VRR window last closed in April, interest in GSecs was weak, while corporate limits were partially taken up. With the mainstream limit for FPIs still to be fully utilised (~66% currently), global risk sentiments also need to be conducive for inflows to return. 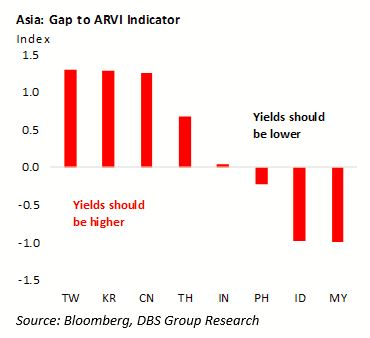 Thirdly, the drop in developed market yields have rendered India govvies attractive. In our screens of relative value, India shows up favourably in our Asia Rates Valuation Indicator (ARVI, see table above) given still-low inflation. It probably helps that India seems to be less exposed to the any fallout from the China-US trade war. Compared to domestic equities (see table below), India govvies also screen well, showing up as one of the most undervalued amongst the economies that we track. 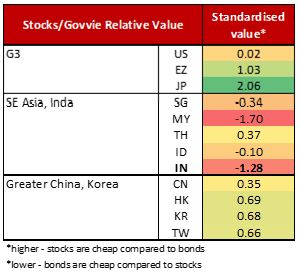 We expect 2Y and 10Y yields fall towards 6.2% and 6.6% respectively in the coming months amid rate cuts and an improvement in liquidity conditions. Beyond the immediate two quarters, the sizable supply pipeline could cause yields to drift higher again. (seehere).