The macro outlook is deteriorating and a multitude of event risks is weighing on sentiments and growth. Investors should re-evaluate their portfolios and take a more defensive stance.
Duncan Tan10 Jun 2019

Fixed income investors are confronted with a deteriorating macro outlook. A multitude of event risks is weighing on sentiments and growth. Potential catalysts to turn things around seem few. It is telling that June’s fall in US Treasury nominal yields has been through the real yield component instead of inflation component. Risk-aversion levels are high and markets' sharp repricing for more Fed cuts point to extreme levels of pessimism on the macro outlook. Hence, we are seeing strong bids for "protection" across asset classes, from US Treasuries/German Bunds to JPY/CHF to Gold. 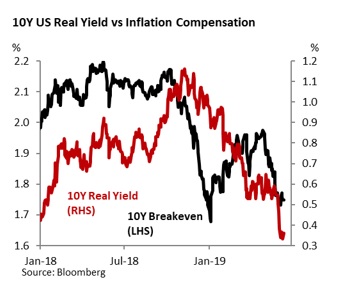 While the Fed/ECB/PBOC puts could kick in to help ease financial conditions and boost market confidence, they may not provide much support for Emerging Markets assets as long as global growth risks remain high. In times like this, fixed income investors could pre-empt higher fixed income and currency volatilities by taking a more defensive stance in their portfolios.

Protect portfolios with some US treasuries

US treasuries (UST) are undoubtedly a vital part of any defence for their liquidity and protection/hedge abilities against a wide array of risks (except inflation). UST yields may have declined by a lot but they are still relatively high (highest in G10 and higher than many parts of Emerging Markets). Unlike other safe havens like Bunds, JPY and Gold, USTs actually pay a positive yield. They are also denominated in a currency (USD) that is expected to strengthen broadly against global currencies in a risk-off environment. To top it off, we think USTs offer an attractive asymmetric payoff profile (i.e. large upside vs limited downside potential). If the macro outlook continues to worsen, UST yields will likely fall further, generating price gains for holders. If the converse happens, the Fed is likely to be slow to re-signal hikes again (i.e. risks of sharp upward repricing of yields is low).

On (1), low beta countries are generally buffered by strong external positions (current account surpluses, ample FX reserves) and move more in line with Developed Market yields (yields fall when outlook worsens). On (2), we think US-China trade negotiations are the biggest event risk and thus, prefer bonds that would rally with any further escalations of hostilities. On (3), we expect Asian fixed income returns to continue to dominate FX returns. Broad easing bias in the region and elsewhere in the world mean that yields are likely to be biased lower, indicating good potential for fixed income returns. On the contrary, FX return potential is likely to be poor as long as global growth worries still linger and the outlook of key anchor currencies like EUR and CNY remain stable to weak. With the above criteria in mind, we like China, South Korea and Thailand sovereign bonds hedged to USD. 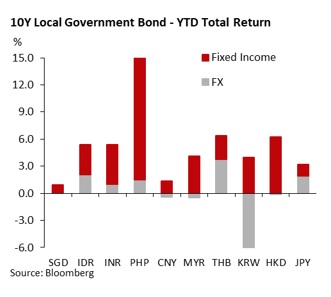 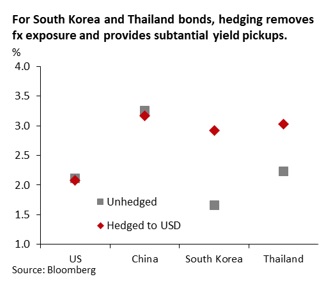 Chinese authorities are expected to step up easing to mitigate the economic effects of tariff war with US. Measures are likely to include injecting more liquidity and lowering funding costs. Consequently, Chinese interest rates are likely to be biased lower and currency weaker (from increased outflows). Which is why we think China Government Bonds (CGB) are attractive if the CNY/CNH exposure is hedged out. Some investors may not have realized, the cost of hedging to USD has declined dramatically over the past 9-12 months (in 2018, high hedging costs was one of the most-cited reasons by investors for not adding CGBs to their portfolios). 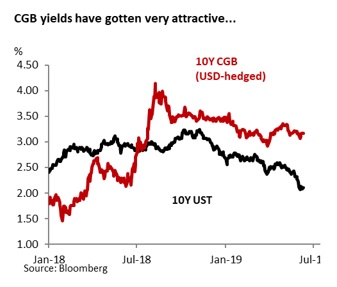 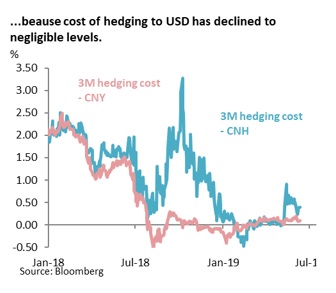 South Korea's economy is levered to global growth and demand and is highly dependent on the semiconductor/electronics cycle. Naturally, within Asia, it appears to be most vulnerable (together with Taiwan) to the ongoing trade and tech war between US and China. Growth prospects are weakening and there is scope for markets to price for more Bank of Korea cuts (beyond the 1 cut each priced for 2H19 and 2H20). Korean Treasury Bonds certainly look well-positioned to benefit. Interestingly, markets seem to hold a similar view. When US-China trade negotiations stalled in May, foreign buying of Korean government bonds spiked (May’s net inflows of USD5.9bn is the highest in at least 7 years). 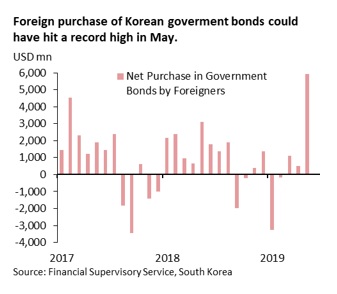 Over the past 12-18 months, Thai government bonds (and the Baht) have proven to be quite resilient, tending to outperform Emerging Markets (EM) peers during times of market volatility and EM stress. We think this relative safe-haven status within EM can be attributed to the country's current account surplus and low foreign positioning in Thai stocks and bonds. In our view, there has been a significant amount of political risk premia priced into Thai bonds (due to first general election since 2014 coup). Now that we are starting to get more clarity on the political landscape, that political risk premia should begin to compress and bond outflows of recent months could start to reverse, helping to buoy Thai bonds.