Chart of the Week: Back in the ring - US Fed vs Markets

There is still a considerable level of intrigue on the US Federal Reserve’s next course of action, after last week’s FOMC.
Radhika Rao24 Jun 2019

Chart of the Week: Back in the ring - US Fed vs Markets

There is still a considerable level of intrigue on the US Federal Reserve’s next course of action, after last week’s FOMC. The Fed did enough to please markets with a few dovish phrases, with members also moving in the direction of rate cuts, but data are far from justifying such a move. This is reflected in the divergence between the US Fed’s dot plots and markets’ pricing - dot plots point to no move this year, but a cut in 2020. Markets are, however, betting on frontloaded rate cuts (see chart below) justified either as ‘insurance cuts’, shield against heightened trade tensions or to safeguard against a cyclical slowdown in US growth. In this regard, the G20 meeting on June 28-29 in Japan assumes importance, where the US and China are expected to resume trade talks, which broke down in early-May when the US administration announced plans to increase tariffs on all of China’s exports to the US. Signs of reconciliation might see markets pare part of these rate cut calls, but any breakdown in negotiations could lead to weaker sentiments and more easing in the pipeline vs what is being priced in currently. 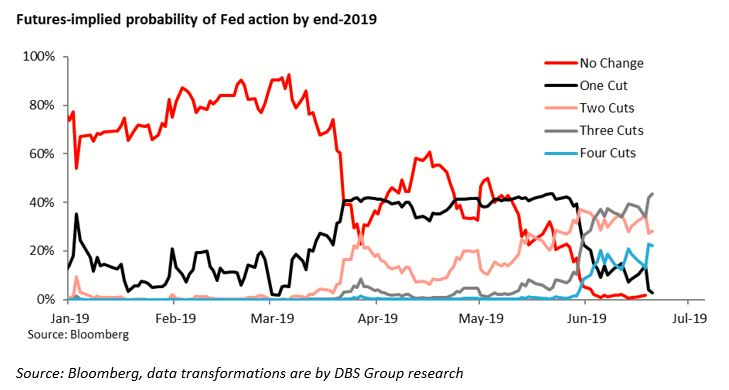 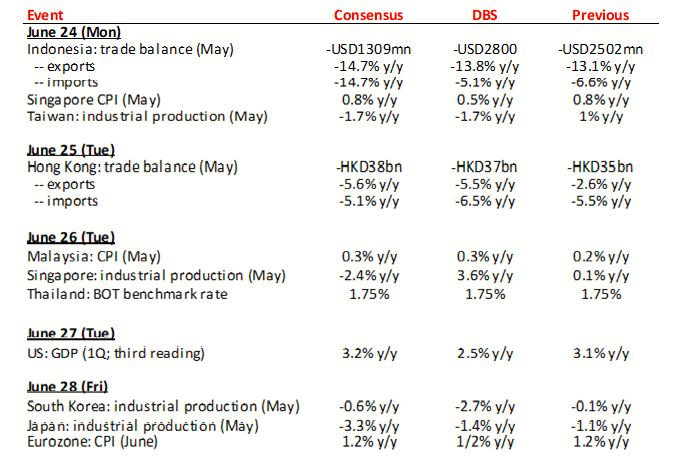 Hong Kong: Trade figures might worsen further in May due to external uncertainties. Outward shipments are forecasted to drop 5.5% YoY compared to 6.5% in imports. This is partly due to the front-loading activity before rest (USD300bn) of China’s exports are subjected to a higher (25%) tariff. Imports are expected to slump due to weakening domestic demand. Retail sales recorded a decline of 4.6% in April. The equity market consolidation in May should translate into weaker domestic consumption sentiments. A weakening CNY exchange rate amid the escalating trade tension between China and the US will also dampen the tourist spending. These will translate into downward pressure of import demand.

Indonesia: We expect May19 trade balance to remain in deficit at -USD2.8bn with both exports and imports growth still weak at -13.8% and -5.1% yoy. We expect imports to pick up slightly due to Eid al-Fitr seasonality effect. In terms of volume, since 4Q18, exports have accelerated while imports have slowed down. Hence, a widening trade deficit can mostly be explained by weaker price effect in exports. Heightened trade tensions have impacted non-Oil and Gas (non-O&G) trade balance negatively, while O&G balance has improved. Raw material and capital goods imports could accelerate further after as the new government assumes office, with President Jokowi continuing focus on infrastructure. Consumption goods imports might flatten as weak commodity prices hurt domestic demand in addition to the delayed impact of Rupiah depreciation. Development in trade balance and capital inflows are the key factors that will determine whether the Bank Indonesia cuts policy rate this year or next.

Japan: Industrial production is expected to have slipped to -1.4% YoY in May from -1.1% in April. Manufacturing PMI dipped below 50 in May, to 49.6. Exports also shrank -7.8% YoY, a bigger decline compared to -2.4% in the previous month. The deterioration in global demand, rise in China-US trade tensions, together with the unfavourable calendar effect (longer-than-usual Golden Week holiday), should have contributed to the weakness in May. In response to the downside economic risks, the BOJ governor said last week that interest rates could stay low beyond spring 2020 and it is appropriate to think flexibly on the bond yield range. This signals the possibility for the BOJ to strengthen forward guidance on monetary policy and widen the 10Y yield target band at the upcoming meetings, should external risks escalate further to threaten Japan’s growth/inflation outlook.

Malaysia: Inflation figures for May is due this week and the headline number is expected to remain at 0.2% YoY, unchanged from the previous month. However, this should mark the bottom of the inflation cycle, and start rising June onwards. Effects from post-election policy changes, including the zero rating of the GST, subsidies for petrol and removal of toll charges, will likely fade from June onwards. This should make for a steady climb in headline CPI inflation. However, oil prices were supposed to be a key driver, but it has recently started to moderate on weaker global outlook. This could weigh on inflation. Hence, rise in inflation in the coming months could slower than expected, which could compel us to lower our full year inflation forecast, which currently stands at 1.7%.

Singapore: Inflation and industrial production figures for May are on tap this week. Headline CPI inflation is expected to remain benign at 0.5% YoY, down marginally from 0.8% in the previous month. But this could mark the bottom of the inflation cycle as inflation is likely to start trending higher in the coming months. The high base effect is from COE premium is fading and in the coming months, impact from the energy market reform will also dissipate. Meanwhile, core inflation could continue to ease, which underscores the slowdown in growth momentum within the economy and the easing in demand pull inflationary pressure.

Industrial output for the month could potentially provide some respite. The headline number is likely to improve to 3.6% YoY, from 0.1% previously. While risks in the external environment has picked up with the renewed hostilities between the US and China, there could be some benefits from trade diversion resulting from the trade war. Most recent trade figures may have provided a glimpse of that. Non-oil domestic exports for May rose by 6.2% compared to the previous month although year-on-year number, weighed down by high base effect was down by 15.9%. If the monthly series can be sustained, it could well suggest a bottoming-out of the cycle and potentially even improvement ahead. It remains whether things could turn out better than expected.

South Korea: Industrial production is projected to have fallen to -2.7% YoY in May, down from -0.1% in April. The decline in exports widened to -9.4% in May from -2.0% in April. Manufacturing PMI dipped below 50 again, to 48.4. The Bank of Korea will face the pressure to downgrade GDP growth forecast at the July meeting, and move to cut rates by at least 25bps in the remainder of this year. The latest official comments have turned dovish, with the BOK governor saying that the central bank will respond “appropriately” as uncertainties such as China-US trade conflicts rise sharply. The pressure of KRW depreciation has also dissipated since the beginning of June, thanks to the improvement in current account balance and the expectations for Fed rate cuts, which helps to remove a hurdle for BOK easing.

Taiwan: Industrial production is projected to have contracted by -1.7% YoY in May, after rising a modest 1.0% in April. The decline in exports widened to -4.8% in May from -3.4% in April. Export orders also dropped to -5.8% from -3.7%. Global demand weakness, China’s renewed slowdown, and further rise in US tariffs on USD200bn Chinese goods all suggest that external trade conditions have deteriorated. There was no clear signal that the central bank will move to ease monetary policy, however. The CBC cut the 2019 GDP growth forecast only slightly during last week’s policy meeting, from 2.13% to 2.06%, citing the development in China-US trade tensions as a wild card.

Thailand: The Bank of Thailand meets on June 26 to decide on rates. As Asian peers consider shift to an easing policy bias on contained inflation risks and subdued growth, focus is on BOT’s stance. GDP growth weakened to 2.8% in 1Q19 from a revised 3.6% in 4Q18, setting off the year on a soft note. Year-to-date inflation has averaged 0.9% YoY, below the BOT target. Core inflation is even more benign at 0.6%, posing little material threat to policy direction. This has caused some to call for the BOT to lower rate cuts, particularly after a policy committee member opined that the Bank will be data-dependent in charting the policy course. Slowing growth and low inflation make a case for lower rates, but this is countered by the need to preserve financial stability and retain policy space to act if risk sentiments deteriorate. Even as pressure grows to reverse December’s hike, we see rates on hold this week.