The Bank of Thailand MPC voted unanimously to keep the policy rate unchanged at 1.75% on June 26. 2019 GDP projections were cut, inflation was held unchanged, but core was trimmed.
Radhika Rao26 Jun 2019

Photo credit: AFP Photo
The Bank of Thailand MPC voted unanimously to keep the policy rate unchanged at 1.75% on June 26. 2019 GDP projections were cut, inflation was held unchanged, but core was trimmed (highlights are in the table below).

Growth projections were cut to 3.3% for 2019 vs 3.8% earlier. Next year’s GDP forecast was also trimmed by 20 bp to 3.7%. Headline inflation was left steady for this year but lowered marginally for 2020. Even so, we need to be vigilant of signs that could lead to a possible shift in the BOT’s stance. More of its Asian peers have, with inflation risks contained and growth subdued, started to lean towards an easing policy bias.

The central bank is bothered by an evolving economic outlook and monitoring a sharp appreciation in the baht driven by capital inflows.

The Thai economy started the year on a soft note. Real GDP growth weakened to 2.8% YoY in 1Q19; 4Q19 growth was revised down to 3.6% from 3.7%. A good part of the slowdown was attributed to consumption with the rest from weaker government spending from the commencement of new projects stalled by political uncertainty. Inventory accumulation remained a key growth driver, but its contribution was less compared to the previous quarter. The most notable drag came from net exports which saved 3.6 percentage points from headline GDP. Weak service sector receipts were likely behind this weak performance, as goods trade turned in surpluses in the period. Tourist arrivals moderated again after a stable 4Q. Recently released manufacturing production was also sharply lower than consensus had estimated. 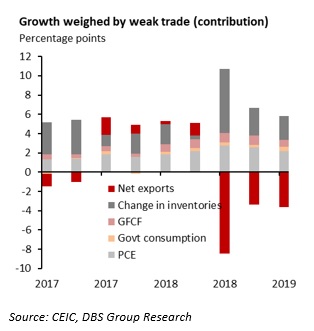 In rest of 2019, ebbing political uncertainty should help improve sentiments and jumpstart spending. This will, however, be countered by a negative spill-over from weak trade activities into domestic demand. Factoring in uncertainty over trade war developments (decision on auto tariffs and preferential treatment under the GSP framework), we have tempered our 2019 growth forecast to 3.4% from 3.8% previously. The state planning agency trimmed its 2019 forecast to 3.3-3.8% from 4.1% earlier, based on exports at 2.2% from 4.1% earlier held.

Year-to-date inflation has averaged 0.9% YoY, below the BOT’s 1-4% target. Core inflation was more benign at 0.6% and posed little material threat to policy direction.

Secondly, the Thai baht has outperformed its regional peers this year. The story is similar when compared on effective exchange rate basis. The THB has appreciated 3% on a nominal basis and 3.5% on a real basis between December 2018 and May 2019. With inflation below target amidst negative export growth, policymakers are likely to be perturbed by the baht’s strong gains.

As a base case, we expect rates to be held unchanged, as the BOT MPC maintained a neutral stance. Policymakers will be data-dependent, even as slowing growth and low inflation make a case for lower rates. This is countered by the need to preserve financial stability and retain policy space to act if risk sentiments deteriorate. At 1.75%, policy rates are already low. However, if baht appreciates further, there is a risk at the margin that the need to contain THB’s gains might force their hand.

On an encouraging note, an end is insight to the post-election political uncertainties. Parliament has voted for ex-army chief general and incumbent Prime Minister Prayut to remain as head of state. The ruling pro-junta coalition seems primed to gain support from two mid-sized parties, Bhumjaithai and Democrat party to form the next government. Both houses are expected to convene by mid-July.

Thailand’s stronger external balances continue to draw investors into THB assets, despite the likelihood of slow growth. Compared to the ASEAN peers, Thailand’s current account surplus is still sizeable (particularly compared to the deficits in Indonesia and the Philippines). Owing to healthy service sector receipts (tourism) and goods trade surpluses, Thailand has run current account surpluses in the past five years. Even as export growth slows, softer import demand has kept the balance in net surplus. Nonetheless, the quantum of trade surfeit continues to narrow, and is likely to register a net CA balance of 6% of GDP this year.

So far this year, Thai domestic markets have witnessed cumulative USD4bn worth inflows, lifting the equity and bond markets. 10Y yields have fallen from 2.4-2.5% between Jan to May 2019 towards 2.1% at present. We expect further expectations of THB strength and growth-supportive central bank to weigh on the yield curve and underpin equity indices.