The increased volatility from a re-escalation in trade tensions has been dampened by the Fed and ECB’s recent dovishness into the Xi-Trump talks at the G-20 summit.
Masyita Crystallin01 Jul 2019

At the G-20 summit on June 28-29th, a US-China trade truce saw US President Trump hold off new tariffs (on the remaining USD300bn of Chinese imports) and allow US companies to resume sales to China’s Huawei Technologies Co. Despite the de-escalation, reaction from financial markets were rather muted. Direction of change suggest market relief, with equities, CNY and oil rallying, while bonds, JPY and gold fell. The increased volatility from a re-escalation in trade tensions has been dampened by the Fed and ECB’s recent dovishness into the Xi-Trump talks at the G-20 summit. From the perspective of markets, a truce was probably the best available outcome. The truce would not be enough to roll back easing expectations at the Fed and ECB but will be useful in rolling back bets for aggressive Fed cuts. 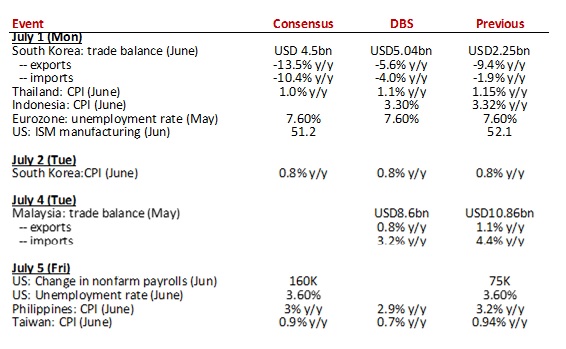 Eurozone: The common currency bloc is facing slowing inflation, but a falling unemployment rate also provided comfort to policymakers that job conditions remain supportive. The unemployment rate likely eased to 7.6%, which bodes well for income and consumption levels. Eurozone wage growth is also off lows and rising, but an insufficient trigger for inflationary pressures as producers’ pricing power remains benign. Close attention is being paid to a modest uptick in German jobless rate, a first in almost two years, as slowing growth bites. Incoming data, particularly sentiment indices, have been weak at the margin, which prompted the ECB to provide a strongly dovish guidance earlier this month.

Indonesia: CPI inflation is expected to remain stable at 3.2% from 3.32% in May. The impact on Eid festivities to food inflation is more modest in June compares to May (during the fasting period). However, the impact to transportation inflation could be more sizable as airplane, train and bus tickets have risen significantly around Eid. We see CPI inflation to remain benign for the rest of the year, which combined with softer trade deficit could prompt Bank Indonesia to cut the 7 days reverse repo by 25bps this year.

South Korea: CPI inflation is projected to have remained low at 0.8% YoY in June, little changed from 0.7% in May. The inflationary impact of KRW depreciation should have been offset by the decline in international oil prices. Domestic price pressures should have remained subdued, owing to the slowdown in GDP growth, deterioration in output gap, weak labor market conditions and falling inflation expectations. The Bank of Korea will face the pressure to revise down its 2019 inflation forecast, which currently stands at 1.1%, at the July meeting. This will likely pave the way for the BOK to lower the benchmark rate by 25bps to 1.50% by the end of this year.

Taiwan: CPI inflation is expected to have stayed muted at 0.7% YoY in June, compared to 0.9% in May. Import cost pressures have been kept at bay, thanks to the decline in global oil prices that offset the impact of TWD depreciation. Demand-side inflation is a non-issue, given the slowdown in GDP growth, deterioration in output gap, lukewarm consumption growth, and subdued inflation expectations. The main wild card comes from food prices. Global dairy and meat prices have been rising steadily so far this year, due to the drought conditions in Oceania and the spread of African Swine Fever in China. Domestic vegetable and fruit prices also tend to be volatile during the summer typhoon season. Assuming there is no supply-side disruption, CPI figures are expected to stay at around 0.5-1% in the second half of this year.

Thailand: Inflation risks are subdued in Thailand, with June CPI expected to rise 1.1% YoY vs 1.2% month before. Year-to-date inflation has averaged 0.9% YoY, below the BOT’s 1-4% target. Core inflation was more benign at 0.6% and posed little material threat to policy direction. Last week, the Bank of Thailand MPC voted unanimously to keep the policy rate unchanged at 1.75% on June 26. 2019 GDP projections were cut, inflation was held unchanged, but core was trimmed. As a base case, we expect rates to be held unchanged this year, as the BOT MPC maintained a neutral stance. Policymakers will be data-dependent, even as slowing growth and low inflation make a case for lower rates. This is countered by the need to preserve financial stability and retain policy space to act if risk sentiments deteriorate. At 1.75%, policy rates are already low. However, if baht appreciates further, there is a risk at the margin that the need to contain THB’s gains might force their hand.