India’s full-year Budget for FY20 not only stuck to the fiscal consolidation path, but also lowered the deficit target vs the Interim Budget and FY19.
Radhika Rao05 Jul 2019

Photo credit: AFP Photo
India’s full-year Budget for FY20 not only stuck to the fiscal consolidation path, but also lowered the deficit target vs the Interim Budget and FY19. This improvement is backed by higher indirect tax and non-tax revenue assumptions along with firmer nominal GDP growth, while expenditure was held largely unchanged.

Before we delve into the specifics, the FY20 Budget marked a sense of continuity but also carried winds of change. The broader fiscal consolidation path was adhered to along with a continuation of the emphasis on the welfare construct and push to improve infrastructure. While expectations of an explicit tax relief or cash transfers did not pan out (already laid out in February and widened the net last month), the Finance Minister signalled that plans to boost consumption will remain a priority. Stock of progress on social sector plans from the first term was taken, including rural road development, housing, electricity, gas connections, sanitation etc. and assured that these supply-side measures will continue.

Focus instead was on improving the investment climate (details are in latter part of the note) and lay out plans for the medium-term. Addressing near-term need for financial stability, INR700bn will be infused into domestic banks. Non-bank sectors also received a hand with key changes including banks incentivised to buy highly rated NBFC assets to provide liquidity, amongst others.

In the meantime, there were shades of change, marked by plans to raise part of the fiscal borrowings in offshore markets, merging of NRIs and FPIs investor categories, blueprint for national grids in key utilities and bigger free float for equity markets. Bond markets reacted positively to the announcement of a move to the offshore markets, with 10y yields slumping by more than 10bp.

There were also other ambitious plans, while details are awaited, including a blueprint for a national gas grid, water grid and airports, improve accessibility to clean water, proposal for INR100trn investments into infrastructure over the next five years, amongst others. 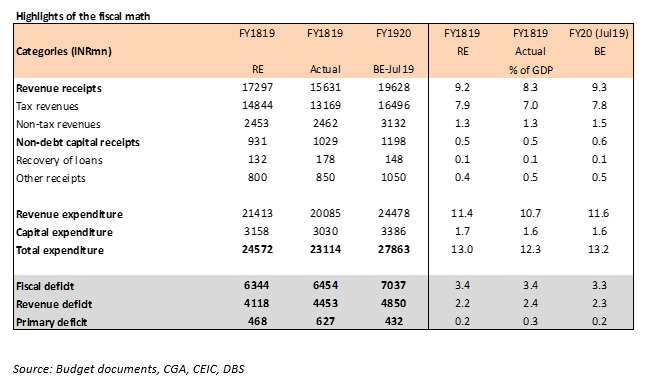 While the revised FY19 numbers were available in the Budget documents, we prefer to compare with the FY19 actual numbers (see table above), which had seen revenues undershoot revised estimates and led to a scaling back in the expenditure as well. Compared to a fall to 8.3% of GDP in FY19 (actual), FY20 revenue receipts are pegged to rise to 9.3%, underpinned by better tax and non-tax contribution. Amongst the measures on Friday were that the cut in the corporate tax rate to 25% will now be applicable to all firms with turnover of over INR4bn (~covers 99% of the firms according to the FM). 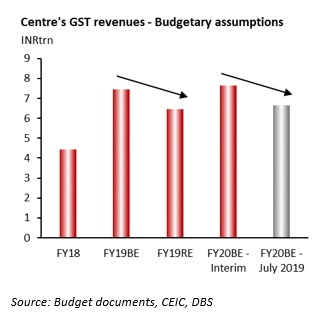 Under indirect taxes, encouragingly, centre’s GST revenues were revised down by INR1trn from an inflated assumption in February. To make up for this shortfall import duties on gold (10% to 12.5%) and precious metals have been raised as well as cess on petroleum and diesel sales. The most notable rise was in divestment proceeds – from INR800bn in FY19 to INR1.05trn (0.5% of GDP). Pending the decision on the economic capital framework, RBI (and other PSU) dividends are estimated at an optimistic INR900bn (0.4% of GDP).

Under expenditure, FY20 total outlays have raised due to higher revenue expenditure while capital expenditure continues to be scaled back. Amongst the sectors, disbursements towards agri-allied activities is expected to rise a sharp 75% YoY vs a 65% rise in FY19 RE, accompanied by higher allocation towards IT and telecom, rural development, education, development of the North East region and a 74% rise in the centre’s transfer to the GST compensation fund.

Taxation: The lower corporate tax rate of 25% was extended to companies with a turnover of INR4bn, covering ~99% of the universe. Relief in levy of Securities Transaction Tax (STT) provided by restricting it only to the difference between settlement and strike price in case of exercise of options. Increase in surcharge for individuals with taxable incomes above INR50mn to 42% and 38% for incomes above INR20mn to INR50mn. Select import duties and cess have been raised.

Social welfare construct: For affordable housing, permit an additional deduction of up to INR150k on interest paid on loans borrowed up to 31st March, 2020. Ensure watre security and supply by integrating demand and supply side management of water at the local level, including creation of local infrastructure for source sustainability like rainwater harvesting, groundwater recharge and management of household wastewater for reuse in agriculture. Plans to invest widely in agri infrastructure.

Scheme of Fund for Upgradation and Regeneration of Traditional Industries’ (SFURTI) aims to set up more Common Facility Centres (CFCs) to facilitate cluster based development to make the traditional industries more productive and generate employment.

Banks have been incentivised to to purchase high-rated pooled assets of financially sound NBFCs amounting to INR1trn during FY20, backed by a one-time six-month partial credit guarantee by the government. Regulation of the Housing Finance companies will now come under the central bank from the National Housing Board. Regulatory changes including the housing finance companies brought under the preview of the RBI from National Housing Board earlier. NBFCs which do public placement of debt have to maintain a Debenture Redemption Reserve (DRR) and in addition, a special reserve as required by RBI, has also to be maintained.

These measures to revive credit flow from NBFCs are timely, which should ideally be followed by the regulators conducting a thorough asset quality review and take resolution steps thereafter. Credit flow is likely to return to the NBFCs once the asset-liability mismatch has been tended too, with banks meanwhile likely to come back to the fore.

Real and portfolio investments: A Credit Guarantee Enhancement Corporation for which regulations have been notified by the RBI, will be set up in 2019-20. An action plan to deepen the market for long term bonds. Proposed to permit investments made by FIIs/FPIs in debt securities issued by Infrastructure Debt Fund – Non-Bank Finance Companies (IDF-NBFCs) to be transferred/sold to any domestic investor within the specified lock-in period.

Further opening up of FDI in aviation, media (animation, AVGC) and insurance sectors is under study. 100% FDI will be permitted for insurance intermediaries. Local sourcing norms will be eased for FDI in Single Brand Retail sector.

For start-ups, to resolve the so-called ‘angel tax’ issue, the start-ups and their investors who file requisite declarations and provide information in their returns will not be subjected to any kind of scrutiny in respect of valuations of share premiums. The issue of establishing identity of the investor and source of his funds will be resolved by putting in place a mechanism of e-verification.

Incentives have also been outline for start-ups, electic vehicle segments in addition to other green initaives.

Domestic bond markets were watching the borrowing program with trepidation after a sharp increase in the Interim’s Budget gross borrowing program had seen long-term yields jump earlier in the year. Gross borrowings for FY20 was meanwhile retained at INR7.1trn, with net at INR4.7trn. Markets reacted favourably to the government’s plans to raise part funds in the offshore markets, which led the 10Y yields to slip more than 10bps to mid-6.6% on Friday. This closes in with our target for the 10Y as we had laid out here.

Also of interest, the government announced plans to raise part of its gross borrowings via foreign currency debt (size still to be announced). On the positive side, this will allow more room for private sector borrowers to tap the domestic markets, whilst also setting a benchmark for external investors, yielding to better pricing for other Indian credits. This break from tradition, however, could also be seen as an indication that domestic household savings were probably insufficient to meet the government’s funding needs and a new investor base could be tapped in midst of low/negative yielding papers globally.

For monetary policy, as the government maintains fiscal restraint, this reinforces our view that another 50bp cuts are likely in rest of FY20. Monetary policy is likely to do the heavy-lifting to boost growth this year (see here).