Year to date, 10Y yields on German Bunds, Europe's risk-free asset, have fallen 60bps to ~-0.36%. Concurrently, sovereign yield spreads to the Bund, measure of credit risk premium, are declining fast. Consequently, sovereign bonds like Spain and Portugal have rallied a lot on both lower risk-free rate and tighter yield spreads.

Weaker growth outlooks across Europe should really drive yield spreads wider. However, ECB's dovishness (Fed's helped too) and increasing market expectations for more ECB stimulus are overwhelming (rate cuts, further extension of forward guidance, restart of QE). Secondary factors compressing yield spreads include the hunt for positive yields (much of Europe is negative) and ECB’s announcement of TLTROIII (cheap funding for banks which helps to drive carry trades in higher-yielding sovereigns). Looking ahead, if ECB moves to raise issue/issuer limits on bond buying, markets will reprice for greater likelihood and larger size of possible QE programme. That could be the catalyst for the next leg down in sovereign yield spreads. 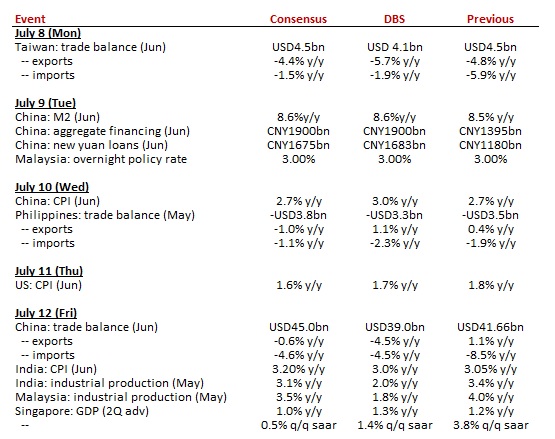 China: Both exports and imports are expected to decrease by 4.5% YoY in June, from advancement of 1.1% and decline of 8.5% in May respectively. Outward shipment should continue to fall due to existing tariff. Import growth is forecasted to narrow amid a weakening in domestic demand. Early indicators, NBS Manufacturing PMI, remained in contraction zone. Both the new export orders and imports components of the PMI fell to 46.3 and 46.8 in June from 46.3 and 47.1 respectively. Looking ahead, we remain cautious of the trade performance of China due to a moderating global demand and the on-going trade talk between China and the US.

On monetary front, liquidity injection should have bounced back somewhat due to pro-growth policies. M2 is expected to grow by 8.6%, compared to 8.5% in May. Liquidity injected through the latest required reserve ratio cut last month should have fed through to small and medium size bank. Both new increase in aggregate financing and new yuan loans should therefore revive in June. This should translate into some upward pressure on inflation rate. Food prices should stay elevated due to the spread of swine fever. The CPI is projected to rise by 3.0% YoY, up from 2.7% in May.

India: Inflation and production numbers are due this week. Our forecast is for the June inflation to be 3% YoY, below consensus and vs 3.05% in month before. High-frequency food price pressures signal signs of stabilization after having risen for six months. Domestic fuel prices were also a slightly lower in the month, which along with a seasonal pullback in the housing segment is likely to keep the headline in check, whilst the core gauge drifts towards 4.0% from a high of 5.3% in January. Taking cues from PMI trends and core industries output, we expect IIP to grow by a slower 2.0% YoY in May from 3.4% in April. Soft production and manufacturing numbers are largely in sync with regional trends as protectionist trade policies linger. On policy, a mix of sub-target inflation and weak IIP numbers is likely to keep the RBI policy committee on the easing path, with a 25bp cut expected in August.

Malaysia: Bank Negara’s policy meeting will convene this week. Expectation is for the central bank to remain status quo in its policy decision, keeping the Overnight Policy Rate (OPR) unchanged at 3.00%. After the insurance cut in the previous policy meeting, whereby the central bank lowered the OPR by 25bps, the authority will likely take a “wait and see” approach in the near term to allow the effects of the previous easing to cascade down the system.

Downside risk to growth has increased from heightened uncertainties in the global and domestic environment, trade tensions and extended weakness in commodity-related sectors. Expectation is that the economy could register a slower growth of 4.5% YoY for the year, from 4.7% previously. Separately, inflation though likely to rise, will continue to remain manageable.

With the US Fed and regional central banks turning increasingly dovish, and BNM having already did a pre-emptive cut, we expect any further monetary easing by the central bank to be conditioned on the US Fed making an outright easing. We expect possible rate cuts of up to 50bps in the US by 4Q. With that, expectation is that BNM’s next move could be in November.

Philippines: Trade balance might slightly improve to -USD3.3bn from -USD3.5bn in the previous month, both due to lower imports and higher exports. We expect exports to grow at 1.1% YoY from 0.4% while imports to -2.3% YoY from -1.9%. Weaker imports are contributed by lower oil price and slower investment activities. In line with dovish stance of US, advanced economies and peers, Philippines might follow the herds by cutting policy rate by another 25bps before year end.

Singapore: Advance GDP estimates for 2Q19 will be on tap this week. The outcome could be awful judging from the higher frequency trade and industrial figures. A forecast of 1.3% YoY (1.4% QoQ saar) has been penciled into our forecast but risk is certainly on the downside. In fact, our full year forecast of 2.1% is under threat if the second quarter’s performance falls short of expectation. The improvement which we had expected following the sharp plunge in 4Q18 appears to have been weaker than previously thought.

Moreover, the manufacturing sector is already in a technical recession. It has already experienced two consecutive quarters of sequential (QoQ) decline. Another quarter of disappointment from the sector, which is likely judging from the hostile external environment and weak global demand, would increase the risk of the sector dipping into an outright recession (i.e., full year contraction). While the services sector, which accounts for the bulk of the economy (about two-third) could potentially pick up some of the slack from manufacturing, it is also under tremendous pressure. There are negative spillovers from manufacturing to services, and the externally oriented services clusters are also struggling amidst weak external demand. The construction sector is doing well on the back of a healthy project pipeline, but its growth contribution is limited by its relatively smaller GDP share.

Indeed, uncertainties remain even after the US and China have resumed the trade negotiation. More specifically, while a technical recession for the overall economy is not yet a given, the risk is rising given the external headwinds. Taking these risks into account and given a potentially weak outcome for 2Q19 figures, we may be compelled to lower our full year GDP growth forecast at some point in time.

Taiwan: Exports are expected to decline at a faster pace of -5.7% YoY in June, compared to -4.8% in May. South Korea’s June trade data surprised on the downside last week. Taiwan’s June manufacturing PMI also deteriorated, falling to a 7-year low of 45.5. The further rise in US tariffs on the USD200bn Chinese exports, together with the slowdown in global demand, should have weighed on regional trade and business activities since late-2Q. Thanks to the US-China trade truce after the G20 Osaka Summit, the risk of further supply chain disruption has been reduced, for the time being. New headwinds, however, come from the rise in Japan-Korea tensions. Japan’s latest move to curb the exports of high-tech materials to South Korea could negatively affect the regional electronics supply chains, given that Japan dominates global supply of high-tech materials and South Korea dominates the production of display screens and memory chips.