Federal Reserve Chairman Jay Powell may be secure in his job by constitutional mandate, he nevertheless seems to be doing the bidding for US president Trump.
Irvin Seah15 Jul 2019

Chart of the Week: Nominal GDP growth data of the US does not justify Fed’s below-target inflation concerns

Federal Reserve Chairman Jay Powell may be secure in his job by constitutional mandate, he nevertheless seems to be doing the bidding for US president Trump. In Congressional testimony (for the semi-annual monetary policy report) last week, the head of the US central bank could only point to general and tangential risks to the global outlook to make the case for rate cuts. One flag raised by Mr. Powell was inflation remaining well below target. But latest data do not appear worrisome at all. As per June CPI, core CPI rose 0.3%mom, the largest increase since January 2018, following four straight monthly gains of 0.1%. Prices for apparel, used cars and trucks, and household furnishings rose, along with the cost of healthcare and rents. Beyond the CPI, nominal GDP growth is near the highest in the cycle. Concerns about below-target inflation appear rather weak, in our view. 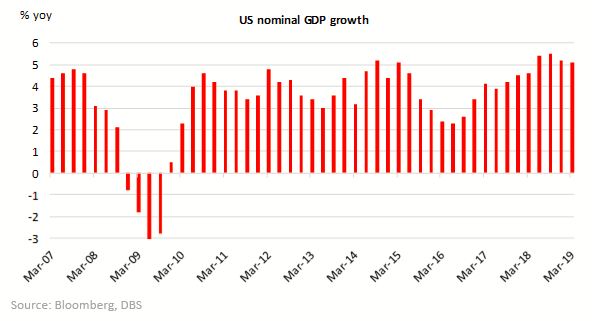 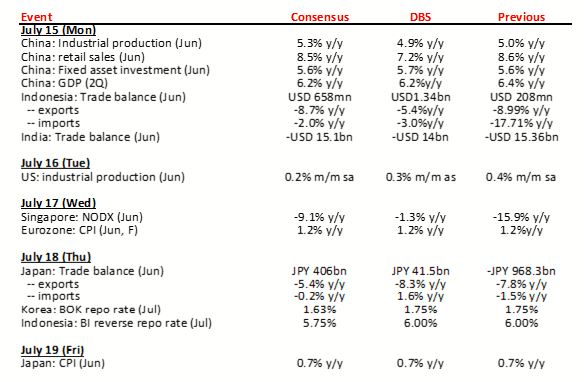 China: The domestic demand is expected to ease further in June as suggested by the contracting NBS Manufacturing PMI (49.4). Retail sales growth should have softened to 7.2% YOY in June from 8.6% in May, as the seemingly rebounded figure in May was largely a result of seasonal factor (longer May Day holiday). Industrial production, likewise, is expected to fell to 4.9% from 5.0% amid a moderating global demand and trade tension with the US. On a contrary, fixed asset investment growth is forecasted to edge up to 5.7% from 5.6% on the back of accommodative monetary policy and fiscal support. The GDP growth of 2Q is therefore forecasted to drop from 6.4% to 6.2%.

Eurozone: Final reading of the June inflation this week is likely to point towards benign inflationary conditions, at 1.2% YoY, well below the 2% target. Oil prices have risen in past few weeks, which might feed into modest pressures, but still be overshadowed by soft demand-side pressures. The ECB has already laid the ground for a dovish switch in the upcoming July policy review. The toolkit at this juncture primarily consists of a further reduction the deposit facility rate (might necessitate a tiered deposit facility concurrently), rate cuts, signaling a restart to asset purchases or expand the pool of investible assets, amongst others. LTROIII will be rolled out in September. With the reaction in the currency becoming a bigger watch factor, markets continue to focus on available room to ease policy for the major central banks (between US, EZ and Japan).

Indonesia: We expect Jun19 trade balance to reach USD1.34bn from USD 208mn. Both exports and imports are expected to decline at a slower rate than May19, at 5.4% and 3.0% YoY. Oil and gas trade balance might deteriorate further with climbing oil price from USD1bn in May19. Major exports commodity prices remain unsupportive, coal price was down by more than 10% compare to May19 and CPO price started to decline mid-Jun19, hence the full effect will be reflected in the July trade balance. Manufacturing exports decline by -73.6% YoY mostly affected by slow global trade demand. Weak domestic economic activity and weakening Rupiah are reflected in all categories of imports, consumption (decline by -10.9% YoY), raw material (-19.1% YoY) and capital (-15.2% YoY). Weaker trade is likely to continue in 2H19 especially if the government continue to focus on infrastructure development. Trade balance and Fed dovish stance are two most important determinant for Bank Indonesia to contemplate a policy rate cut.

Japan: CPI inflation is expected to have dropped slightly to 0.7% YoY in June from 0.8% in May. The deflationary impact of JPY appreciation and oil price declines should have been reflected in June CPI numbers. But domestic price momentum should remain stable for the time being, thanks to the tightness in the labour market and the rise in public inflation expectations. The Bank of Japan may revise down its growth and inflation forecasts at the July 31 meeting, but only marginally. Given the relatively high technical hurdles, a significant economic/financial shock (e.g., recession, USD/JPY below 100) would be required to trigger additional monetary easing from the BOJ.

South Korea: The Bank of Korea is expected to downgrade growth and inflation forecasts at this week’s meeting, paving the way for a 25bps rate cut in the next couple of months. The BOK is facing pressure to ease monetary policy to bolster the economy. Growth momentum has weakened again since May, as indicated by the renewed declines in exports, PMI, industrial production and consumer confidence. Despite the relief from US-China trade truce, Japan’s latest decision to curb the exports of high-tech materials to South Korea poses new risks to the 2H growth prospects. On the other hand, inflation has remained well below target (0.7% YoY in June), inflation expectations have come down, and property prices have continued to cool. As the current account has recovered from the one-off deficit in April, the KRW’s volatility has also eased. All these should provide the needed flexibility for the BOK on its interest rate policy.

Singapore: June non-oil domestic exports due this week will likely bring some respite to an otherwise dreary export outlook. The headline number is expected to register a softer pace of decline at -1.3% YoY. This is a significant improvement from a drastic 15.9% plunge in the month. An exceptionally high base effect was at play for the poor outcome in the previous month. In fact, most have overlooked the 6.2% MoM sa expansion in the same month. June’s figure will be more reflective of the challenges on the external front amid the impact from the trade war. While electronics could continue to remain the key drag, non-electronics products may hold up. The outlook, though not as sanguine, aren’t that dire either.