The absence of fresh pro-consumption measures in the Budget surprised, but investments received a push via foreign capital.
Radhika Rao17 Jul 2019

We met corporates and tax practitioners across cities in India last week, discussing the FY20 Budget nuances. While the absence of fresh pro-consumption measures surprised most, there was equal interest in gauging the drivers for the investment push, including setting the ground to tap external savings by encouraging foreign inflows. Key amongst these was an emphasis on attracting more portfolio flows, encourage direct investments and explore a debt sovereign bond issuance.

The latter was one of the recommendations of the H. R. Khan committee, with any transition to merge the two segments - FPIs-NRIs – likely to involve more groundwork: a) a uniform regulatory framework as FPIs are governed by the securities regulator, while NRIs fall under the central bank and deal with their designated banks; b) NRIs have a wider investment basket, which include bank deposits, real estate etc. vs pure investment options. c) differing investment caps on NRIs vs FPIs; d) varying KYC norms and licenses required for the two classes of investors, amongst others. Further discussions between the H.R. Khan panel, policymakers and regulators are likely.

Some of the cheer on higher FPI inflows is, however, dampened by an impending increase in the tax incidence. The government’s announcement to raise the surcharge on taxable incomes of between INR20mn to INR50mn and above INR50bn brackets of taxpayers will raise the tax burden on FPIs, who are invested as non-corporates i.e. trusts, group of individuals or Association of Persons, encompassing Alternative Investment Funds (AIFs) in Category III of the investor category. 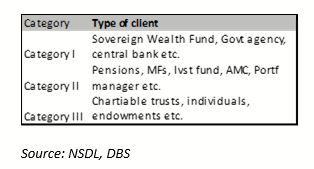 As a remedy, tax officials called on affected FPIs to migrate to a corporate structure, but this will be an uphill task. Pain points include the need for operational and regulatory changes, trusts are registered across various jurisdictions making it a challenge to change format just for a country, and finally, a risk that any restructuring moves to avoid taxes might attract the scrutiny of the GAAR (General Anti-Avoidance Rule). Expectations are that the Finance Ministry might take out the sting of this tax burden in the coming weeks. Till then, the higher tax incidence might hurt interests at the margin, but we don’t anticipate a wider sell-off.

Portfolio inflows have been strong with ytd foreign portfolio investors (FPIs) at a strong USD12bn with a mix of equity and debt flows. With global central banks signalling a return to the loose monetary policy regime and liquidity likely to stay flush, countries to the likes of India with attractive returns and political stability will draw-in flows. This might, however, not translate into a stronger currency as the central bank prefers to accumulate reserves.

Budget proposals also target increasing FDI. Plans include relaxing investment thresholds for insurance intermediaries (up to 100%), insurance sector, aviation, animation, visual effect, gaming & comics sector. If approved, for the airlines sector, this change might improve the sale prospects of a national carrier and another distressed asset sale. Add to this, relaxation of civil aviation and licensing conditions will provide the much-needed boost to the debt laden sector. 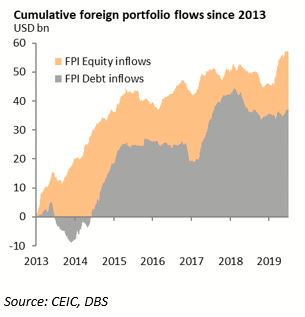 Easing local sourcing norms for FDI in single brand retail trading is another consideration, either via lower percentage of inputs from domestic sources or relaxing the timeline to adhere to this requirement. Other potential changes also include lowering net owned fund requirements and enable foreign reinsurers to open branches in the International Financial Services Centre (IFSC).

India drew record gross FDI inflows at USD64bn last year, within which equity inflows moderated slightly, mainly due to lower flows into telecom, power and pharma sectors, despite the hurdles being lowered by way of relaxation of thresholds and brought under the automatic approval route. Few of the problems were sector-specific, for instance the telecom sector where a strongly competitive domestic market and prospect of lower profitability, led foreign players to either consolidate or pare back their presence. Amongst the source countries, Singapore replaced Mauritius as the main source of inflows, whilst flows from the US improved after a drop the year before. 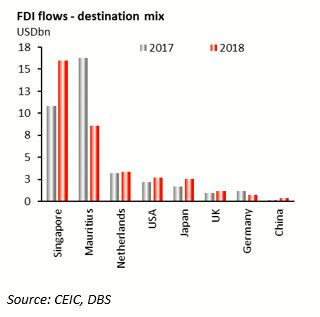 Finally, the government announced plans to tap the offshore borrowing market. This has divided market participants and policymakers, with few ex-RBI Governors speaking against such an issuance. Former RBI Governor Rajan highlighted in a recent editorial that any such foreign currency debt issuance has “no real benefits and enormous risks” [1].

Rupee sovereign debt market is dominated by domestic players, with commercial banks making up around 40% of the market, a quarter by insurance companies, and rest comprising of mutual funds, primary dealers, FPIs, central bank, etc. The sizeable quantum of India’s annual borrowings (net borrowings ~INR4-5trn or USD75bn), and the need to manage interest payments, justified keeping the market insulated from external volatility in the past. 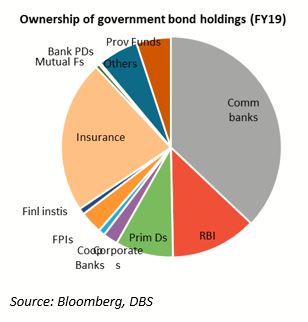 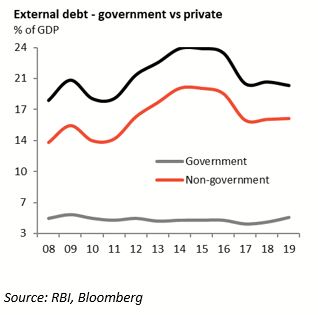 There are two sides to this coin. With an offshore bond issuance, the government intends to tap a new investor base, lighten domestic issuance, and take advantage of India’s relatively lower government external debt to GDP ratio. But there are pitfalls: a) exchange rate risk is borne by the government; b) small net savings on cost on hedged basis; c) another avenue for external volatility to permeate through to domestic markets; d) risks of cannibalising portfolio debt inflows; e) increase in external debt (foreign reserves are 70% of total external debt). As a compromise, there is also a suggestion that instead of tapping offshore borrowings, the FPI ceiling on debt could be raised to attract more flows.

These are pertinent risks, which will require this option to be tread with care. The skewed nature of portfolio flows i.e. lower debt to higher equity flows (for every INR1 debt inflows, there are INR7 into equities), there is room to open the door to dollar debt. The backstop of high FX reserves stock is another positive, provided total quantum of issuance is kept at manageable levels. Speculation for a USD10bn issuance has surfaced, likely in 2H FY20 (Oct-Mar). In our view, the quantum in FY20 is likely to be smaller (~USD3-5bn), given the time remaining and a maiden foray into sovereign offshore debt. Global demand for Indian papers will be strong in this environment where negative yielding debt has expanded to USD13-14trn and yield hungry investors watch for EM/ Asian region which are less affected by the trade conflicts.

India’s macro-vulnerability markers – sub-target inflation, sub- 3% current account gap, narrowing fiscal deficit target and record high reserves, have improved. Short-term and sovereign external debt levels are manageable, but FX reserves accumulation is bound to remain a priority to ensure better coverage of total external debt levels. The true test of might will be in midst of a strong US dollar or a worsening global outlook in additional to heightened global volatility.