The decision by the US FOMC to cut the policy rate and end balance sheet runoff two months earlier than envisaged is just the first of several easing measures by major global central banks.
Taimur Baig, Radhika Rao02 Aug 2019

This week’s decision by the US Federal Reserve’s Open Market Committee to cut the policy rate and end balance sheet runoff two months earlier than envisaged is just the first of several easing measures by major global central banks. Given the signals provided by outgoing President Draghi, the European Central Bank is likely to follow soon with deeper negative rates and additional quantitative easing measures in the coming months. Also, in its latest policy meeting, the Bank of Japan indicated that it will not hesitate to add more stimulus if economic momentum softens

We have therefore reached a transition phase; after a few years of policy normalisation and quantitative tightening, global markets are now poised to receive additional liquidity.

There are two likely ramifications of this shift in stance. First, although economic momentum is faltering in China, Europe, and elsewhere, and trade uncertainties are likely to remain heightened, lower rates and additional QE will support risk assets a tad longer, and possibly extend the economic cycle past 2020. Second, although yield differentials are substantial, the additional liquidity may draw attention back to the USD trend.

One Fed rate cut not enough for markets

From rate hike in December 2018 to rate cut in July 2019, the US Federal Reserve has undergone a remarkable about-turn. After the conclusion of the July 30-31 FOMC meeting, the policy statement and Chair Powell’s press conference suggested the following: 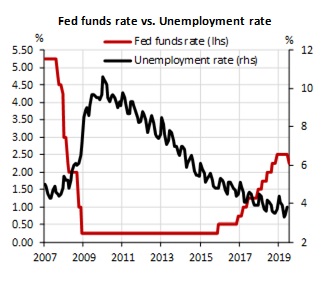 • Recognising that a further dovish signal is needed, the FOMC decided to conclude the reduction of its aggregate securities holdings (so-called “balance sheet runoff) in August, two months earlier than previously indicated.

• By stating that it is ready to “act as appropriate to sustain the expansion,” the FOMC has left room open for further rate cuts, but the focus on the strength of labour market, retail sales, and overall resiliency of the economy means there is no hurry to cut rates.

• Two Fed members voting against the rate cut, and Chair Powell’s assertion that this is not a protracted cycle were clearly contrary to market expectations, although we found both such aspects of the FOMC meeting outcome rather reasonable.

We have stated for long that the Fed’s dovish tilt can lead to unintended consequences by creating a strong feedback-loop between the markets and the US central bank. By cutting rates at a time of record high employment, frothy asset markets, rebounding consumer sentiment and housing, the Fed has pushed itself into a corner, in our view.

In fact, the markets need not fret much. All that’s needed for another Fed funds rate cut is no resolution in trade wars (quite likely) and listless asset markets for a few months, in our view. Given that the US equity market has rallied by 19% this year (even after the July 31 selloff), a catalyst-starved market that is flat or weak ahead is quite likely, in our view.

The tussle between strong data and poor market sentiment would take a few months. The next rate cut will come in December, in our view. We expect no further rate cuts in 2020, given the proximity to elections, likely trade war truce, and possible firming up of inflation. We will however concede that the outlook is shrouded in uncertainty, and what happens in 2020 is hard to pin down just yet.

We don’t see appreciable curve steepening ahead, unless inflation were to rebound in the coming months. Fiscal slippage and strong growth would be insufficient for inflation expectations to rise, under present circumstances. The long end of the curve will remain supported given the paucity of safe, positive yielding bonds in the G3 space.

The USD will likely remain strong among weak outlook for China and Europe and substantial yield differential in favour of the US. Even if the US treasury were to engage in intervention, there is little near-term downside for the dollar, in our view.