Philippines: Expecting another 50bps of rate cut this year

Photo credit: AFP Photo
Rate cut room is widening for BSP, in our view. Growth slowed significantly in 1Q19, due to tough external conditions and 2019 budget impasse. In addition, US-China continuous trade tension could prolong pressures to emerging markets, including the Philippines. We think BSP is likely to cut policy rate by 25bps on Thursday and another 25bps cut is likely later this year.

Markets have already priced in monetary easing. The local rates curve has bull steepened in the 5Y tenor and below, which has dropped by more than 100bps since the last policy rate cut on May 9th. Governor Diokno’s latest statement supports this expectation, as he mentioned that further cuts amounting 50bps are expected this year.

Growth is likely to remain under pressure from both external and domestic factors. From the domestic side, this year’s budget impasse has negatively impacted government infrastructure spending, which was growing at double digit rate last year.

From the external side, trade balance has remained weak (YTD trade deficit reached -USD16.5bn in May vs -USD15.7bn same period last year). We see more risk for trade balance to weaken further in 2H19 as trade tension is unlikely to subside. Recent CNY depreciation could trigger further increase in tariff on Chinese goods by the US (could reach 45%).

The biggest hit to trade would be caused by weaker exports to the US (15%), China (12%) and most importantly intra-Asian except China (51%). Yet, slowdown in imports could provide some relieve to trade deficit, especially as domestic demand remains limited.

2Q19 GDP data will be out this Thursday. Leading indicators point at mixed results in 2Q19, with business and consumer confidence improving, but motor vehicle sales weak. In addition, industrial production and PMI appear to have bottomed.

Recent rate cut by 25bps on May 9th, and 200 bps cuts in reserve requirement (from 18% to 16% on May and July) which has freed up an additional PHP200bn into the system, have not translated to eased domestic liquidity condition yet. Money supply growth (M3) has been relatively flat at around 6.3% in the past two month (the recent rate cut was on May 9th) and bank loan growth decelerated further.

Part of the reason could be due to the government’s infrastructure projects absorbing banks’ excess liquidity. Current easing cycle might need another 3-4 quarters before liquidity condition ease in a substantive manner. In the meantime, fiscal support is needed to provide cushion for growth this year.

Inflation is expected to ease further this year, thanks to stable food and oil price. CPI has continuously eased this year, reaching 2.7% YoY in June from the latest peak of 6.7% in October last year. We think inflation will continue to ease (at least through October), giving space for monetary policy easing.

Rates Strategy: From bullish to neutral

The 10Y Philippine government bond (RPGB) is one of the top-performing government bonds globally, having returned approx. 25% this year. When we look at various proxies, risk premium in RPGBs appear to have compressed a lot and current levels are probably too tight. 5Y CDS on Philippine government bonds (proxy for credit risk) are currently trading at 54bps, extremely low for a BBB-rated and twin-deficit sovereign credit (CDS on AA-rated and twin-surplus South Korea are trading at 33bps, a meagre 21bps lower). Spreads between PHP NDF and onshore DF (proxy for FX risk) have been tight, suggesting that markets are expecting little depreciation pressures on the PHP. In 2019, RPGB’s yield spread to US Treasury (proxy for broad risks) has declined 155bps, much more than Asian peers.

In our view, the magnitude of compression in RPGB’s risk premium has been incommensurate with the moderation of inflation. Ultimately, with much of DM in negative yields, dovish global central banks have given investors the confidence to reach for yields, benefiting high-yielding EMs like the Philippines.

With little room for risk premiums to compress further, from this point on, we think lower Philippine rates would have to be chiefly driven by lower US rates. Outperformance vs Asian peers is unlikely to extend, and thus we revise our RPGB call from bullish to neutral. Taking duration risks in RPGBs (via 10Y) is no longer attractive though we think it is ok to hold the shorter tenors (e.g. 2Y) just for carry (curve is flat anyways, more BSP easing is likely to benefit the front-end more).

In light of recent escalations in US-China trade war, the external environment has turned less supportive for Asia high-yielders. Philippines' economic exposure to US-China trade is certainly small. But compared to Asia low-yielders, Philippine bonds are much more vulnerable (less resilient) to deteriorations in global risk sentiments or volatility in financial markets. This is especially considering RPGBs’ yield buffer is now much lower relative to 2018. 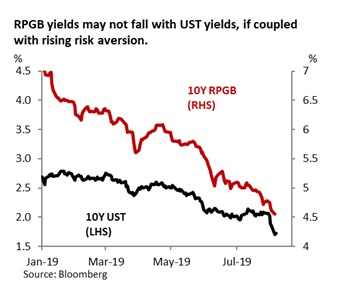