Before the early August re-escalation of trade wars, China and US data were improving, while data from EU were particularly weak.
Samuel Tse13 Aug 2019

Before the early August re-escalation of trade wars, China and US data were improving, while data from EU were particularly weak. Fiscal stimulus and monetary support have kept China’s growth momentum from weakening further, while US data over the past two months showed resiliency in housing and consumption. Investment has been weak across the board, however. The concern is that with asset markets selling off and no end in sight of trade wars, the data will turn soft in a broader range of indicators. 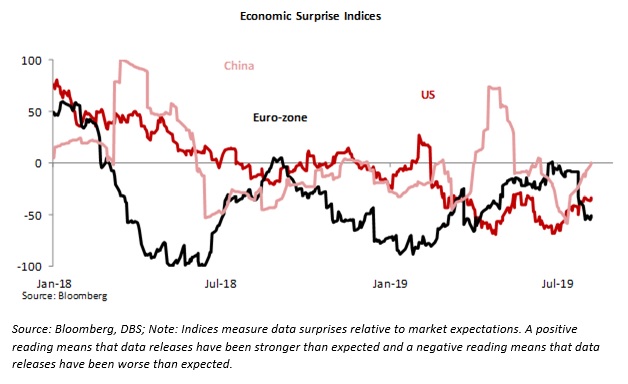 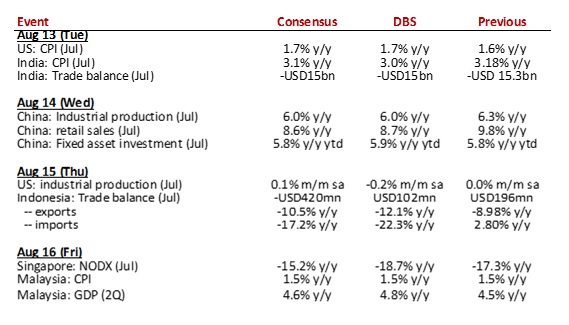 China: Domestic demand is expected to ease further in July as suggested by the contracting NBS Manufacturing PMI (49.9). Retail sales growth should have softened to 8.7% YOY in June from 9.8% in June due to a weakening labour market. Industrial production, likewise, is expected to fall to 6.0% from 6.3% amid a moderating global demand and trade tensions with the US. On the contrary, fixed asset investment growth is forecasted to edge up to 5.9% from 5.8% on the back of accommodative monetary policy and fiscal support.

India: Price pressures were likely contained in July, with CPI inflation expected to rise 3.0% YoY a shade lower than June. High-frequency data on staples and food products is mixed, with few pockets higher due to heavy yet irregular rainfall hit supplies of perishables, while that of cereals and foodgrains eased. Oil prices have pulled back due to tougher global demand outlook, keeping a lid on communication and transport costs. This month, the RBI’s monetary policy committee (MPC) voted to lower the Repo rate by 35bp to 5.4% vs consensus at 25bps cut. Weak growth, policy rate cuts and (assumption) of a normal monsoon are expected to see inflation at sub-target levels for next four quarters underscoring their dovish bias. Separately, July’s trade deficit is expected to stay high, above USD15bn for a fourth consecutive month.

Indonesia: Trade deficit widened to -USD322mn (until Jun19) from same period last year at -USD199bn. Exports growth has turned negative (on average -8.6% YoY from 9.9% in 1H18). Imports have eased as well, but not enough to compensate for export slowdown. In fact, trade deficit reached -USD2.3bn in Apr19, but has since turned positive. In terms of volume, exports growth, 3mma, is still higher than imports. Hence the widening divergence is due to deteriorating terms-of-trade. Oil and gas (O&G) balance (3 months moving sum) have been relatively better than the non-O&G balance. Current account deficit widened to 3.04% of GDP in 2Q19 from 2.6% in 1Q19, just as financial flows weakened to 2.5% of GDP from 3.7%. We expect Jul19 trade balance to remain slightly positive at USD102mn vs USD196mn in Jun19, with exports contracting -12.1% YoY and imports at -22.3% YoY.

Malaysia: Second quarter GDP growth and July CPI inflation are on tap this week. Growth in the second quarter is expected to see a modest pick-up to 4.8% YoY, from 4.5% previously. The main drag will likely be net exports. Like in many emerging Asian economies, export and industrial output growth have dipped in recent months. This can be attributed to the trade tension between the US and China, and a broad-based slowdown in global demand. Malaysia will be no exception.

However, the silver lining is that domestic growth should hold up. Investment could see some improvement as infrastructure projects are now back in the pipeline. Import growth for capital goods has picked up, which may suggest impetus on some of the developmental projects. Separately, consumption growth could improve as the GST refunds by the government are underway, which offsets challenging labour market conditions. The pre-emptive rate cut by Bank Negara may also help to support spending and investment.

Meanwhile, CPI inflation should remain steady at 1.5% YoY. As effects from the post-election policy changes, including the zero rating of the GST, subsidies for petrol and removal of toll charges fade from June onwards, inflation should revert to a normalised path. Inflation will likely remain range bound between 1.5-2.0% in the coming months.

Singapore: Non-oil domestic export figures for Jul19 will likely continue to disappoint. The headline number is expected to register a decline of 18.7% YoY, down from 17.3% previously. The renewed hostilities between the US and China on the trade front will likely be manifested on the trade data. Global demand for electronics has also remained weak, which will continue to weigh down on export outlook. PMIs of key markets have unanimously been trending lower whereas shipment of semiconductors and billing for semiconductor equipment have also continue to contract. External economic conditions have been exceptionally challenging and there is no respite in sight for exporters.