Most high frequency indicators suggest that the 1Q19 slump extended into 2Q and set the stage for a subdued third quarter. On the consumption end, durables goods output weakened in first half of the year, while non-durables held-up. Subdued production reflects subpar sales - passenger vehicle sales are down 15% in 2Q, deeper than the extent of decline in the three prior quarters. Rural demand has also been under a cloud as two-wheelers are down 10% in 2Q, just as wage growth moderated after a firmer start to the year. Factors driving the poor outcome for the sector include weakness in real demand, tighter financial conditions, decline in loans from non-banks as the latter faced liquidity issues and are in midst of pruning their liability mix. Operational costs have also risen on higher registration, insurance and emission related costs. On the regulatory end, India is due to upgrade to advanced emission standards referred to as Bharat VI, which take effect April 2020 onwards. The global landscape is also cloudy. Besides stricter emission standards, demand is evolving by way of a rising ride-sharing sector, leasing and subscription business, and sops for electric/ alternative fuel vehicles, disrupting the sector. 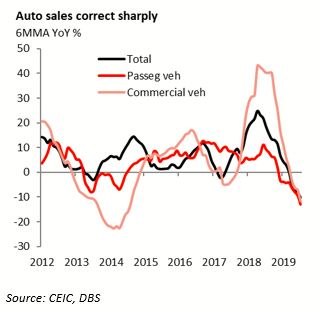 2Q19 (1QFY20) GDP release is due later this month. Growth will likely remain below 6%. 3Q growth is also likely to stay weak but stabilise as government spending resumes after the elections. An accommodative monetary policy stance accompanied by a jumpstart in the transmission process is also expected to lower lending rates. Despite a better 3Q, evolving trends lend downside risk to our forecast. 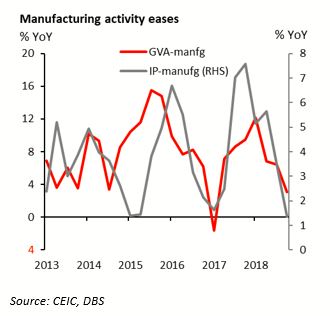 This week’s July inflation was broadly unchanged at 3.15% YoY, with food higher while fuel declined sharply. FY20 average is tracking 3.1%, well below the 4% policy target. Core inflation unexpectedly ticked up 4.3% YoY in July, after decelerating for eight successive months, due to cost-push pressures rather than a strong revival in demand.

At its early August meeting (see here), the RBI MPC’s move to revise down growth and sub-target inflation until mid-2020 reflected its dovish bias. We see room for at least another 15-25bps cuts in 4Q19, as growth assumptions are likely to be lowered in subsequent reviews. Transmission was jumpstarted after the RBI cut was followed by a handful of domestic banks lowering lending rates and few introduced sector-specific loans linked to the repo rate. An easier monetary policy combined with surplus liquidity (of ~INR2trn) is likely to expedite transmission in second half of the year as well, providing relief to sectors that face tighter financial conditions. 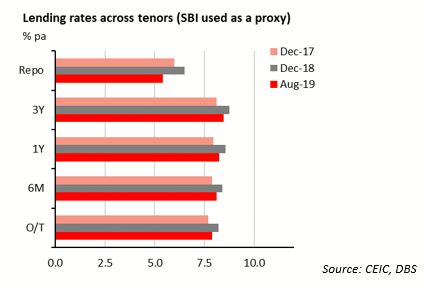 Is a coordinated (fiscal and monetary) policy response likely?

In our view, an economy-wide stimulus package is unlikely, given the sizeable fiscal costs and increased scrutiny on the math (see here). Hence, sector-specific support is more likely, particularly automobile sector (given strong backward linkages to suppliers and employment), small and medium enterprises, non-bank financial companies (already underway through piecemeal measures), and real estate/construction industry. Support for farmers was extended earlier in the year, amounting to ~INR750bn (0.4% of GDP). Apart from pushing for FDIs, some tax relief is likely for foreign portfolio investors. Since July’s Budget, benchmark equity markets have declined by over 5% following pockets of tax increases.

While the intentions are commendable, room to sharply increase spending, without comprising on fiscal consolidation, is limited. Budget numbers already rest on optimistic revenue assumptions. As a percentage of GDP, gross tax revenues are pegged to rise to a decade high of 11.7% vs 11% in FY19, while net collections are seen at 7.8% vs 7% year before. Achieving this in an environment of slowing growth will be an uphill task, rendering the projected nominal GDP growth as a challenge.

To make up for this shortfall, cess and surcharges have been increased (falls under the revenue pool that is not shared with states), record high divestment target and increased reliance on dividends from PSUs and the central bank. GST implementation had pre-assumed tax buoyancy and revenue neutrality, which are still to play out with the current system.

We are also mindful that as a final recourse and if growth disappoints sharply, a clause in the FRBM Act that allows for a deviation of up to 0.5 percentage points of GDP could be tapped, which essentially provides the leeway to spend an additional INR1.15trn this year, according to local press reports [2]. This is, however, not necessary as yet. Slippage risks, if any, will nonetheless leave the central bank wary of lowering rates aggressively.

For the markets, bond investors will watch fiscal developments closely, while INR stays glued to global catalysts. Absence of an aggressive stimulus program, while the central bank remains focused on policy transmission, will restrain a sharper rise in yields. Global yields also look set to remain low for longer. USDINR, meanwhile, continues to watch CNY movements and broader dollar bias. Overnight relief by way of a temporary de-escalation in the China-US trade war strengthened the CNY, also lent relief to the AXJ currencies including INR. USDINR continues to track our DBS FX Strategist’s forecast of 71.0 for this quarter.