Bank Indonesia (BI) decided to cut the 7-day reverse repo rate by 25bps to 5.5% on 22nd August, taking the cumulative easing for the year to 50bps. The rate differential with the US is still competitive at this level and the rupiah has been relatively stable at around IDR14,200 range in the past week. In fact, YTD, the rupiah has outperformed most peers in the region with spot returns beside Thailand and Japan. 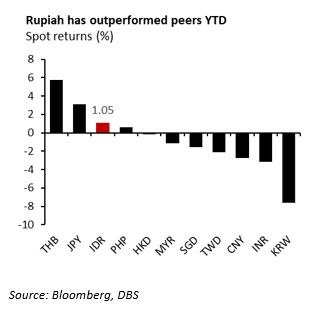 Slowing growth seems to be the main factor for the pre-emptive rate cut. Bank Indonesia sees growth falling below its previous forecast of 5.2% this year with the current account deficit to stay relatively wide at 2.5-3% of GDP. Inflation will remain benign, BI expects inflation to stay below mid-range of 3.5%. BI Governor Perry emphasized that BI will continue to maintain accommodative policy stance to support growth and is open to further macroprudential easing. We think Bank Indonesia could cut by another 25bps in 4Q19 to 5.25% this year.

President Jokowi also emphasized a new focus on improving human capital. In terms of budget, education spending is fixed at 20% by law. The new emphasis on human capital will likely affect spending quality and priorities, not the amount being allocated. The focus on human capital is critical as Indonesia’s education quality remains low among peers.

There is enough budget space to support growth in the short run. Fiscal policy could play an important role to cushion the current slowdown at a time when monetary policy transmission is constrained by somewhat tight liquidity conditions.

Moreover, even though external debt has been accelerating since last year, Indonesia is still relatively under leveraged, with total external debt to GDP (public and private) barely reaching 36.2% of GDP in 2018. 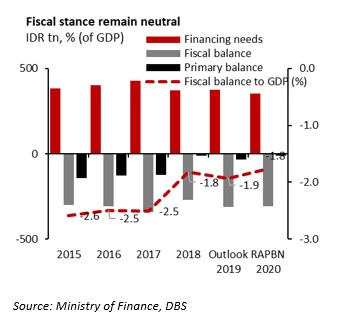 Further easing from Bank Indonesia (BI) over the coming months should continue supporting Indo govvies. Amid a persistently wide current account deficit (it has been in excess of 3% for two consecutive quarters), BI has been understandably reticent in easing policy compared to peers, cutting rates by just 50bps thus far this year. By contrast, the central bank hiked by a cumulative 175bps in 2018. A further unwind of tight monetary policy is in the offing but we suspect that BI would only be comfortable matching the same pace of rate cuts as the Fed going forward. External funding risks is still a concern in the current volatile environment.

Foreign flows will generally be supportive in the current low-yield environment (foreign ownership of Indo govvies has increased by more than IDR 1000tn year to date). 10Y Indo govvies offer close to 600bps of premium over similar tenor US Treasuries. We think current spreads are on the high side with only two instances (the global financial crisis of 2008/09 and China devaluation fears in 2015) in recent memory where spreads blew much wider. We argue that BI’s focus on rupiah stability and efforts to smooth out volatility in bond prices should provide comfort for investors. The current environment supports further yield declines across the curve. Shorter tenors (2Y, 3Y), which would be more clearly anchored by looser BI policy, are arguably a safer bet in what would likely be a steepening environment ahead. 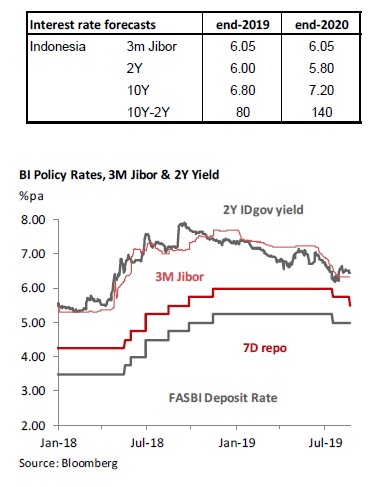 A resilient and stable IDR

We look for the Indonesian rupiah to remain within its stable 13900-14500 range this year. In contrast to last year, the rupiah has been notably resilient to last week’s plunge in the Argentine peso and the Chinese yuan’s depreciation since May.

Policy credibility in Indonesia has held up well compared to its emerging market peers. The re-election of President Joko Widodo was followed by a sovereign debt rating upgrade. On May 31, Standard & Poor’s upgraded Indonesia by a notch to BBB. Earlier in April, Sri Mulyani was named Finance Asia’s Asia-Pacific Best Finance Minister of Asia. She is expected to continue her role during Widodo’s second term. The fiscal deficit was, for the first year since 2012, likely to have narrowed to less than 2% of GDP in 2018.

Bank Indonesia is committed to rupiah stability via its accommodative monetary and macro-prudential policies. BI timed its rate cut on July 18, less than a fortnight before the Fed’s “insurance cut” on July 31. Today’s surprise cut was a sound decision against a dovish global monetary landscape. BI’s projection for a current account deficit of 2.5-3% of GDP in 2019-2020 is reasonable and may surprise on the upside. Pressures on external trade have been balanced by a 40% narrowing in the trade deficit and a 16-month high foreign reserves.