For India, developments on the US-China trade dispute and other protectionist policies, present both a challenge and opportunity.
Radhika Rao28 Aug 2019

This is an abridged version of our Thematic Report “Trade War and India: five factors to watch” (please download the pdf for the full report) 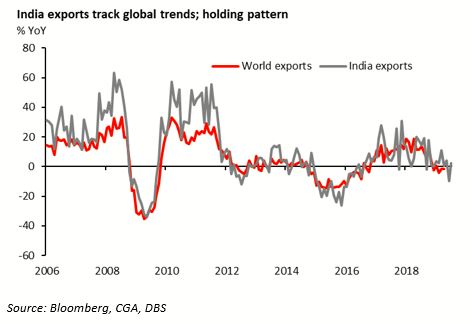 In the past decade there have been three bouts of weak trade performance, worst amongst which was the plunge during the global financial crisis. That was followed by flattish growth until two years back before stronger growth conditions in the G3 space higher in 2016-2017 and turning south since in the past year. Regressing past data suggests that for every one percentage point increase in global exports, India’s shipments tend to rise by half that much and vice versa. Hence, scaling back in global trade expectations is a pertinent risk for India’s trade, even as its stronger domestic sector helps neutralize some of this weakness.

2. The fallout from US-China trade conflicts

India’s direct exposure to the US and China is modest compared to its regional peers. China (5%) and US (16%), totally account for a fifth of total merchandise exports. By contrast, regional economies are more exposed, particularly Taiwan, South Korea and Vietnam where a cumulative ~40% of their total exports head to US and China. 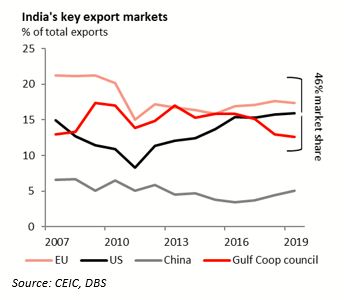 Between the two, India is more exposed to the US, even as their bilateral trade surplus has been narrowing in recent years. Despite this, India’s overall trade balance is in deficit, led by a sizeable gap with China. India could increase its trade footprint in midst of the US-China trade conflict, particularly under categories on which US has imposed tariffs on China.

Apart from trade, diversion in investment flows is an opportunity that India could benefit from, as manufacturers seek alternative origination destinations. US FDI into India jumped in 2018, accounting for 6% of total investment flows. There has been also notable pick-up in flows from China. Larger gains are likely in the medium-term as India continues to work on easing FDI regulations.

3. US has also initiated direct action on India

Apart from the collateral impact, the US has also initiated protectionist action against India, as the latter runs a trade surplus with the US. The US withdrew favourable treatment meted under the Generalised System of preferences (GSP) on India earlier this year. We had noted here (PDF, HTML), that the impact on exports (nominal terms) is modest as GSP makes 10% of India’s exports to the US and a small 1-2% of overall India’s exports. There has also been disagreement on market access, with US’ expressing concern over restrictions on foreign companies in the e-commerce and retail space, sector-specific regulations in pharma and dairy, data localization rules, etc. These have strained trade relations but both parties continue to negotiate to reach a common ground.

India retaliated by imposing counter tariffs on 28 products imported from the US, reacting to the withdrawal of the duty-free imports scheme. The product groups which include agricultural items, are expected to fetch USD217mn in revenues according to the Indian press. In response, the US initiated a WTO dispute against these duties as they held India’s moves as inconsistent with provisions of the WTO's General Agreement on Tariffs and Trade by unfairly discriminating against US imports vs other members. Ensuing a larger threat, the White House has also threatened to pull the US out of the WTO, as the organisation’s dispute settlement mechanism as well as system by which countries are declared as ‘developing’ (eg. India and China) is being perceived as being discriminatory.

4. India has its own closet of protectionism

At its stage of development, it is not surprising that India has undertaken protectionist actions, via commercial and trade interventions in recent years. Data from the Global Trade Alert database highlights India as amongst the top few countries with the highest number of restrictive trade practices, even after adjusting for liberalizing measures. The top five sectors that have faced tightening measures include basic organic chemicals with over 100 interventions, followed by products of iron and steel, basic inorganic chemicals, wearing apparel, and other fabricated metal products, amongst others.

5. Increasing influence of CNY movements on the Indian rupee

After a stable 1H19, the Indian rupee has weakened more than 4% vs USD in 3Q, under pressure from broad US dollar gains. We also note the rising influence of the Chinese yuan’s movements on the Indian rupee, with a sharp rally in the USDCNY past 7.0 last month, contributing to USDINR testing past the 70-71 mark. We conducted an empirical study to assess if there is indeed a linkage between the CNY and INR, compared to other G3 counterparts. To neutralize a one-sided bias, we base all key currencies (INR, USD, EUR, JPY and CNY) on a common base currency i.e. Swedish Krone. Using daily data over the past five years, we regressed the data to establish correlations.

As a counter to tough global conditions, domestic policies will have to constructive to revive demand. Righty so, the Indian government announced several sector specific measures recently (see here). This marks a coordinated policy response, after the central bank lowered rates by 110bps so far this year (see here and here), in response to a slowdown in the past four quarters and growth slipping to 5.8% YoY at the start of this year.