Photo credit: AFP Photo
Inflation has persistently surprised on the downside in recent months. July CPI inflation eased further to 0.4% YoY, from 0.6% previously. Besides the headline number, core inflation has also moderated. July core inflation dipped to 0.8% YoY, from 1.2% in the previous month. This is the lowest reading since Apr16.

On the moderation in the headline CPI inflation, the Monetary Authority of Singapore (MAS) pointed out that this was “largely on account of a decline in the cost of retail & other goods, a steeper fall in the cost of electricity & gas, as well as lower services inflation.” The introduction of the Open Electricity Market (OEM) has helped to lower utility costs. E-commerce is also probably having an impact on retail prices. Beyond that, lower oil prices (down 12-15% YoY in July) have helped to partially offset higher COE premiums, hence moderating transport inflation. 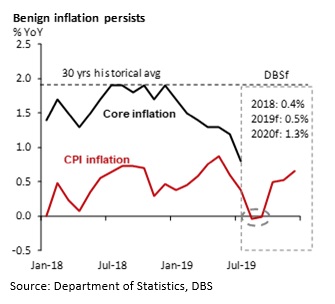 Though the lower inflation is a confluence of many factors, both domestic and external, we reckon that the over-arching reason for the lower inflation is slower growth. GDP growth in the second quarter slumped to 0.1% YoY, the weakest since the global financial crisis period in 2008/09. On the margin, the economy contracted by 3.3% QoQ saar. A challenging global economic climate, compounded by the ongoing trade war between the US and China, are the key drivers behind the subpar growth performance.

Weaker growth momentum is weighing down on inflation. The surprise dip in core inflation is by no way a mere coincidence. Core inflation does not include private transport costs and imputed rental, and hence, is typically considered a better measurement of underlying price pressure since it is not subjected to the policy effects from changes in COE premiums and property cooling measures. 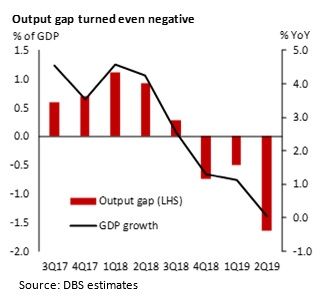 Our analysis suggests that output gap has turned even more negative in the second quarter. This implies an increase in risk of disinflation as a result of the decline in growth impetus. If this persists, which is likely given the current economic conditions, overall inflation in the coming months will turn out significantly lower than expected. There is a risk that headline inflation could touch zero or dip into negative in the next two months.

Though base effect from the OEM could fade towards the end of the year, resulting in possible uptick in inflation, overall trajectory on inflation will still be lower given the negative output gap. With this in mind, we now expect 2019 full year inflation to register 0.5% (from 1.1% previously), which is also at the low end of the official inflation forecast range of 0.5-1.5%. Separately, we expect core inflation to average 1.1% for the year, down from our previous forecast of 1.3%.

Against the backdrop of a grim economic outlook, negative output gap and benign inflation, a change in a parameter of the policy band in October is pretty much cast in stone. The SGD NEER is gradually shifting towards the mid-point of the policy band, suggesting that adjustment in monetary policy is on the cards. The key question is the shape and form of the forthcoming policy easing, and there are a few options available for the authority. 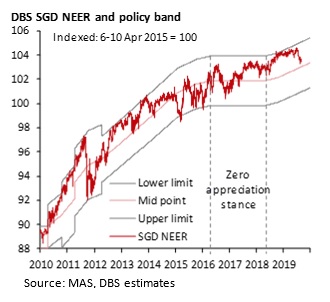 We reckon that MAS will moderate the slope of the SGD NEER policy band in a calibrated manner. Though there is room for a more pre-emptive and aggressive monetary policy action, such as shifting towards a zero-appreciation stance, there are several considerations for that to happen. For example, the economy may have to dip into a technical recession in 3Q, and risk entering an all-out recession in 2020 to warrant such an action; or that global outlook deteriorates sharply in the coming months, thereby prompting global central banks to ease monetary policies more aggressively.

Unless these factors pan out in the coming months, the MAS can still afford to take a more calibrated approach in managing its monetary policy. Furthermore, the fact that the government has yet to announce any short-term stimulus package does suggest that authorities are not in a “crisis management” mode yet.

The exchange rate based monetary policy regime adopted by Singapore is also more suited for managing the balance of risks between inflation and growth on a medium-term basis, rather than for short term counter cyclical purpose. In this aspect, we do expect a robust expansionary fiscal policy in the upcoming budget early next year. The outsized accumulated surpluses of more than SGD 15bn would allow policymakers to focus on both near term counter-cyclical, as well as long-term economic transformation purposes.